The petition was posted on change.org Tuesday and had 441 signatures as of Wednesday evening. It points directly to posts allegedly made by Patricia Jannuzzi, a theology teacher at Immaculata High School in Somerville, and has caught the eye of actress Susan Sarandon and former "Real Housewives of New Jersey" cast member Greg Bennett.

"Mrs Jannuzzi's facebook is a religious curtain covering hateful message," the petition reads. "The homophobic and short-sighted posts are disturbing and degrading."

In a statement, the school said it took "immediate action" and "mandated that the teacher involved permanently de-active her Facebook page."

"The opinions reflected in these posts do not in any way represent the philosophy, mission or student experience of this high school," the statement said. "... Through our investigation, we have determined that the information posted on this social media page has not been reflected in the curriculum content of the classes she teaches."

Jannuzzi's Facebook page, which was public at one point, was removed Wednesday morning.

Thomas Robinson, a 2001 graduate of Immaculata, said he was "taken aback" after seeing one of Jannuzzi's posts and decided to create the change.org petition.

This nightmare dumpster human taught me in high school, and still teaches there. Keep it classy, Immaculata pic.twitter.com/CD9m6WlwOP

Bennett, a graduate of Immaculata in 2004 who is openly gay, is among several alumni who signed the petition and took a screenshot before Jannuzzi's page was removed. He tweeted out the screenshot to his 165,000 followers Tuesday.

"It worried me as someone who sat in her classroom," Bennett said, adding that any student who is questioning his or her sexuality shouldn't be subjected to that line of thinking.

Another alumnus, Scott Lyons, who is gay and had Jannuzzi as a teacher, shared a letter on Facebook he sent to her after reading one of her posts. He said in the letter that he remembers Jannuzzi's classes to be "focused on love and acceptance" but that he is "offended and disappointed" by her recent posts.

"While I respect the fact that people have different opinions on the matter what I can tell you from my heart is that I urge you to be careful with your words and the messaging you are putting out there," he wrote.

Lyons is the nephew of Sarandon, who shared the post with her 3,000 followers. 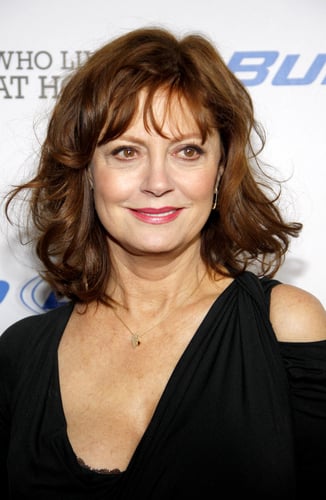 Susan Sarandon at the Los Angeles Premiere of "Jeff, Who Lives At Home" held at the DGA Theatre on March 7, 2012.

"So proud of my nephew Scott and the dialogue he started," Sarandon writes. " ... High school is a tough time anyway ... students don't need teachers making it even more difficult."

Immaculata said in its statement that the school is reviewing its social media policy with faculty and staff members.

"It is the policy of the school that all faculty and staff demonstrate respect and sensitivity to all people at all times and to avoid offending any individuals or groups," the statement said.

Hack deferred any comments to Kline. Messages left for Gallagher and Brennan were not returned.

Jannuzzi did not respond to an email and phone message seeking comment.

In April, the New Jersey School Board Associated updated its model policy on how schools should treat social media after Gov. Chris Christie signed a bill requiring local school boards to create policies. Districts could adopt a policy put forth by the NJSBA or create their own. Regardless, every district needed to have one within 120 days of Christie's signing the legislation.

Under NJSBA policy, any "problematic or offensive material" posted on social media should be brought to the attention of the board president.

Private schools, however, are not held to the same regulations as public schools and therefore are not mandated by the state to have social media policies.

Robinson said his goal isn't to get Jannuzzi fired. But he wants the school to promote awareness against hate speech in the future.

"She's entitled to her opinion as a person," he said, "but it shouldn't be accessible for her students to read that stuff."

(Alex Napoliello writes for The Star-Ledger and NJ Advance Media.)