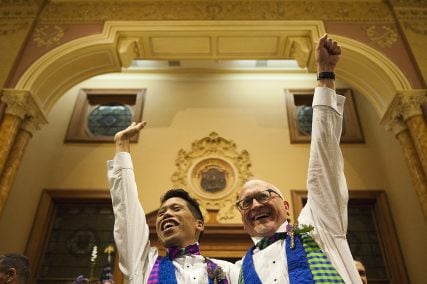 (Reuters) The Presbyterian Church (USA)  on Tuesday (March 17) approved a change in the wording of its constitution to include same-sex marriage, a move which threatens to further splinter one of the largest U.S. mainline Protestant denominations.

A majority of the 171 regional “presbyteries,” or local leadership bodies of the church, have now voted to change the wording of the constitution to define marriage as a commitment “between two people, traditionally a man and a woman.”

That change in the Louisville, Ky.-based church’s constitution was recommended by its General Assembly last year and required a simple majority of 86 votes, achieved on Tuesday, the church said.

The new wording, which replaces “between a woman and a man,” takes effect June 21.

The church, also known as PCUSA, has more than 1.7 million members, but has lost more than 500,000 over the past decade. Some church leaders have expressed concern that endorsement of same-sex marriage could cause an exodus of parishioners who see it as incompatible with biblical teachings.

A gathering of elders and ministers of the church voted last June to allow clergy to perform same-sex weddings. The move gave clergy the choice of whether to preside over same-sex marriages in states where they are legal, but does not require them to do so.

“Let us pray that we can allow the Spirit to continue to create in us a common call to follow Christ while respecting each other’s convictions,” Gradye Parsons, stated clerk of the General Assembly, said in a statement.

The Presbyterian Lay Committee, a conservative group, opposed the change in the definition.

“These are indeed difficult days for folks both within the PCUSA and other denominations that have made these same choices in the past,” said Carmen Fowler LaBerge, president of the Lay Committee, in a conference call on Tuesday.

David Gushee, a professor of Christian ethics at Mercer University in Atlanta, said that as with other denominations like the United Church of Christ that have changed policy on gay and lesbian issues, some congregants will be lost, but others will be gained.

“All across Christianity, we see the dominoes falling of abandoning the historic stigma and rejection of gay people and gay relationships,” Gushee said.

The U.S. Supreme Court agreed this year to take up the issue of whether states can ban gay marriage, which is now allowed in at least 36 states and the District of Columbia.