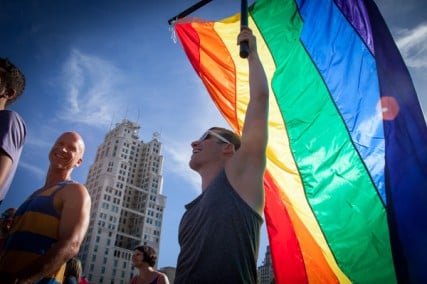 The owners of Memories Pizza in Walkerton, about 20 miles southwest of South Bend, said in an interview with ABC-57 that their Christian beliefs would prevent them from serving up pies at same-sex weddings.

“If a gay couple was to come in and say they wanted us to provide pizzas for a wedding, we would have to say ‘No.’ We are not discriminating against anyone. It is just that is our beliefs,” said Crystal O’Connor of Memories Pizza.

The owners were not immediately available for comment. The restaurant was not open for business on Wednesday (April 1).

Critics of the restaurant’s policy quickly slammed the pizza place on the Internet by posting thousands of negative reviews on its Facebook page and popular restaurant guides.

As of Wednesday afternoon, the pizzeria had over 1,600 recent one-star reviews on Yelp that criticized its stance on gay marriage.

“Would Jesus eat here? I think not. The only thing they have on the menu is hate!” wrote Bill from San Francisco.

The online fury was not limited to bad reviews.

A website not affiliated with the pizzeria was set up using the company name as a domain and featuring a phallic-shaped pizza to be catered at gay weddings.

Indiana’s Republican governor, Mike Pence, responding to national outrage over the state’s new Religious Freedom Restoration Act, said on Tuesday (March 31)  he would “fix” it to make clear businesses could not use the law to deny services to same-sex couples.

News
Churches hit home run with services in ballparks and stadiums as COVID-19 cancels sports
News
5 faith facts about Vice President Mike Pence: A ‘born-again, evangelical Catholic’
Opinion
Indiana tax preparer shows limits and liberties of our post-Masterpiece Cakeshop world
News
Pizzeria ordered to pay $4,500 for booting gay rabbinical student
News
Cameroon clergy condemn killing of American missionary
© Copyright 2020, Religion News Service. All rights reserved. Use of and/or registration on any portion of this site constitutes acceptance of our User Agreement and Privacy Policy, Privacy Statement and Cookie Notice. The material on this site may not be reproduced, distributed, transmitted, cached or otherwise used, except with the prior written permission of Religion News Service.