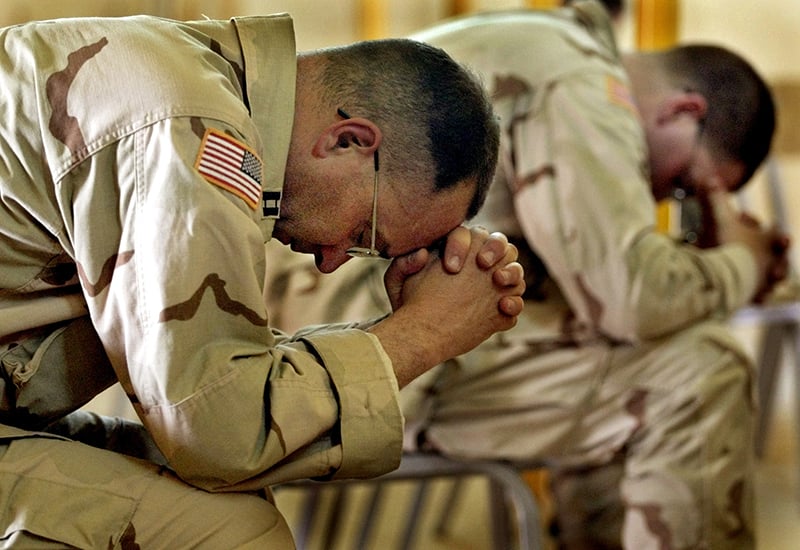 U.S. Army Chaplain Tim Meader, left, and Chaplain William Lovell, both from Fort Carson, Colo., bow their heads in prayer during an Easter service at Camp New Jersey in Kuwait on April 20, 2003. Photo courtesy of REUTERS/Adrees Latif
*Editors: This photo may only be republished with RNS-ARMY-CHAPLAINS, originally transmitted on April 9, 2015.

Chaplains who are part of the Army’s first line of defense against suicide say they need more training in how to prevent soldiers from killing themselves, according to a Rand Corp. survey published online Tuesday (April 7).

Nearly all the chaplains and chaplain assistants surveyed said they have dealt with suicidal soldiers, and most said they encourage troubled soldiers to get help. Because of confidentiality, roughly half said they would be reluctant to alert someone in the chain of command about the soldier, and roughly a third said they would not call a crisis hotline for the GI.

In addition, the study found that chaplains and chaplain assistants hold some of the same negative views about therapy that often discourage soldiers from seeing a behavioral health specialist. Most in the survey agreed that service members who seek help for suicidal thoughts would be seen differently by their peers. About half said they would be embarrassed.

“In this circumstance where people are going to them and using (them) like a behavioral health provider, let’s make sure they have a basic amount of competency,” said Rajeev Ramchand, lead author of the study.

Army spokeswoman Tatjana Christian said chaplains receive instruction in suicide intervention skills during their basic officer course. The Army Office of Chaplains is studying where there may be gaps in intervention practices, she said.

The Rand study was posted online Tuesday in Spirituality in Clinical Practice, which is published by the American Psychological Association. Researchers did an online survey of about 4,900 Army chaplains and chaplain assistants and based their results on validated responses from about 1,500. The authors said there is scant research on chaplains and suicide prevention.

Last month, the National Action Alliance for Suicide Prevention released a study complaining about “meager” investments to understand and prevent suicide, the 10th-leading cause of death in America, claiming 40,000 lives each year.

The alliance, a private-public partnership formed in 2010, noted that the annual U.S. investment of $72 million in suicide research pales by comparison with funding for other diseases that claim a similar number of American lives. Two examples cited by the group include $222 million a year for influenza research, a disease that kills 30,700 annually, and $304 million in hypertension studies for an illness that claims 56,000 lives per year.

The Rand study was paid for by the Pentagon, which is second only to the National Institutes of Health in funding suicide research. The findings were based on a 2012 online survey in which 41 percent of Army chaplains participated.