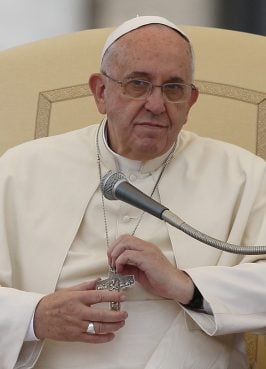 PARIS (Reuters) Pope Francis has held a private meeting with France’s nominee as ambassador to the Holy See, the French government said on Wednesday (April 22)  in the latest twist in a months-long stand-off over the Vatican’s failure to confirm his posting.

Paris nominated the government’s head of protocol, Laurent Stefanini, for the post on Jan. 5 but has still not heard back from the Vatican — a delay that French and Italian media have said is due to his homosexuality.

“There was a meeting between the Pope and Mr Stefanini,” government spokesman Stephane Le Foll told a regular briefing, confirming a report by satirical weekly Le Canard Enchaine but dismissing the newspaper’s assertion that his candidacy had been finally rejected during the April 18 meeting.

“Nothing has changed: France has proposed a candidate and for the time being we are waiting for the Vatican’s reply after the usual discussions and review of his candidacy.”

Neither the nominee nor the French government have made an official statement on his sexuality, the Foreign Ministry saying only his private life should be respected.

The Vatican has declined to comment on the matter, saying that an appointment is confirmed when the name is published in the official bulletin of the Holy See. It is extremely rare for the Pope to get directly involved the naming of ambassadors.

Earlier this month the French Catholic daily La Croix cited an unnamed source as saying the Vatican considered it a “provocation” that France’s Socialist government, which in 2013 legaliszed gay marriages, had proposed a gay man for the post.

Francis has maintained church teaching on homosexuality but struck a more sympathetic personal tone towards gay people. He met members of a Catholic gay rights group in the Vatican as recently as February.

But he has given no sign of easing rules against gay unions or changing the church’s teaching that homosexual acts are sinful, even if homosexuality itself is not.