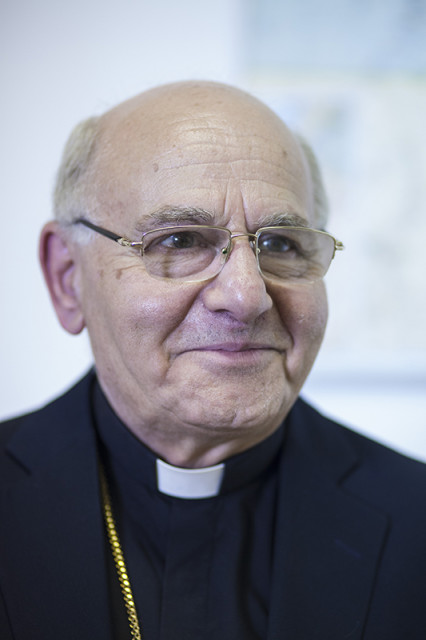 Greek-Catholic Archbishop Jean-Clément Jeanbart of Aleppo, Syria during a visit at ACN International Headquarter on July 15, 2014. Photo by Reinhard Backes, courtesy of Aid to the Church in Need
May 4, 2015
David Gibson

Greek-Catholic Archbishop Jean-Clément Jeanbart of Aleppo, Syria during a visit at ACN International Headquarter on July 15, 2014. Photo by Reinhard Backes, courtesy of Aid to the Church in Need

NEW YORK (RNS) Archbishop Jean-Clement Jeanbart of Aleppo is returning to the front line of the real war on Christians, which he calls home -- that is, Aleppo in war-torn Syria, where his ancient church faces the threat of extinction.

I wrote here about Jeanbart, who was in the U.S. last week in an effort to raise awareness about the plight of Christians in Syria -- they include his Eastern-rite Melkite Catholics as well or Eastern Orthodox and other churches -- and to raise money for their survival.

The archbishop is a remarkable figure, facing the personal danger while trying to protect an entire community and tradition and way of life. He had controversial things to say (at least in the U.S. political context) about supporting Syrian president Assad; when faced with ISIS as the alternative, you understand his "devil-you-know" choice.

But Assad may be at risk of falling. Americans are not likely to shed a tear for him, and many have been pushing the administration to aid the Islamist rebels, who could wind up slaughtering what's left of the Christians in Aleppo and elsewhere.

And American Christians know so little about their fellow believers in the region, or even that such Christians exist, that Middle East church leaders like Jeanbart face an uphill battle:

“We expect Christians in the West to help us. They do not,” as Jeanbart told Cardinal Timothy Dolan during the New York archbishop’s weekly radio show.

I couldn't include all of the interview in the first version, so wanted to pick it up here with the question:

What does Archbishop Jeanbart want?

In short, he thinks the West, led by the U.S., should work to stop the flow of arms into the country. He does not want Western military intervention in terms of boots on the ground – just a ceasefire so that Syrians themselves have a chance to work out their problems in a way that respects each community. That’s how it was for centuries, and he says that’s how it can be again.

Most immediately, he wants material support for Syrian Christians.

A chief problem, church officials say, is that Christians who are among the nearly 8 million internally displaced people in Syria are afraid to go to refugee camps that receive the bulk of international humanitarian aid because they would have to register to enter and could then be pegged as Christians – and would be targets all over again.

So Christians wind up trying to stay put in war zones, or seek refuge in churches, Catholic hospitals or schools, or the homes of relatives. (Aid to the Church in Need has pledged $2.8 in emergency aid for Christians in Syria.)

“The church will support us in a way, morally and spiritually. But the church has very little material means,” Jeanbart said. “It doesn’t have armies. It doesn’t have budgets to help. Nobody has ever taken care of us.”

“We expect Christians in the West to help us. They do not,” Jeanbart, his voice rising in frustration, told Cardinal Timothy Dolan during the New York archbishop’s weekly radio show.

Jeanbart said that on the other hand, his Muslim neighbors and religious leaders in the city have often offered him a place to live or hold services.

Jeanbart says the Vatican under Pope Francis has helped to put the Syrian crisis on the world’s radar, and he and the pontiff have spoken and corresponded.

The pope would like to visit, the archbishop said, and he would love to have him. But it’s impossible given the violence. “We do not want him to come now, no. We don’t want to expose him” to attacks.

Jeanbart is also at risk, but he is not about to leave Aleppo, or his job.

“I have no right to do that,” he said. “I feel the Lord is giving me strength.”

“I try to be very careful,” he added, when asked about the threat of assassination or kidnapping. “But sometimes it’s not too secure. I rely on the protection of the Lord.”