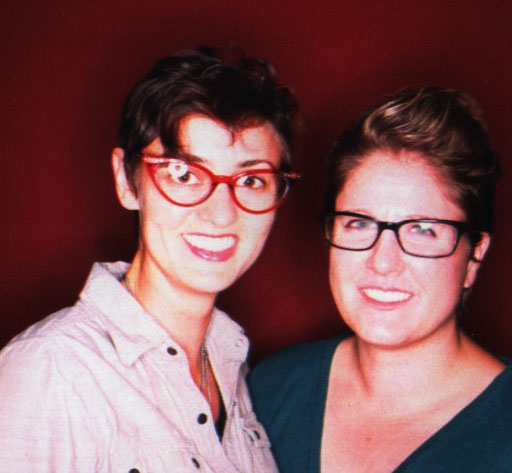 This weekend at the Northwest Pilgrims retreat I had the privilege of hearing a panel on LGBT Mormon issues, including some beautiful and candid remarks from Celeste Carolin of Seattle.

Back in November I linked to Celeste’s moving comments from her talk at the Seattle North Stake’s landmark sacrament meeting in October to intentionally welcome inactive LGBT Mormons back to church. So I was especially pleased to have the opportunity to meet her in person (and in fact got a little teary at her optimism and moral courage).

With her permission I’ve included some of her remarks in this post about being gay, staying active as an “out” Latter-day Saint, and finding the love of her life—at church. — JKR

The culture I was brought up in almost guarded me to some degree from having to deal with intimacy, so it was easy to kind of hide that part of myself. My first year of college, though, I fell in love with my roommate. I told the bishop, who told me just to stay away from her. Finally I fell in love with a woman who loved me back—and I was terrified.

It had to be a secret, and with secrets carry a lot of shame. I had so much shame. I felt I wasn’t really worthy of anything. There was no place to talk about it. At the time, the honor code was ambiguous whether sexual orientation or just homosexual acts were against the school’s policy. At one point I had to go to the dean. Someone had suspected something, and brought their concern to school officials.

But I was about to graduate and could not lose all the credits I had earned, so I lied about it to the dean and said I was not gay.

After college I would still go to church on Sundays but hang out a lot in the halls. I didn’t want to really invest. How could I invest in something that didn’t want me?

Then two and a half years ago I moved to Seattle. I decided I was done lying and hiding. While attending my new local family ward I met with the bishop. I was honest about being gay. His first comment was, “You know this is contrary to the beliefs of the church,” and compared my “affliction” to a drug addiction. He asked me why I wanted to stay active in the church. I said: “I like to sing, and I like to help people move.” There are some beliefs and cultural things that are inherently part of who I am. I am so very, very Mormon. This is my family. And no matter how ridiculous or insensitive your family is, you don’t just walk away.

Before Seattle I had never met another openly gay person in church. I decided that when I went to that new ward, I would tell people that I was gay within the first three things I told them about myself. And if they rejected me, I would become their best friend. People responded really well. Some people were shocked, and other people were like, “Hey, my new gay BFF!”

In doing the stake outreach we found gay Mormons everywhere. Sometimes even on dating websites, where so many people would say, “I grew up Mormon! And I grew up Mormon!” And we’re like, “You should come to church.” In Seattle a significant amount of the inactives are gay, lesbian, transgender, or queer. We believe there is strength in numbers, and people will feel more welcome if they’re not the only gay person there. So if you are gay, come back to church.

There’s usually about 80 people in that Washington Park ward. And that day there were between 200 and 250. Since I was speaking, I was sitting at the front, and looking out was so beautiful, because I could see all these gay couples in church together. Molly Bennion spoke and it was beautiful. She said, “I don’t care if you wear pants to church, hate Relief Society, are LGBT. You belong here. We need you and you need us.” The energy in that room, I don’t even know how to explain how moving it was.

Some bishops are fixers. They see you as a problem that needs to be fixed, instead of just listening. The best question for them to ask is, “That sounds really hard. Can you tell me about it?” Many gay people are in a sensitive, vulnerable place. There isn’t really a way to fix it.

Meeting the love of her life

I met Kathleen at Church. I did it the right way! We’re going to have lots of Mormon babies. We’ve had an awesome experience this past year. But Kathleen and I are thinking of getting married, and policy says that if we do, we can’t be in the Church.

Recently I met with my local leader and talked about my clear desire of staying active in the church if and when I marry. I have been given two possible outcomes. Church disciplinary action or I could voluntarily remove my name from membership of the church.

I will choose neither. I choose to stay. My proposed option is to spend some significant time with my local leader on our knees and follow the will of our creator and not just ambiguous policy.