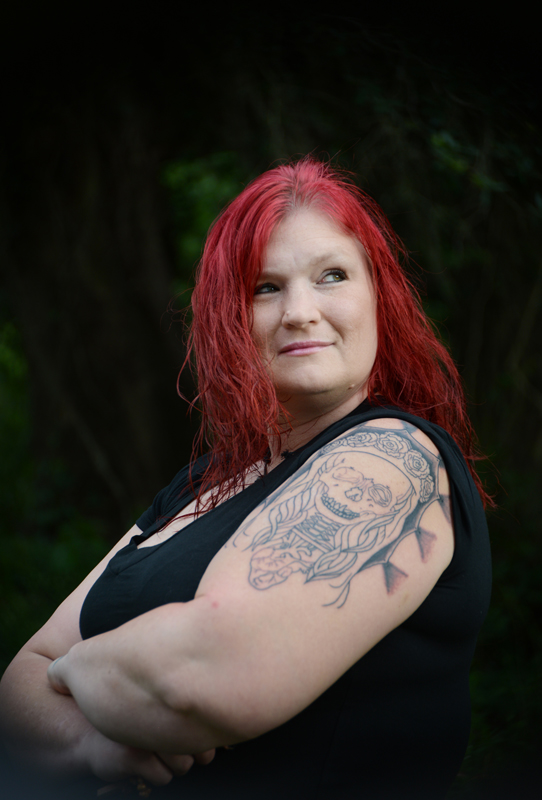 Tammy Bloome says her rosary to Santa Muerte, a skull-faced version of the Grim Reaper in woman’s garb at the heart of a rapidly growing Latin American folk religion. Religion News Service photo by Dede Smith

(RNS) In her Georgia home, Tammy Bloome says her rosary to Santa Muerte, a skull-faced version of the Grim Reaper in woman’s garb.

In Maryland, Sonia Doi gathers with her fellow spiritists — mostly women — to discuss the philosophical vision of reincarnation.

Folk religions such as Santa Muerte and spiritism are thriving around the world, often powered by women as followers — and leaders.

A new Pew Research study projecting the growth of world religions found that in 2010 about 405 million people (roughly 6 percent of the world’s population) identified with folk or traditional religions without formal creeds, sacred texts and institutional structures.

Unlike Christianity, Judaism and Islam, historically all led by men, or the philosophies of the East such as Buddhism where male scholars and monks dominate, folk religions — so close to village or tribe or ancestry — are often practiced and led by women.

Santa Muerte expert Andrew Chesnut, professor of religious studies at Virginia Commonwealth University and author of a book on the Mexican folk religion,  “Devoted to Death,” calls it “the fastest-growing New Religious Movement in the Americas,” with more than 10 million followers.

“Across the board in Latin America, you find disproportionate female participation in all religions, but in the folk religions there is more room, more space for women to exercise positions of authority,” said Chesnut.

Chesnut estimates 90 percent of Santa Muerte devotees live in Mexico and the U.S., and he notes on his website, The Skeleton Saint, that Santa Muerte is moving into Europe, where an academic conference on the folk religion was held last fall in the Netherlands.

Santa Muerte, the signifier of “holy death,” has a bad reputation, however, thanks in part to cameo roles in the hit TV series “Breaking Bad.”

She has been represented as the patroness of drug runners, not, as Chesnut maintains, “the protectress of narco-violence victims.”

When the Los Angeles Times profiled the Santa Muerte temple in LA, it described the folk religion as taking on a more virtuous cast, “like the Virgin for people on the edge.” 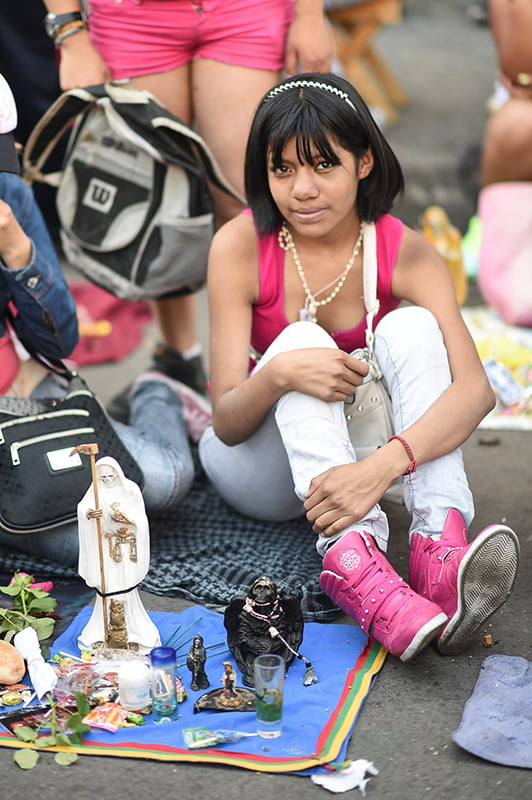 A teenage devotee at a Santa Muerte rosary service in the Tepito section of Mexico City on Aug. 1, 2014. Photo courtesy of Toni Francois

They may be marginalized by poverty, shattered families, undocumented immigration status or sexual orientation. Or they may be turning to Santa Muerte as a love goddess, someone they don’t find in Latin America’s prevalent Catholic culture, said Chesnut.

In 2001, when a Mexican quesadilla vendor put a life-size effigy of Santa Muerte in front of her house in a barrio, people began spontaneously making offerings of flowers and tequila and praying for health, help, even legal protection, said Chesnut. Soon, another Santa Muerte follower, Enriqueta Vargas, began performing baptisms and weddings and displaying the world’s tallest Santa Muerte statue.

Now, said Chesnut, Santa Muerte has become the “multitasking miracle worker of Mexico,” with followers appropriating prayers and practices from the prevalent Catholic Church, even a variation on the rosary, to honor her.

Catholic officials, who call her the satanic face of a blasphemous cult, loudly and frequently condemn the practice. But this hasn’t stemmed the religion’s growth. In the U.S., there are two Santa Muerte temples in Los Angeles, and others are under construction in New Orleans and Houston. The pioneer in New York City is a transgender Mexican, Arely Vazquez, who holds Saturday services and throws a massive fiesta every August.

Tammy Bloome plans to be there this August.

Bloome, 44, a food manager of a truck stop, shares one characteristic with many other Santa Muerte followers: She sees herself as a “disenfranchised Catholic.” 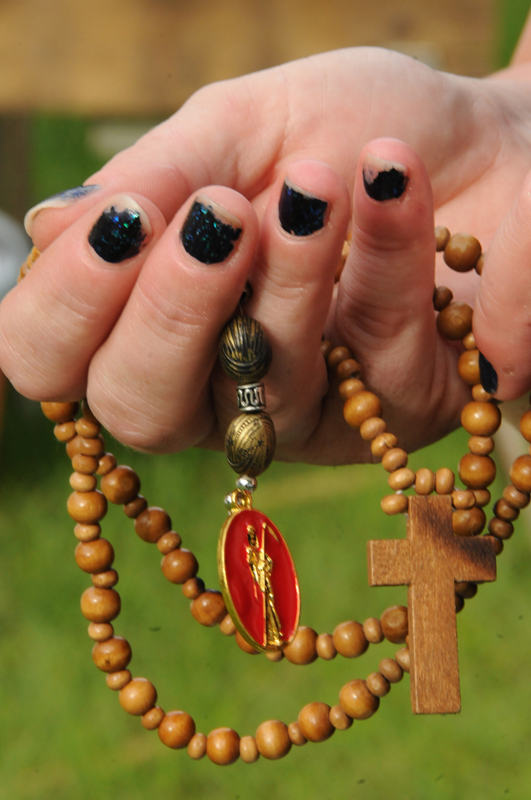 Divorced and remarried outside the Catholic Church, she left it behind when priests refused to baptize her children. When she lived for three years in Guatemala, she discovered Santa Muerte “because she accepts people no matter what they are, who they are — maybe even in spite of who they are.”

“I believe she intervened in my life,” said Bloome. “And I like that our saint is a woman, one who is second only to God.”

When she says a Santa Muerte rosary and lights candles at her home altar, “I believe something responds to the energy put out there.”

In Brazil, another major center of folk religion, Chesnut estimated that 70 percent to 80 percent of the leaders of Afro-Brazilian religions such as Candomble and Umbanda are women. So, too, are many of the educated, white Brazilian followers of spiritism, an import from late 19th-century Europe.

Brazil has 3 percent of the world’s folk religion followers, and census data there finds that 58 percent of the followers are women, said Conrad Hackett, lead demographer and author of the Pew study.

Spiritism was founded by a Frenchman, Allan Kardec, and popularized in Brazil by prolific writer Chico Xavier. It teaches that the path to moral and intellectual perfection is through successive reincarnations, each improving on the one before.

Sonia Doi describes this as a science-based viewpoint that answered all the questions she had as a Catholic child growing up in Brazil and later a religious seeker exploring other faiths.

”Since I was small, I always had the perception that there is something else,” Doi recalled. What she finds in spiritism is a religion based on Jesus’ moral teaching, a philosophy of moral guidance and a scientific explanation of the spirit world that makes sense to her, said Doi, 65, a physician and president of both the U.S. and International Spiritist Medical Associations, which promote knowledge about the connections between body and spirit.

“Our mission is to spread the knowledge that we are spirits. I believe women by nature are more sensitive. That makes the women a little more open and more attracted spirituality in general,” said Doi. 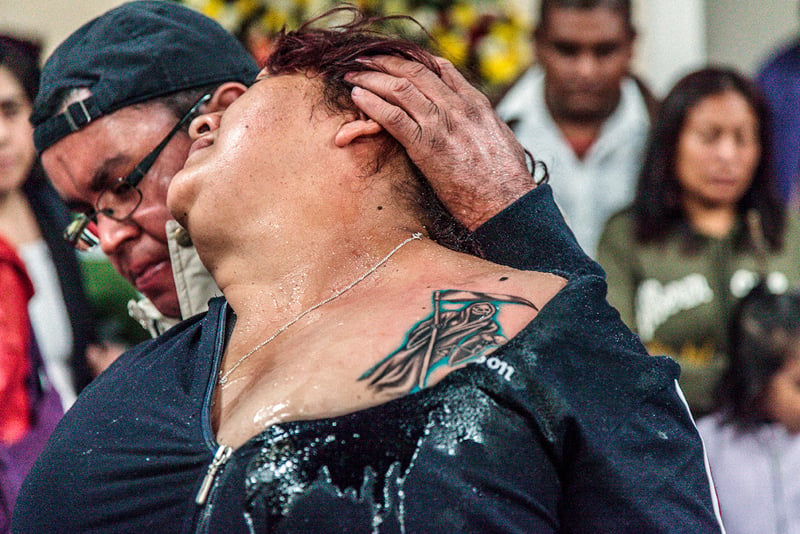 Blessing of fire — a devotee has her tattoo sanctified — at Pachuca in Mexico’s Hidalgo state, 2013. Photo courtesy of Angus Fraser

In China, where the government allows only five official religions, most say they have no faith. But folk religions, which technically are not permitted, have the highest market share of religious identity (21.9 percent), according to the Pew study.

However, sociology professor Fenggang Yang, director of the Center on Religion and Chinese Society at Purdue University, said polls underestimate the true numbers because researchers allowed people to choose only one religion and few would list something practiced in secret.

“If you are born in a village with many gods you belong to that folk religion community,” he said. “You can be both a Christian and a follower of a folk religion.”

As Chinese society becomes “more individualistic and independent,” many women and young people are choosing traditions such as feng shui, with its emphasis on personal harmony with one’s environment, he said.

But living folk traditions with spiritual rites and practices for healing thrive underground in cities and countryside, hidden from official notice.

“Most of these are still village-centered indigenous folk religions where women tend to take the lead,” said Nancy Chen, a professor of medical anthropology at University of California Santa Cruz. “Any time there are rituals of ordination or recognition, the institution becomes intertwined with patriarchal hierarchies.”

Religion Hub
What is the rosary? Why a set of beads and prayers are central to Catholic faith
Follow us on Facebook!
Submit your photos to RNS