“I’m ready to be put this all behind me and to continue reaching for my dreams of filmmaking and in music.”

Those were the recent words of Brandon Milburn, a former youth minister, as he pleaded with a judge for a lenient sentence after being convicted of seven counts of child sexual abuse involving two eleven year old boys.   His pleas were echoed by supporters who came to court to proclaim his innocence. One even remarked, “I do not believe he is a predator. I love Brandon; my children love Brandon. If Brandon was released today, he would be welcome to come and live in my home.”

Fortunately, the prosecutor reminded the judge, “In the sentencing advisory report, the defendant minimizes his activities, his offenses against the boys in this case, and actually denies there are other victims.” Ultimately, the judge decided that Brandon Milburn should spend the next 25 years reaching for his dreams inside the walls of a prison.

Sexual offenders have perfected a grand deception that sadly seems to work all too well inside faith communities. This deception twists truth, minimizes abuse, and exploits guilt in order to create a fictional narrative that paints the offender as the victim and those who accuse and confront as perpetrators of injustice. Unfortunately, too many fail to realize that this deceptive narrative is fiction. 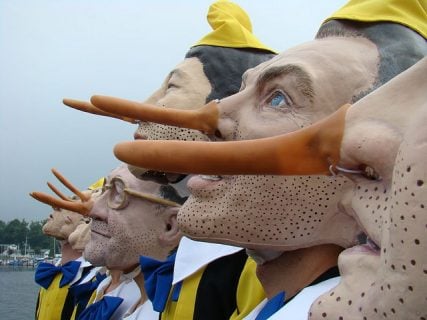 A few months ago, I had a conversation with a couple, who recently learned that their son had been sexually victimized by a popular young man in the church. Upon confronting the offender with this crime, these parents came face to face with this grand deception. Here is how it works:

Step One – “I am a victim.” When confronted about sexually abusing a child, offenders will immediately and tearfully disclose that they too were victimized as a child and never had the opportunity to get help.   In an effort to sound credible, the offender may not necessarily be referring to sexual abuse since the objective is simply to be seen as a victim. Do you see the grand deception at work? Offenders simultaneously take the spotlight off of their own wretched acts while subtly eliciting sympathy from their confronters. Sadly, this initial step of the grand deception can be extremely successful, especially with the broader congregation. Being seen as a victim will often fuel the needed sympathies and doubts of congregations who struggle with accepting a reality that seems all too dark and unbelievable.

Step Two – “It’s not as bad as it sounds.” The next step of the grand deception is to minimize the wrongfulness of the acts committed. If the victim is younger, offenders may acknowledge the behavior as “inappropriate”, but certainly not criminal. Furthermore, they will argue that these “inappropriate” actions were certainly not a result of an evil or lascivious motive, but out of a misguided love and care for the child that may be rationalized using their own childhood abuse. With older victims, offenders will similarly acknowledge the inappropriateness of their behavior, but will make a subtle attempt to paint the victim as a consenting party to the unlawful acts. Statements like, “I never did anything he didn’t want me to do” or “Though I agree I should have acted more responsibly, I never did anything without his [victim] consent.” Do you see the grand deception at work? Sympathetic childhood abuse is the foundation that facilitates the deception that any alleged harmful behavior with the child was unintentional and perhaps even consensual. Sometimes this step concludes with statements such as, “Though I’ve made some mistakes, I’m certainly no child molester.” The stage has now been set to begin turning the tables on the accusers.

Step Three – “You’re being unforgiving.” Those who don’t buy into the deception and who aren’t willing to “move on” from this “minor indiscretion” are labeled as unforgiving, self-righteous, and a lot of other ugly pious words. Oftentimes, offenders don’t even have to carry out this dirty work themselves. By this step in the process, a growing number of deceived sympathizers have stepped forward to use all forms of spiritual guilt in attempt to silence those who aren’t being deceived. Comments such as, “We all make mistakes, why are you being so self-righteous?“ or “God has forgiven, why won’t you?” or “Who is the real one living in sin here?” Do you see the grand deception at work? Confronters become the confronted as offenders successfully create a moral high ground and use it to take that final step in the grand deception.

Step Four – “I am the real victim here.” The pinnacle of the grand deception is achieved when offenders successfully convince others that those who refuse to “forgive and move on” are the actual perpetrators. When offenders are seen as victims, there is sadly no shortage of supporters who step up to advocate on their behalf believing that they are doing the right and “godly” thing.   This distorted and destructive advocacy includes rebuking abuse survivors and those who support them, appearing in court to show support for the “real victim”, and convincing others to do the same. Do you see the grand deception at work? The perpetrator becomes the victim.

This great deception may embolden offenders to speak of chasing after dreams, but it also prolongs the nightmare suffered by too many victims who simply want to wake up to a safer world that isn’t so easily deceived.