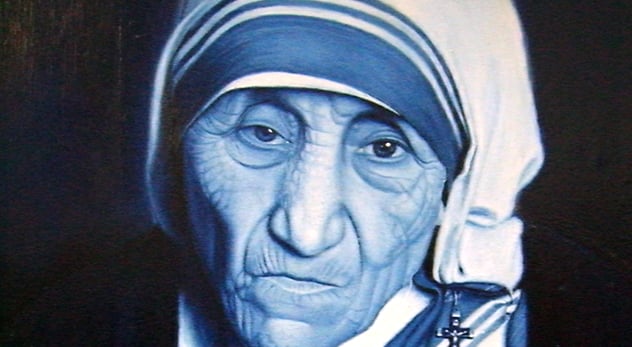 When asked to describe the essence of the Christian message, the late Mother Teresa of Calcutta would often hold up a child’s hand and recite Jesus’ words in Matthew 25:40: “Whatever you did for the least of these brothers and sisters of mine, you did for me.” – Image credit: Gisela Giardino (http://bit.ly/1Q0eOG5)

When asked to describe the essence of the Christian message, Mother Teresa would often hold up a child’s hand and recite Jesus’ words in Matthew 25:40: “Whatever you did for the least of these brothers and sisters of mine, you did for me.” She would then jiggle the child’s fingers one by one and repeat: “You. Did. It. To. Me.”

Mother Teresa saw Jesus in the face of every needy person she ministered to because she understood “the least of these” to refer generally to the poor. And the soon-to-be-saint is not alone; many poverty advocates have successfully invoked it to raise millions and motivate the masses. The gravity of this phrase increases when one considers that Jesus says that divine judgment in the afterlife will be dolled out based upon how one treats the least. With such serious words spoken by the man Christians believe to be the Son of God, no wonder the phrase is one of the most frequently cited in the entire New Testament.

But could Mother Teresa and so many others have gotten it wrong? According to a growing chorus of prominent Bible scholars, Jesus was speaking about persecuted Christians rather than the poor. They claim their interpretation is consistent with the way the phrase is used elsewhere in the Bible and the majority view among Christians throughout history. But not everyone is buying what they’re selling.

“’The least of these’ were missionaries of Jesus—the apostles and others—who had been persecuted and then suffered imprisonment for following and preaching,” says Scot McKnight, professor of New Testament at Northern Baptist Theological Seminary. “Mother Teresa, social justice advocates, and liberation theologians have all colonized this term to their own agenda and made it about anyone poor.”

McKnight first encountered this way of understanding the phrase 30 years ago in a German dissertation while studying for his own PhD. He grounds his thinking in the usage of “least of these” in the New Testament. When you look at the New Testament Gospels where this phrase is used, McKnight wrote in his book Kingdom Conspiracy, it usually refers to followers of Jesus. To support this notion, McKnight notes that in this passage Jesus adds the phrase “brothers and sisters of mine.” (The Greek only says “brothers,” but it is generic.)

“No matter how many times I’ve said this, it seems not everyone cares how the terms are used in the New Testament,” he says. “They have followed Mother Teresa and that’s that.”

McKnight says that in the 21st Century, “the least of these” might be the Egyptian Coptic Christians who were beheaded by ISIS radicals in Libya or Saeed Abedini, the Iranian-American pastor imprisoned by the Iranian government for hosting illegal Christian gatherings.

Understanding Jesus’ words as referring generally to the poor has been a minority view among Christians throughout history, notes Craig Keener, professor of Biblical Studies at Asbury Theological Seminary and author of The Gospel of Matthew: A Socio-Religious Commentary who agrees with McKnight’s view. Three major interpretations of “the least of these” in Matthew 25 have been held by Christians throughout history: any needy person, the Christian poor, or Christian missionaries—a group Keener calls “agents of the Kingdom.” The predominant Christian interpretation has been divided between the latter two options, he says.

McKnight and Keener–an Anabaptist and Methodist, respectively–are not alone in their understanding. Craig Blomberg, a professor at Denver Seminary and expert on Jesus’ parables, says he believes this passage is speaking about Christians. Calvinist theologian D.A. Carson has argued similarly. Even Christianity Today published an article in March 2015 calling this “a more biblically accurate understanding of Jesus’ words in Matthew 25.”

Finding consensus among such a wide swath of Christian scholars is impressive, but not everyone agrees. When Southern Baptist college professor Denny Burk argued this view in a recent blog post last week, it created uproar online and led to an article on the matter by Baptist News Global.

Klyne Snodgrass, author of Stories With Intent: A Comprehensive Guide to the Parables of Jesus, is a major scholar who says Mother Teresa and others have interpreted this passage appropriately. He says that Matthew is clearly referring to the poor because the context of the passage is about obedience, not mission. He says that opposing scholars are both wrong about the phrase’s usage in the New Testament and wrong on how Christians have understood the phrase throughout history.

“When we read [‘the least’] in other places in the Gospels, it is not the exact same expression. As opposed to other places, it is a superlative expression in Greek in this passage in Matthew. So you can’t say it is the same word,” Snodgrass says. “And for that matter, it is not a common enough word or set phrase that is used frequently enough to infer one meaning from its usage.”

When it comes to history, he admits that some historians estimate that more than 50 percent of Christians have not understood this phrase to mean the poor in general, but he adds that you can’t decisively conclude how a historical figure understands the phrase based on the writings we cave. If you take out the uncertain references, Snodgrass says, about 39% refer to Christians and 21% referred to everyone.

“But talking about history misses that Matthew’s focus here is about the needy, poor, mercy, and the love of God,” Snodgrass says. “The real problem here is that people want to avoid accepting that judgment is according to works—a fact that is the consistent teaching of the Bible in both the Old Testament and New Testament.”

Though disagreement over this important Christian text abounds, scholars on all sides concur that the Bible provides ample support for caring for those in need.

“The principle that people who care about poverty want to promote—caring for the needy—is a good one and a biblical one,” says Keener. “But it just isn’t a principle that’s found in this passage.”