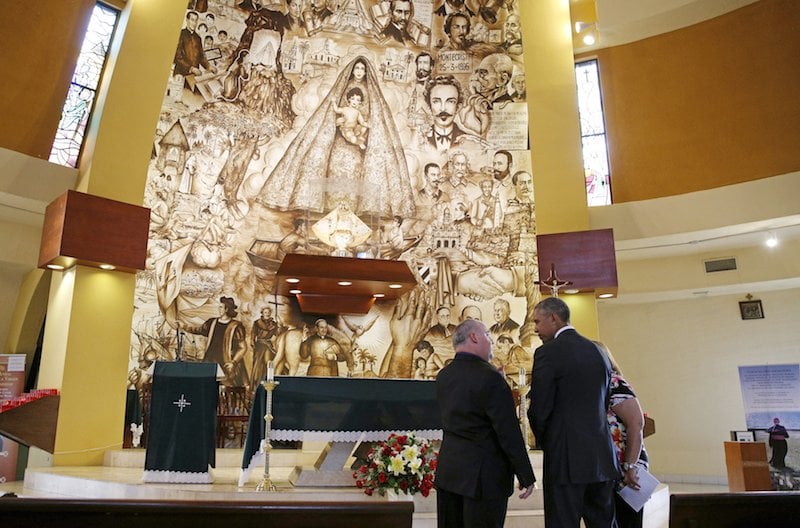 U.S. President Barack Obama visits the Shrine of Our Lady of Charity in Miami, Florida May 28, 2015. Giving Obama the tour is Father Juan Rumin Dominguez (L). Photo by Kevn Lamarque courtesy of Reuters.

MIAMI (Reuters) - President Barack Obama toured a Catholic shrine beloved by Cuban Americans on Thursday, a nod to his pledge to end more than 50 years of hostilities with Cuba and restore diplomatic relations and commercial ties.

The Cuban exile community in south Florida has been split on Obama's move to normalize relations with Cuba - a deal that Pope Francis and other Catholic officials helped broker.

"The president is visiting the Shrine of Our Lady of Charity in Miami to pay his respects to the Cuban-American diaspora that worship there," said Bernadette Meehan, spokeswoman for the White House National Security Council, in a statement.

"He will honor the sacrifices that Cuban-Americans have made in their pursuit of liberty and opportunity, as well as their extraordinary contributions to our country," Meehan said.

The Miami shrine features a replica of a statue of the Virgin Mary known as Our Lady of Charity found floating on the coast of Cuba by fisherman. The original statue is at the shrine of El Cobre near Santiago, Cuba.

Related Posts
By Alejandra Molina
Who is Junipero Serra and why are California protesters toppling statues of this saint?
By David Crary
Amid pandemic, scores of US Catholic schools face closure
By Alejandra Molina
On LA’s Skid Row, Catholic Worker’s ‘Hippie Kitchen’ adjusts to COVID-19
By Bill Baker
A conversation with Father James Martin: 'Why did God let this happen?'
By Thomas Reese
Democrats ignore Catholic voters at their own peril