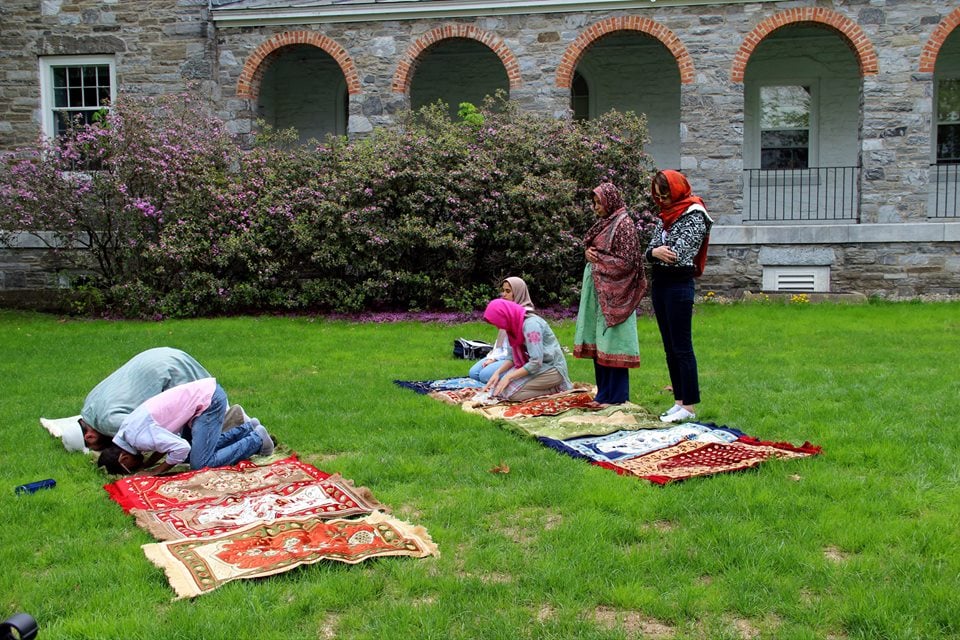 (RNS) Many of the country’s most prestigious universities have hired Muslim chaplains in recent years to offer spiritual support to their Muslim students. Middlebury College, one of America’s oldest liberal arts schools, outmatched them all.

The small rural Vermont school hired Beau Latif Scurich and his wife, Naila Baloch, in the summer of 2014 to share the full-time Muslim chaplaincy position.

The 30-somethings, who were previously chaplains at Tufts and Northeastern universities, are the first married couple to share a full-time Muslim chaplaincy position at a U.S. college.

Baloch is a religion and astrophysics graduate with a master’s in theological studies who grew up in a mixed Sunni-Shia household in Pakistan; Scurich is an American Muslim convert from California with a degree in Islamic studies and Arabic. 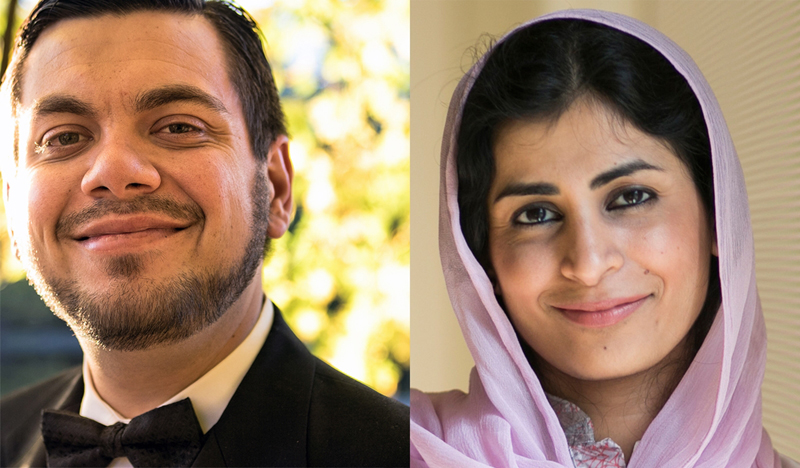 They met in Northern California four years ago at the University of Spiritual Healing and Sufism and were married in 2012.

“As a pair they bring a great mix to the table, because their own journeys represent in particular ways what some of our own students are experiencing,” said Laurie Jordan, chaplain of the college. “Naila was an international student at Williams College so she knows what it is like to come to a small rural school from a far away country and try to navigate something completely different from the large urban setting where she grew up, and where Islam is the cultural norm and background for daily life. Beau on the other hand went to a California high school and is an American convert to Islam — so he is familiar with the kind of backgrounds and experiences of our domestic students who are Muslim.”

Baloch said they don’t share the same views on everything, and they have to make sure one doesn’t overshadow the other. Scurich said they often ran meetings and attended events together this year, but admitted they are working on curbing overwork by dividing their responsibilities and their time more equitably.

Sohaib Nazeer Sultan, co-president of the Association of Campus Muslim Chaplains and Princeton University’s first Muslim life coordinator and chaplain, estimated that there are around 50 Muslim chaplains at U.S. colleges, including around 10 full-time. Many more hold part-time positions — some splitting their time between two institutions — and several are volunteers. (The first Muslim chaplain at any major university in the U.S. was Yahya Hendi, who was hired by Georgetown in 1999.)

Four years ago, a Harvard University Pluralism Project study estimated there were at least 31. 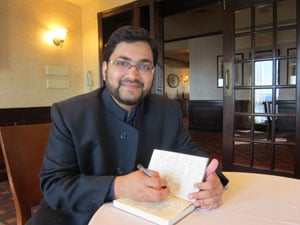 Sultan attributed the rise in the number of chaplains to the growth of the American Muslim population — now about 1 percent of the U.S. public — a greater willingness of Muslim students to organize and advocate for themselves, and a recognition by colleges of the need for interfaith and community understanding of Islam and Muslims.

Scurich, as a convert, and Baloch, as a woman, fit right in. Sultan said there are several Muslim converts now serving as chaplains at U.S. colleges, including at Brown University, Williams College, and DePaul University. He also listed prominent colleges with female Muslim chaplains, including Trinity College, Wellesley College, Tufts University, Northwestern University, and Fairfield University.

Still, according to Baloch, it’s not easy for women to get chaplaincy jobs.

The student community, depending on how conservative it is, may not be looking for a woman to lead them, and colleges might be hesitant to hire a Muslim chaplain who can’t lead a mixed congregation in prayer, Baloch said. (Women don’t generally lead mixed congregation prayers.)

Middlebury’s Muslim student population is estimated to be about 200, in a college of 2,500 — with a core group of 25 regularly involved in Muslim Students Association activities, and much higher numbers attending some of the bigger events. 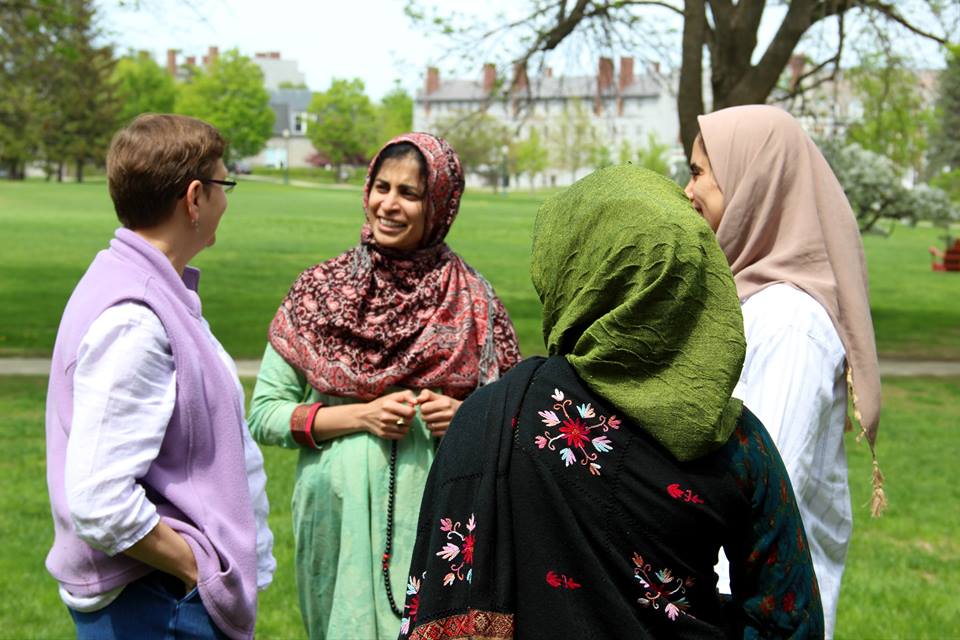 Like many New England colleges, Middlebury had a single Christian chaplain for many decades. Historically many of its early presidents were ordained clergy. Today it enrolls a highly diverse and global student body.

“When I arrived as chaplain of the College in 1996 the Islamic Society of Middlebury College had only a Rubbermaid tote in which it kept a handful of pamphlets and posters,” said Jordan. “They had their Friday prayers in a lounge that was often used for other sorts of meetings, and they were not very happy about that space. Within a few years we acquired for them a dedicated room, carpets for their prayers, a fridge, and a small library of sermons and reference works. …Our Muslim group continued to grow and flourish.”

With a background in trauma response, Scurich had been thinking of a career in hospital chaplaincy before he was hired at Northeastern (his first chaplaincy job), and Baloch chose the path to chaplaincy after working in the government and nonprofit sectors in her native Pakistan. They both knew they wanted to be of service.

Baloch and Scurich have tried to stay focused on their students’ needs, which vary widely, from religious teachings to concerns about Islamophobia.

Baloch doesn’t lead mixed prayers at Middlebury, explaining that those kinds of decisions are partly based on what students want. At Tufts, she trained male students to lead prayers and give sermons, and toward the end of her term helped female students who expressed interest in writing sermons for the male students to deliver.

Baloch said she and her husband want to start encouraging students to participate in giving the sermons and leading the prayers.

She is keen to continue her work with young Muslim women: “I think what’s important for me is that women’s voices be heard, that women have spaces that they can own, that they can really speak authentically their truth and that women can be teachers.”

One of the more difficult times for students this past year, said Scurich, was the Taliban attack on a Peshawar school in December. Two students from the college’s sizable South Asian community had lost family members in the Peshawar attack. The MSA organized a vigil.

The murder of three Muslim students in North Carolina also hit home — a Middlebury student was close to one of the victims. Scurich and Baloch organized conversations about the Islamic State group, the Charlie Hebdo attack, and Islamophobia.

Scurich said he experienced “probably the hardest week I’ve had at work, probably in my life actually” — when he was chaplain at Northeastern — dealing with the Boston Marathon bombing and its aftermath two years ago.

He had helped organize and participate in an interfaith campus vigil shortly after it happened and “held day-after-day one-on-ones” with both Muslim and non-Muslim students; helping them deal with the tragedy of what had happened, and then how to process the anger towards Muslims on campus and off.

Sultan said it’s impossible for a chaplain not to be drawn into world events that have “a layer of religious rhetoric and religious reality.”

“I think to the degree that Muslim chaplains need to remain relevant, they need to be addressing things that come up in the news,” he said.

Besides trying to help support the students’ “spiritual and cultural identity,” Jordan said the people at Middlebury’s Scott Center for Spiritual and Religious Life “see our role as helping students to learn from one another to gain cultural literacy and in particular in our role as spiritual leaders, religious literacy, that will help them navigate the world they will enter upon graduation.”