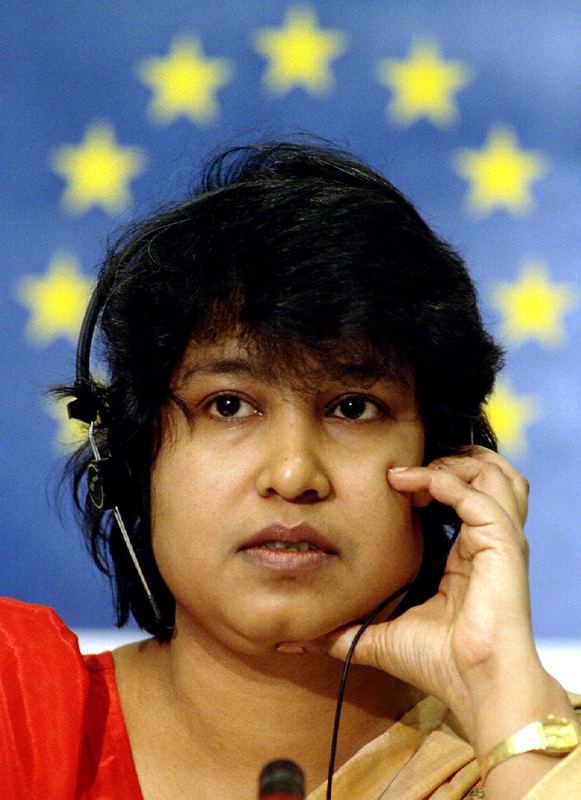 Bangladeshi exiled writer Taslima Nasrin is framed by the stars of the European Union logo during a news conference at the European Parliament in Strasbourg on Dec. 15, 1994. Photo courtesy of Reuters
*Editors: This photo may only be republished with RNS-ATHEIST-RELOCATE, originally transmitted on June 2, 2015.

(RNS) An internationally renowned atheist activist has relocated from India to the U.S. after receiving death threats from an extremist group that has claimed responsibility for at least one of three machete killings of South Asian atheists this year.

Taslima Nasrin, a Bangladeshi gynecologist, novelist and poet, arrived in New York state last Wednesday (May 27). The move was orchestrated by the Center for Inquiry, an organization that promotes secularism and has been working with atheist activists in countries where atheism is unprotected by blasphemy laws.

“Extremist groups have been pretty public that they want Taslima killed,” said Michael de Dora, CFI’s director of public policy and president of the United Nations NGO Committee on Freedom of Religion or Belief. “In the last couple of weeks this has been ramping up and that’s why we were so concerned.”

Nasrin, 52, is well-known among atheists in this country and abroad. She rose to prominence in Bangladesh with the 1993 publication of her first novel, “Shame,” which detailed her country’s Muslim-Hindu tensions and argued against religion. It was banned in Bangladesh and Nasrin became the subject of a fatwa — an Islamic religious ruling — that called for her death for blasphemy. By 1994, she had to secretly leave Bangladesh for neighboring India.

Nasrin has traveled to the U.S. many times for speaking engagements, including the annual conventions of American Atheists and the Freedom From Religion Foundation. CFI obtained a green card for her and will assist her in finding work.

While she has received threats in the past, her situation became more dangerous since the slaying of Avijit Roy, a Bangladesh-American atheist, in Dhaka in February. Roy was a popular and prominent atheist blogger and activist and a friend of Nasrin.

Two other atheist bloggers have been brutally killed in Bangladesh this year — Washiqur Rahman and Ananta Bijoy Das, both associates of Roy and Nasrin. Al-Qaida in the Indian Subcontinent claimed responsibility for Das’ slaying and has sent threatening messages to Nasrin, de Dora said.

“When you see three people in the course of three months murdered and you see those same threats against Taslima, you take those threats seriously,” de Dora said.

Sufia Uddin, an expert on religion in Bangladesh and director of the Islamic Studies program at Connecticut College, is skeptical about the effort to relocate Nasrin. “She knows Bangladesh is not a place where she can be a blogger who condemns in its entirety the religion of Islam, so why is she blogging about it?” she asked. “What is she trying to achieve besides putting a target on her own head? I am not sure I understand that strategy.”

But Uddin notes the political situation in Bangladesh is disintegrating, especially since a secular political party came to power. “There are lots of extrajudicial killings going on and there is a war crimes tribunal whose cases are tainted with incidents that look like the government is interfering with the court system,” she said. “It is a situation that is becoming increasingly polarized.”

Nasrin was met at the U.S. airport last Wednesday by CFI representatives. She is not speaking to Western media yet about the move, de Dora said.

On Monday, CFI launched a $50,000  “Freethought Emergency Fund” to support Nasrin’s needs. Any remaining funds will be used to assist other activists who are threatened. De Dora said CFI is working with approximately half a dozen Bangladeshi atheists whose lives are in danger from al-Qaida and other extremists.