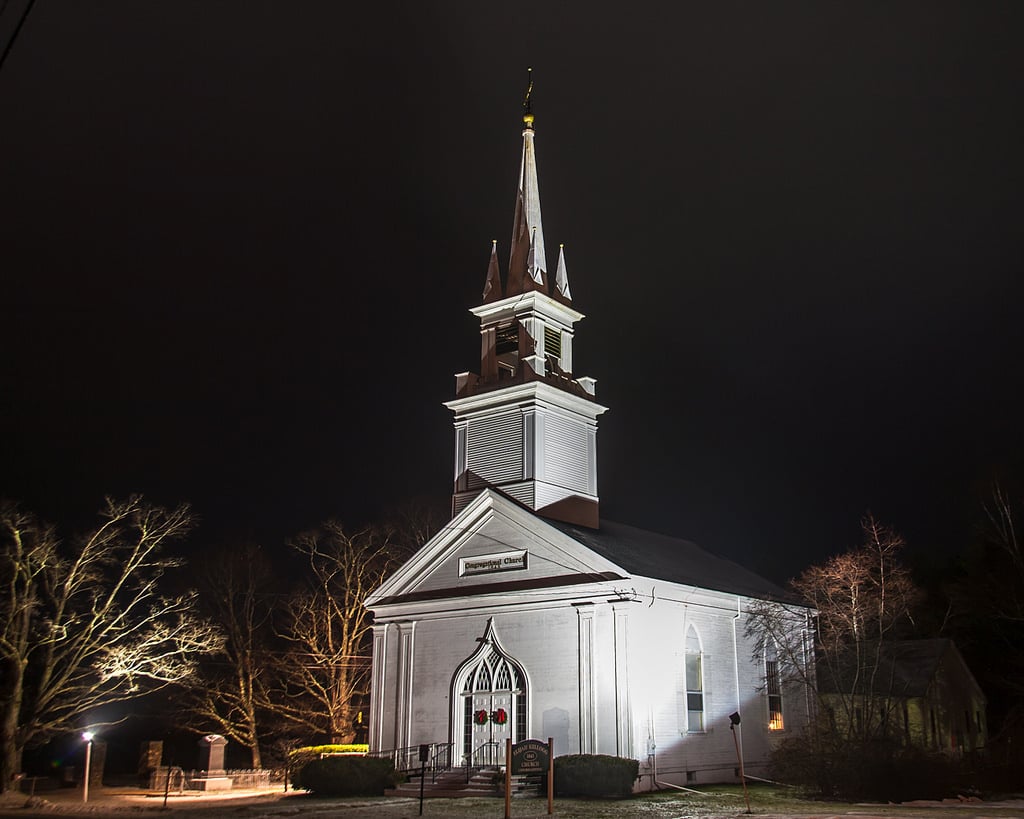 America's mainline churches, once a vibrant part of American religion, have been in a state of decline for decades. At least that's the story that's often told. But it's only half-true. Yes, the Protestant establishment churches have seen a drop in membership. But the churches---as institutions---remain strong with more clergy today than ever before. 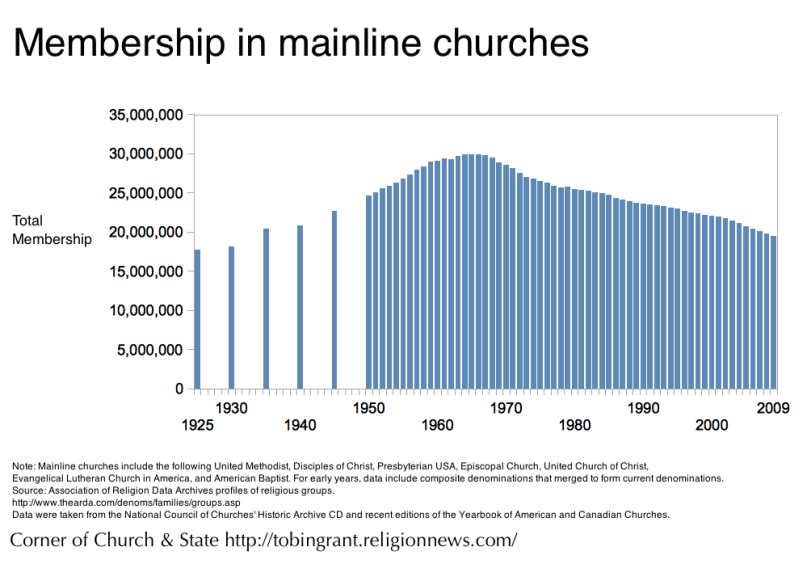 During the first half of the 20th Century, the mainline was on the rise. In raw numbers, these churches nearly doubled in size from from the 1930s to 1960s. After leveling off during the 1960s, membership in mainline churches began to decline. 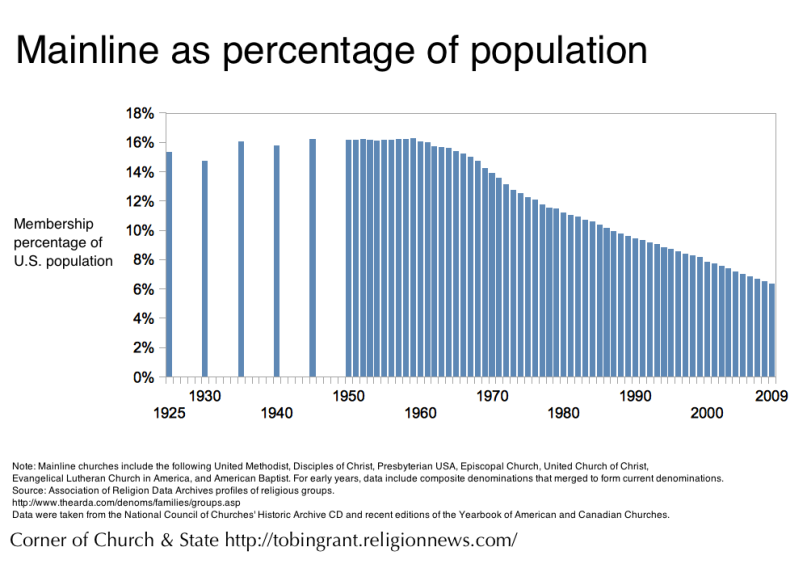 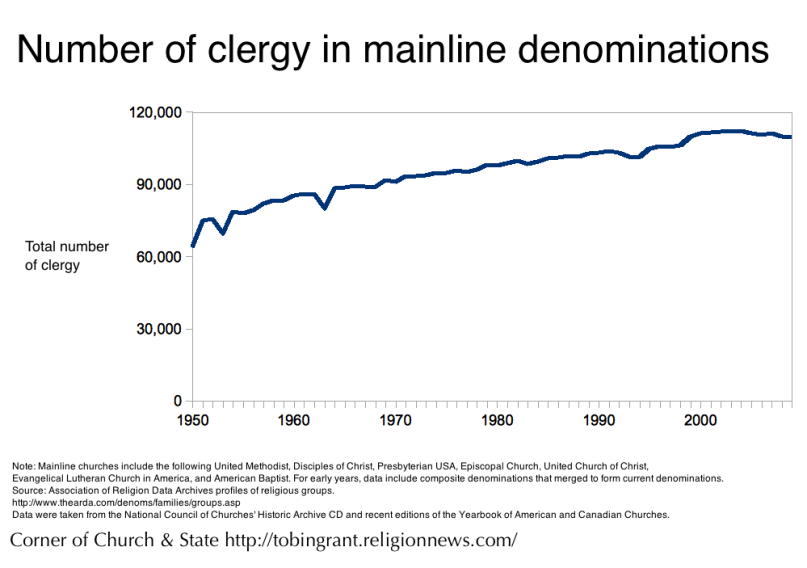 But the drop in membership does not mean that the mainline churches are necessarily in decline. As institutions, as organizations, these churches have grown. We can see this in the number of clergy in mainline denominations. Data for clergy can be tracked consistently since 1950. Over the last half of the 20th Century the number of mainline clergy increased year after year. It has only been over the past decade or so that the number of clergy has leveled off. 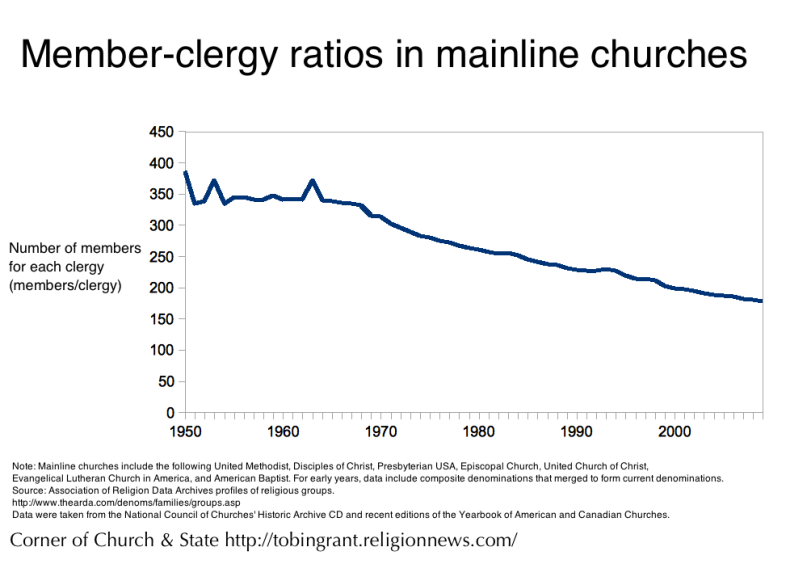 The rising clergy and declining membership means that there are more clergy per member. Before the 1970s, there was one clergy member for around 350 members. This ratio is roughly half that.

Put another way: Mainline churches can employ twice the number of clergy than they could before their so-called decline.

Churches are more than members. In the parlance of economics, they are firms that provide goods and services. The lower number of members does not mean that mainline churches are less able to provide for its members. The decline in members has not resulted in a drying up funding. On the contrary, there are more clergy per member today than during the "rise of the mainline."

We often think of religions as vibrant if they have more members. But quantity isn't always the same as quality. Indeed, in other organizations we often value a low staff-to-client ratio. Schools brag about their low faculty-to-student ratio. Social service agencies complain that they don't have the staff to give people enough attention. The low clergy-to-member ratio in mainline churches likely means that these churches are better able to provide for their members than in years past---more programs for youth and the elderly, more social services, and more local pastors.

There are many metrics to gauge religion. Membership is one. Clergy and organizational capacity is another. Some measures show a decline in the mainline, but others show that the mainline are institutions that may be better able to serve its members (and society) than ever before.

In this post, mainline churches are the denominations that represent the major Protestant groups in the United States. These are the churches of the establishment. In my analysis I look at data on seven denominations:

Some would add additional churches. Some would quibble with the inclusion of all seven. But these seven groups capture the major Protestant groups that have worked together as part of an ecumenical movement in the United States. These churches Many of these denominations are relatively new mergers of other churches; for those churches I used data from the previous churches.

A word on the validity of the data: The membership data for any year may not be accurate because churches vary in their ability to count active members. But for tracking changes over time, this bias is not important. As long as churches over/under report membership every year then we can make comparisons across years. Similarly, the percentage of population calculations are also not perfect. Ideally, we would compare the membership to the adult population, but the overall population. But again, this is less of a problem because I'm less concerned with an accurate figure for one year than with a valid comparison across years. For example, 15 percent may be an underestimate for 1930, but that's okay if we're trying to compare it another year that is equally underestimated.