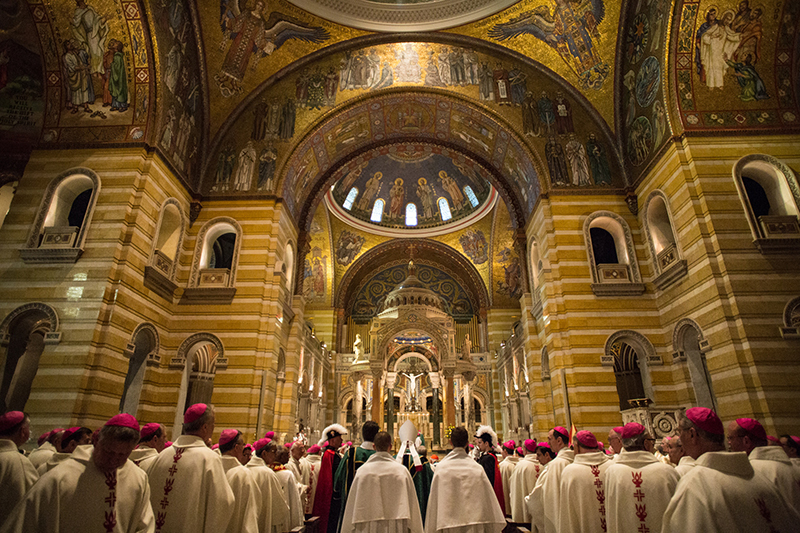 Bishops gather for Mass on June 10, 2015 at Cathedral Basilica of St. Louis during the spring general assembly of the U.S. Conference of Catholic Bishops. Photo by Lisa Johnston, St. Louis Review, courtesy of Catholic News Service

The president of the U.S. Conference of Catholic Bishops kicked off a gathering in St. Louis of approximately 250 of the nation’s bishops by referring to Ferguson.

“We mourn those tragic events in which African-Americans and others have lost their lives in altercations with law enforcement,” said a statement prepared by Archbishop Joseph E. Kurtz of Louisville, Ky., which was read by Bishop Ronny Jenkins, general secretary of the U.S. Conference of Catholic Bishops on Wednesday (June 10).

“Racism is an evil which endures in our society and in our church.”

The statement said that efforts “must address root causes of these conflicts. A violent, sorrowful history of racial injustice, accompanied by a lack of educational, employment and housing opportunities.”

And it quoted Pope Paul VI: “If you want peace, work for justice.”

Kurtz then laid out ways Roman Catholics could help end racism, among them: prayer, using scripture and Catholic social teaching to gain a deeper understanding of the dignity of all persons, interacting with those from various racial backgrounds, and getting to know law enforcement officials.

The members of the U.S. Conference of Catholic Bishops were in St. Louis for their annual spring assembly. They gathered Wednesday at the Hyatt Regency at the Arch to discuss topics important to Catholics.

Francesco Cesareo of the National Review Board, a committee established in 2002 to help prevent the sexual abuse of minors, warned against complacency. Cesareo noted that although the church had made much progress, six allegations of sexual abuse in 2014 had been substantiated.

Bishops at the conference also announced a new, free Catholic mobile app that will offer news about Pope Francis, Mass schedules and parish locations, among other features. The app is expected to launch in July.

“This jailing of asylum seekers is a violation of international law,” Seitz said.

Meanwhile, Bishop Eusebio L. Elizondo of Seattle said the church was advocating that the U.S. resettle 65,000 of the most vulnerable Syrians, including persecuted Christians.

One of the day’s last presentations was made by Archbishop Salvatore J. Cordileone of San Francisco, who spoke about the upcoming U.S. Supreme Court decision on same-sex marriage. Cordileone’s request that Catholic school officials sign a statement that affirmed they believe homosexual relations are “gravely evil” prompted protests back home.

At the conference, Cordileone said he feared that “those who continue to advocate for the true definition of marriage will be increasingly marginalized.”

(Lilly Fowler is the religion reporter at The St. Louis Post-Dispatch.  She can be reached on Twitter @LillyAFowler.)