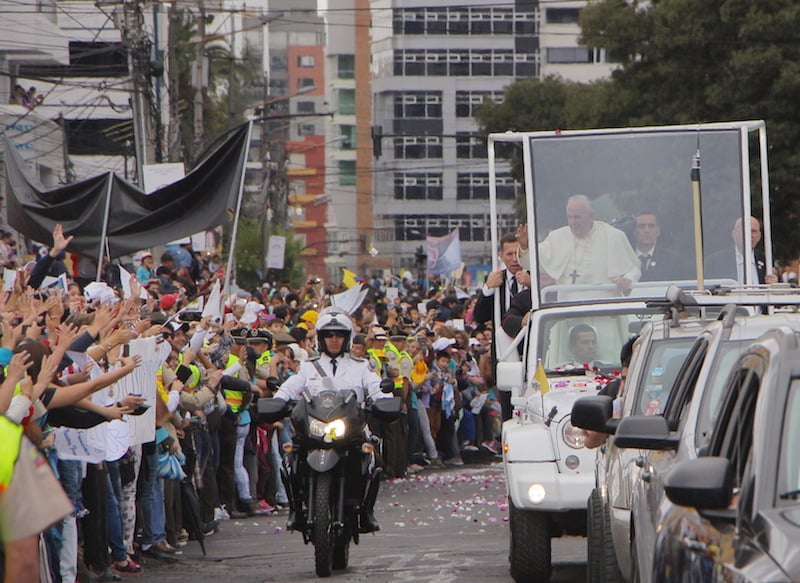 Pope Francis greets a crowd from the Popemobile in Quito, Ecuador, July 5, 2015. Pope Francis landed in Ecuador's capital Quito on Sunday to begin an eight-day tour of South America that will also include visits to Bolivia and Paraguay. Photo courtesy of REUTERS/Gary Granja
July 5, 2015
Reuters

Pope Francis greets a crowd from the Popemobile in Quito, Ecuador, July 5, 2015. Pope Francis landed in Ecuador's capital Quito on Sunday to begin an eight-day tour of South America that will also include visits to Bolivia and Paraguay. REUTERS/Gary Granja

QUITO (Reuters) Laughing as his cap flew off in the Andean highland wind, Pope Francis flew into Ecuador on Sunday (July 5) to start a "homecoming" tour of South America, where he will champion the rights of the poor and the planet.

His visit to Ecuador, Bolivia and Paraguay -- three of the region's poorest and smallest countries -- is Francis' first abroad since his landmark encyclical urging an end to man's degradation of the global environment.

"I thank God for having allowed me to return to Latin America and to be here with you today in this beautiful land of Ecuador," the Argentine-born pontiff said in a speech on the runway after his 13-hour flight from Rome.

When he emerged from the plane, a breeze whipped off his white zucchetto cap and swirled his robes, but the affable 78-year-old took it in his stride, smiling and laughing as he walked down steps to an embrace from President Rafael Correa.

He was then greeted by a group of people dressed in indigenous clothing, including a white blouse with sharp red and orange colors and a large red skirt. One, 16-year-old Elizabeth Maldonado, said afterward that she had never dreamed she would hug the pope.

"It was something so beautiful, marvellous, a positive energy, a huge blessing for us," she said.

Tens of thousands lined the streets as Francis' motorcade drove into Quito, some pushing through a police line. Well-wishers threw gifts at the popemobile, including two live white doves.

Francis stopped briefly to kiss the head of an elderly lady and a man who carried a baby in his arms.

The pope visited Brazil for a youth festival in 2013 but that was to substitute for predecessor Benedict after his sudden resignation. Because he chose the three nations himself, Vatican aides say this is the real "homecoming" to his native continent.

His first host, Ecuador, has for weeks been hit by anti-government demonstrations, with thousands on the streets to protest against tax changes and alleged state authoritarianism.

Protest leaders have called a moratorium during the pope's visit out of respect for him, and in his arrival speech Francis stressed the need for dialogue and respecting differences.

Celebrated by supporters as a champion of the poor but cast by critics as an autocrat, leftist leader Correa was elected in 2006 vowing to spread wealth more fairly and protect the country's natural riches.

"Ecuador is the eco-center of the world," Correa said in a welcome speech, noting the extraordinary biodiversity of his nation, which is thought to be home to more than one million species, or more than one-tenth of the world's total.

Quito, a highland capital mixing colonial cobbled streets with modern high-rises, was plastered with posters and billboards welcoming Francis. A million extra people are expected in Quito and the coastal city of Guayaquil for Masses.

"He's a person who transmits love and peace for all humanity," said Andrea Ramirez, 25, a nun who took an eight-hour bus from Loja in the country's south to Quito last night.

"He'll teach Ecuadoreans that Christ lives and is present here, despite all the conflicts and social problems. He'll bring peace and love to Ecuador," she added, outside a huge neo-gothic basilica overlooking Quito.

Boasting some of the world's most extraordinary habitats - from the Amazon jungle to the Galapagos islands, yet heavily reliant on oil and mining, Ecuador in many ways illustrates the issues at the heart of Francis' recent exhortations on the environment.

In his encyclical, the pope demanded swift action to save the planet from ruin and urged leaders to hear "the cry of the earth and the cry of the poor," whom he said were most affected by climate change.

"Protect what is small and simple"

"From the peak of Chimborazo (volcano) to the Pacific coast, from the Amazon rainforest to the Galapagos Islands, may you never lose the ability to thank God for what he has done and is doing for you," he said.

"May you never lose the ability to protect what is small and simple, to care for your children and your elderly, to have confidence in the young, and to be constantly struck by the nobility of your people and the singular beauty of your country."

On Monday (July 6), Francis will fly south to the coastal city of Guayaquil to deliver a Mass before heading back to Quito to meet with Correa. On Tuesday he is to deliver a Mass at Quito's Bicentenario Park, where some were already camped out to see him.

On Wednesday, Francis moves on to Bolivia, where he is expected to defend the rights of indigenous people. In Bolivia, he will also visit the notoriously violent Palmasola prison.

Landlocked Paraguay, the last stop, is notorious for contraband smuggling and illicit financing. Francis will meet several groups of social activists while he is there.

While all three countries are between 82 percent and 93 percent Catholic, the church in other parts of Latin America is losing followers to Protestant evangelical groups.

Identification with Catholicism is declining throughout the region, according to a recent study by the Pew Research Center.

The pope, however, has felt more comfortable holding dialogues with these groups than his two immediate predecessors did. He had good relations with Protestant evangelical groups when he was archbishop of Buenos Aires.