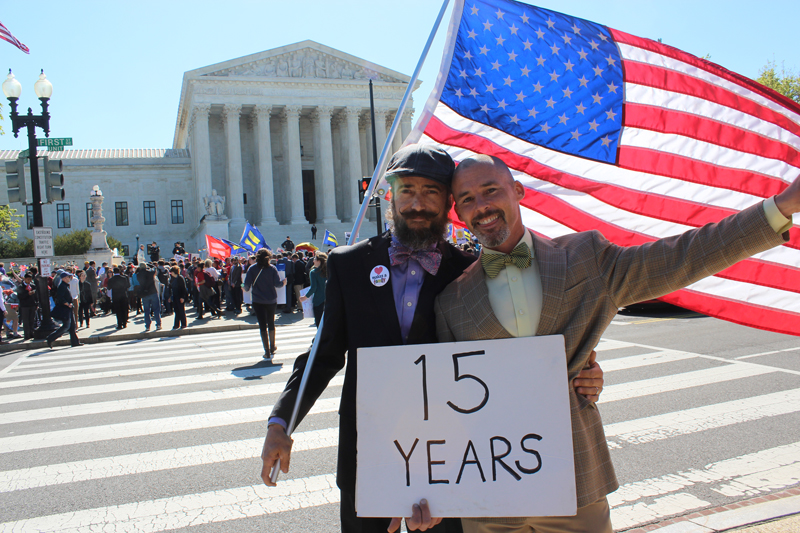 Joe Capley-Alfano, left, and Frank Capley-Alfano of Oakland, Calif., stand in front of the Supreme Court on April 28, 2015 as justices heard arguments about same-sex marriage. The couple have been together for 15 years and married in 2008 before Proposition 8 halted gay marriage in California until 2013. Religion News Service photo by Adelle M. Banks
July 8, 2015
David P. Gushee

Joe Capley-Alfano, left, and Frank Capley-Alfano of Oakland, Calif., stand in front of the Supreme Court on April 28, 2015, as justices heard arguments about same-sex marriage. The couple have been together for 15 years and married in 2008 before Proposition 8 halted gay marriage in California until 2013. Religion News Service photo by Adelle M. Banks

(RNS) Despite threats from some conservative Christian dissenters, civil disobedience may turn out to be an irrelevant response to gay marriage.

To understand why, we have to think seriously about what civil disobedience really is.

Could this apply to the new legalization of gay marriage nationwide?

The federal government has not mandated that houses of worship or clergy perform gay marriages. Nor has it forbidden congregations or clergy from performing such nuptials. Government has permitted gay marriages -- and thus the solemnization of these marriages by whoever is authorized to offer it.

If the government were one day to mandate that congregations or clergy perform gay marriages, this would be grounds for civil disobedience -- and a violation of religious liberty. But that is hardly a realistic possibility.

But what about government officials who are now required to register or perform civil gay marriages, in violation of their consciences?

In my view, regardless of whether state officials like a particular law, they are required to submit to it in the performance of their duties -- or should resign from office.

Government clerks are not religious officials. Nor are they simply individual citizens who might find a government’s law to be a violation of conscience. They are on the state payroll. Refusal to adhere to or enforce the law on the part of a government official is dereliction of duty, not civil disobedience.

After the court’s Roe v. Wade ruling, some anti-abortion Christians argued that civil disobedience is permissible or even obligatory where government merely permits what God forbids, such as abortion. Thus some Christians chained themselves to abortion clinic doors and otherwise participated in civil disobedience not because they were mandated to perform abortions, but because others were permitted to do so.

This view was not shared by a large number of Americans and was never accepted by government officials. Eventually the movement ran out of steam, partly because it was so strident.

Few would consider government permission of gay marriage to reach that level of moral seriousness. Public sympathy is far more likely to favor the LGBT community than those who object to gay marriage.

Take a much more legitimate fear on the part of today’s dissenters -- that government will mandate changes in the policies of religious congregations, social-service or educational organizations. The most obvious places where this could happen would be related to admissions, hiring or other policies that discriminate for religious-ethical reasons against married, sexually active or “out” LGBT people.

Or it might ban federal funds, such as government social-service contracts, research grants or student loans, from going to such organizations. This is not the same thing as simply banning such organizations from adhering to their preferred policies, but for many organizations it remains a nightmare scenario.

There would be no form of civil disobedience available in such cases. The real fight would be within the legal and political system, and it is in fact already happening.

But no organizational leader will be arrested or imprisoned if these organizations stick to their policies, and if government withdraws financial assistance (by no means a certainty).

No organization will be raided and padlocked. No civil disobedience strategy will be relevant.

Instead, such organizations essentially will be shut out from using government dollars, with predictably scary effects on their bottom lines and reputations.

If these policies are sufficiently important to these organizations, they may well want to prepare for the day when they will have to function without continued access to tax-exempt status or government dollars. 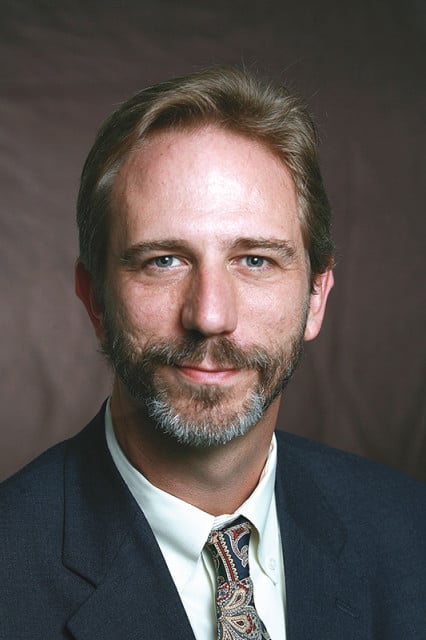 Of course, they do have other options. They could change the relevant policies, perhaps under protest, while claiming no change in their values. They could do this because they decide that their organizational mission is too important to let it wither because of its LGBT policies.

Or, of course, they could take this as an opportunity to dig deeper and actually reconsider their beliefs about LGBT people and their relationships, as some of us have already done.

In short, for dissenters on gay marriage, civil disobedience is not going to be a useful tactic. A different kind of struggle is in the offing. It will be conducted in public opinion, in government advocacy, in the courts -- and maybe in the hearts and minds of fellow Americans.

Related Posts
By Thomas Reese
Religious conservatives have lost LGBTQ rights battle. It’s time to surrender.
By Adelle M. Banks
Clergy, scientists grapple with thoughts of worship without congregational singing
By Jack Jenkins
How a rally for the right in Charlottesville emboldened a resurgent Religious Left
By Shane Claiborne
How the war on Christmas became the war on Easter
By Adelle M. Banks
Fear remains a barrier for minority participation in US census, say faith leaders