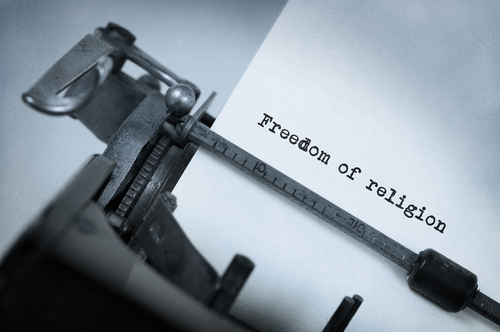 This week BYU has been hosting a conference on religious freedom, and according to the Deseret News, the main item on the agenda has been the June 26 Supreme Court decision in favor of legalizing same-sex marriage. (One speaker yesterday identified "at least twelve religious freedom grenades" with which the court has now attacked Americans' liberties. Inflammatory rhetoric, anyone?)

A key issue at hand has been that of “public accommodations.” In other words, now that same-sex marriage is legal in all fifty states, what about daily life? Will private businesses and restaurants have a right to refuse service to LGBT people?

According to the Civil Rights Act (1964) and the Americans with Disabilities Act (1990), retail stores, universities, recreational facilities and the like now have to serve all customers regardless of race or physical disability; will something like those laws be extended to LGBT Americans?

The LDS Church has lobbied hard for the right of conservative religious persons – like, say, those who are members of the LDS Church! – to refuse such accommodations in the name of “religious freedom,” even while it has also lobbied for LGBT persons to enjoy equal housing and employment rights under Utah state law.

I am not a legal expert, and I’m sure the public accommodation issues are complicated. But I would love for Mormons to think more carefully about what we mean by “religious freedom,” and why we have defaulted to that language.

And we have defaulted to it. So far in this decade, “religious freedom” has come up more than four times as often in General Conference as it did in the entire preceding decade.

What does “religious freedom” actually mean? Here is the definition according to the U.S. State Department:

This definition points to “fairness for all,” as the name of BYU’s conference on religious freedom implies. Fairness for all should be our goal.

But the much narrower, fear-based definition of “religious freedom” that I keep seeing from LDS leaders and members alike -- like the grenade-happy speaker quoted above -- sounds more like “upholding the privilege of religious conservatives to oppose homosexuality wherever possible.”

Throwing around language about religious freedom means Mormons had better be prepared to cast a much, much wider net than protecting one minority religion (which, surprise, is ours!) on one issue in one nation.

I hope we are starting to do this. I was pleased to see, for example, that the BYU conference description mentioned a hypothetical scenario involving Islam: “For example, says Smith, an employee who is Muslim or Christian and wants to ask for time to pray during work or not to work on Sundays, can come to this conference and learn how and when to ask for those accommodations.”

But the quoted example is of a Muslim requesting permission to do something that a Mormon might also do – taking time off work for religious reasons. That could just as easily be us.

We’re not showing a commitment to religious freedom with examples like these; we’re reinforcing the rights of others when they also happen to be rights we desire for ourselves.

Where the rubber meets the road with religious freedom is when we are prepared to argue for other people’s religious practices when they’re not ones we necessarily agree with. And this is what I don’t see the LDS Church doing.

I hope that when Mormons advocate for “religious freedom,” we’re not just using that as a code phrase for protecting our own small, relatively unpopular religion.

Time will tell how willing we are to think about, and champion, the religious freedom of groups that are far smaller and more disparaged than our own.