The fest aims to challenge misperceptions about Muslims and combat hate. It features 15 Muslim comedians — from Dubai native Ali Al Sayed to “America’s Funniest Muslim” Azhar Usman — and there are more than a few familiar names on the marquee.

Co-organizers/comedians Dean Obeidallah and Maysoon Zayid are hoping it will be an annual event, and they may take the show on the road. Their successful annual New York Arab-American Comedy Festival, which features comedians from a range of faiths, enters its 12th year this fall.

READ: ‘Halal in the Family’ bashes Muslim stereotypes with laughs

Zayid is an actress, comedian, disability advocate and writer who has performed in top New York clubs. She’s been a headliner on the “Arabs Gone Wild” comedy tour and “The Muslims Are Coming! Tour.” She is the founder of Maysoon’s Kids, a scholarship and wellness program for disabled refugee children.

Religion News Service interviewed the two by email about the festival and about Muslim comedy in general. Q: Why launch an all-Muslim comedy festival? And why in New York?

Zayid: Dean and I decided to do the Muslim Funny Fest because we wanted to combat the hate toward Muslims that is prevalent in mainstream media by using comedy to challenge misperceptions about our very diverse community. The festival is held in New York City because New York City is the center of the universe, and because I live in New Jersey.

Q: What’s so funny about Muslims?

Obeidallah: I have no idea — it’s like asking what is so funny about human beings. Some are funny, some are not. In the festival we have all professional-level comedians so I can assure you they are funny. But we are just as funny and unfunny as every other religious group.

Q: How many professional Muslim comics are there in the U.S., and how varied are they religiously?

Zayid: I was amazed by the number of submissions to the festival we received. The group of comedians who made the cut and are in Muslim Funny Fest are extremely diverse. We have comedians of different races, cultures and devoutness. Some of the comedians practice full-time Islam, and some are Muslim only in name. It was important for us to show that Muslims are not a monolith and that we are funny.

Q: Have you gotten any pushback from American Muslims or others who don’t like your kind of comedy? What topics are off-limits? What is fair game?

Obeidallah: We have not received any pushback from the Muslim American community.  We have received questions about will there be sex jokes or cursing, etc., but that comes with any show. There are zero topics off-limits — comedians can and hopefully will make jokes about a wide range of topics.

Zayid: This is comedy. No topics are off-limits. All is fair. The Muslim community in America and worldwide has been incredibly supportive of the work we are doing. I’ve received no pushback from our community, but I have received threats from right-wing conservative trolls. I’ve also received support from the right wing who are not trolls.

Q: There have been several initiatives by Muslim comics over the last decade — including Aasif Mandvi’s “Halal in the Family,” “The Muslims are Coming!” film and tour, “Allah Made Me Funny World Domination Tour” and the “Axis of Evil Comedy Tour.” What kind of impact have Muslim comics had on how Americans perceive Muslims?

Obeidallah: The impact of Muslim comedians or Muslims in the entertainment world is vital for creating a counternarrative about who we are. I can’t measure the impact on any type of metric, but I can say that I have received many emails or comments on social media (from people) who said that our comedy projects have had a positive impact on the way they viewed Muslims.

Q: What kinds of inroads have American Muslims made in the entertainment industry?

Obeidallah: Very little, to be honest. But the good news is that there are more Muslims than ever before in the Hollywood pipeline, so to speak. And in the near future, expect to see even more Muslims starring in and creating entertainment projects.

Zayid: We’re not doing so badly in comedy, that’s for sure. You have people like Dave Chappelle and Aasif Mandvi, so we are definitely in the mix.

Q: What would you say to people who are on the fence about coming to Muslim Funny Fest?

Obeidallah: If you enjoy comedy that will make you laugh and also at times challenge misconceptions about Muslims, then come on out. The comedians are all professional-level and the shows are funny for everyone, not just Muslims.

Zayid: Just come out, and give it a chance. It’s not going to kill you. 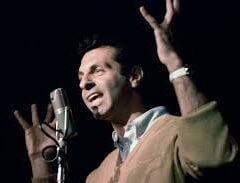 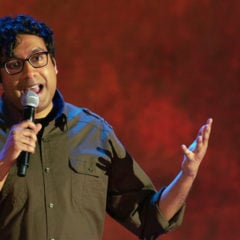 General story
Comedian Hari Kondabolu on punching up and kicking down

General story
Comedian Hari Kondabolu on punching up and kicking down
Follow us on Facebook!
Submit your photos to RNS