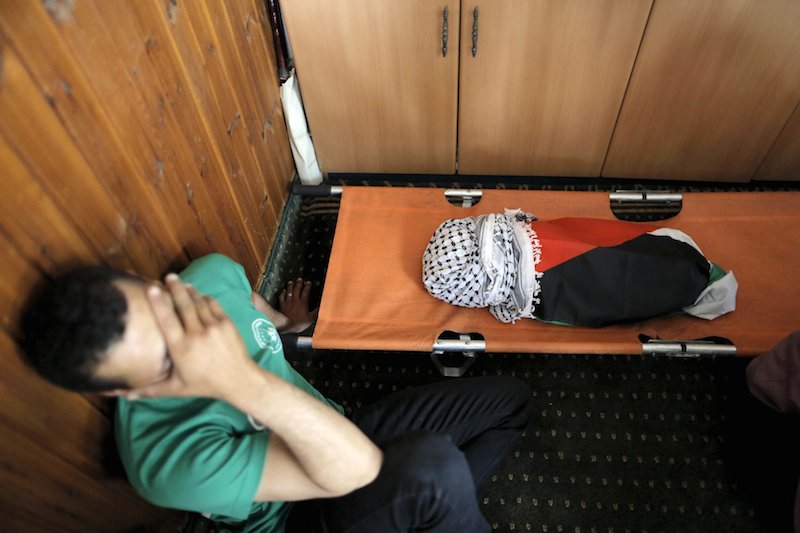 A mourner reacts next to the body of 18-month-old Palestinian baby Ali Dawabsheh, who was killed after his family’s house was set to fire in a suspected attack by Jewish extremists in Duma village near the West Bank city of Nablus July 31, 2015. Photo by Ammar Awad courtesy of Reuters

The house in Duma, a village near the city of Nablus, had its windows smashed and fire bombs thrown inside shortly before dawn as the family slept, the military and witnesses said. Graffiti in Hebrew reading “revenge” was scrawled outside, below a Star of David.

The child’s parents and four-year-old brother were flown by helicopter to an Israeli hospital where they were said to be in serious condition, officials said. A second house in the village was also set ablaze, but no one was at home.

It was the worst attack by Israeli assailants since a Palestinian teenager was burned to death in Jerusalem a year ago. That followed the kidnapping and killing of three Israeli teenagers by Palestinian militants in the West Bank.

The Israeli military boosted forces in the area to search for the suspects, described by a spokesman as “two masked terrorists”, and prevent any escalation in violence. The Palestinian Islamist group Hamas called for revenge.

Ibrahim Dawabsheh, a Duma resident, said he heard people shouting for help from the house and rushed to it. “I saw two masked men outside,” he told Reuters. He went to get help and when he returned they had gone.

Several hundred people marched at his funeral procession calling for retribution. “With our souls and blood we shall redeem you, martyr,” they chanted as the child’s small flag-draped body was carried through the village for burial.

Israeli Prime Minister Benjamin Netanyahu said he was shocked and promised that “all means” would be used to bring the assailants to justice. “This is a terrorist attack. Israel takes firm action against terrorism, no matter who its perpetrators are,” he said.

Part of Netanyahu’s right-wing coalition is the ultranationalist Jewish Home party, which advocates more settlements and settler rights in the West Bank. Jewish Home leader Naftali Bennett was quick to denounce the attack, but Palestinians accused the party of laying the ground for it.

The police said a special task-force was investigating the killing, along with the Shin Bet security service.

Palestinian President Mahmoud Abbas said he would submit the attack as evidence to the International Criminal Court. “It is a war crime, a humanitarian crime,” he told reporters.

Earlier a spokesman for Abbas held Israel responsible. “Such a crime would not have occurred if the Israeli government did not insist on pursuing settlements and protecting settlers,” Nabil Abu Rdainah said.

Hamas spokesman Hussam Badran called for retaliation. “This crime has made occupation soldiers and settlers everywhere legitimate targets,” he said.

Fearing the killing would provoke violence in Jerusalem, police restricted entrance to al-Aqsa mosque for Friday prayers to men over the age of 50 and to women.

Some stone-throwing erupted outside the Old City, police said, with one officer lightly injured. In the West Bank city of Hebron, stone-throwing clashes between hundreds of Hamas supporters and Israeli soldiers broke out after prayers.

Israeli Police spokeswoman Luba Samri said the torching appeared to have been a “Price Tag” attack, a reference to militant settlers who exact retribution for any Israeli government curbs on settlement expansion in the West Bank.

Israel tore down two illegal structures in the Beit El settlement near Ramallah and removed dozens of people from another settlement near Nablus on Wednesday, prompting protests.

The “Price Tag” group has been blamed for torching a number of mosques in the West Bank in recent years. Those attacks caused widespread damage but no casualties.

Though Israel has promised to crack down on such assailants only a handful of indictments have been handed down.

The Palestinians seek a state in the West Bank, East Jerusalem and the Gaza Strip. In the West Bank, they have limited self rule but nearly 60 percent of the territory remains under the full control of the Israeli military.

Israeli settlements are considered illegal under international law. The last round of U.S.-brokered peace talks between Israel and the Palestinians broke down in 2014.