(RNS) Last year, a flood of faith films starring white actors led many to charge that Hollywood was standing in the way of racial progress. But religious audiences can witness a stark departure from this troubling trend when “War Room” hits theaters on Aug. 28.

The fifth feature film produced by successful Christian moviemakers Alex and Stephen Kendrick tells a story about the power of prayer. It does so with an almost entirely African-American cast, including New York Times best-selling Christian author Priscilla Shirer, in her movie debut.

“There is an element to the way we tell this story that has power and desperation that would be different if we tried to tell it any other way,” Alex Kendrick said of his decision to opt for a black cast. He says when executives from their distributor (Sony’s Affirm Films) viewed it for the first time, they responded, “If this had been told with a different race, it would be a different movie.”

“War Room” arrives at a time when racial tensions in America have intensified as a result of police brutality cases and the racially motivated slaying of black worshippers by a white shooter in Charleston, S.C. Those involved with the film say they don’t believe the timing of its release is a coincidence, and they think that the message of “War Room” might have the power to usher in reconciliation in America.

Actor T.C. Stallings says he accepted the male lead role in the film because of the positive picture it paints of the African-American family. Stallings grew up in a “stereotypical stigma of a black family” in inner-city Cleveland. He didn’t meet his drug-addicted father until he was 19 years old. His siblings all dropped out of high school and spent time in jail. And his neighborhood was riddled with gangs and crime.

“What I saw on TV and in movies growing up was all negative. The picture of African-Americans in urban areas was all bad language and bad credit scores and bad habits,” Stallings said. “There were many upstanding, Christian black families in the world, and they needed to be talked about as well.”

Stallings rejected the black family stereotype he was seeing, graduating from high school and college. Today, he resides in California with his wife and two children, whom Stallings helps home-school.

“There are many people out there — white and black — who stay with their families and work through their problems. They aren’t thugs or gang leaders,” He said. “’War Room’ tells the truth about society by showing the reverse of that stereotype.” 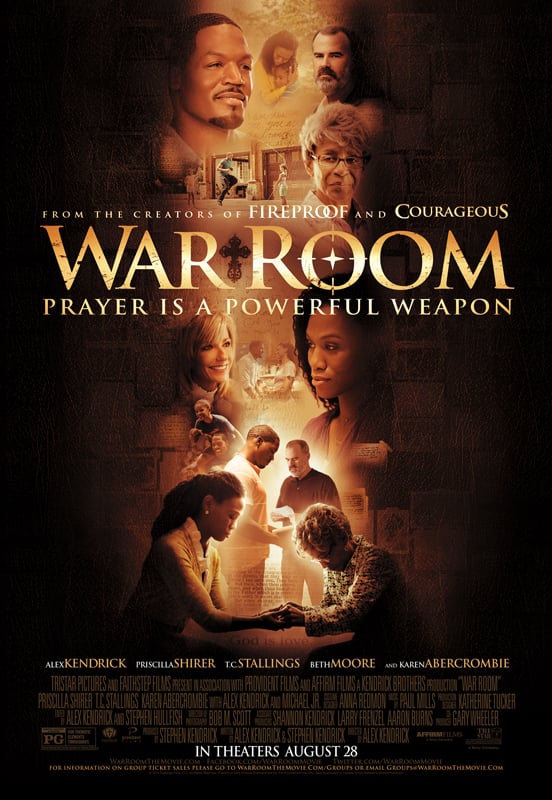 Shirer agrees with Stallings that the entertainment industry often shows “the breakdown of the family unit instead of the health and wholeness that is possible and happening in many African-American families.” But she chose to be a part of the film because of its emphasis on prayer.

READ: The problem with creating ‘Christian’ versions of things

“War Room” draws a parallel between a “prayer closet,” a term referring to a secluded place where Christians pray, and where military officials develop a strategy before they go to war. The movie paints a picture of what it looks like to fight life’s greatest problems with prayer. Shirer believes that no problem is too big to be overcome through prayer, even the problem of racism.

“Prayer is the only thing that will make a lasting difference in the race conversation,” Shirer said. “We can have symposiums or pass policies to get people to behave in the way we would like them to, but for lasting change to take place in the hearts of our people and our nation, God must be involved.”

Shirer has written a companion book for the film, “Fervent: A Woman’s Battle Plan for Serious, Specific, and Strategic Prayer,” released last week.

“War Room” was produced on a $3 million budget and is expected to make much more in ticket sales. The Kendrick brothers’ films have always earned back their budgets. Their last movie, “Courageous,” for example, was produced for $2 million and earned $34.5 million in box office receipts to become one of the most successful independent films of 2011.

The unanswered question when it comes to “War Room” is not whether it will make money, but whether it can induce change in a nation increasingly split across racial lines.

“Racial tension is dangerous and people are dying and a lot of us want to see that stopped,” Stallings said. “We protest and speak out and tweet out, but this problem is much bigger than human beings. This movie will give people a way to take these problems to the Lord and show them that prayer is the best weapon to fight back.”

(Jonathan Merritt is senior columnist for Religion News Service and the author of “Jesus is Better Than You Imagined” and “A Faith of Our Own: Following Jesus Beyond the Culture Wars.” He lives in Brooklyn, N.Y.)