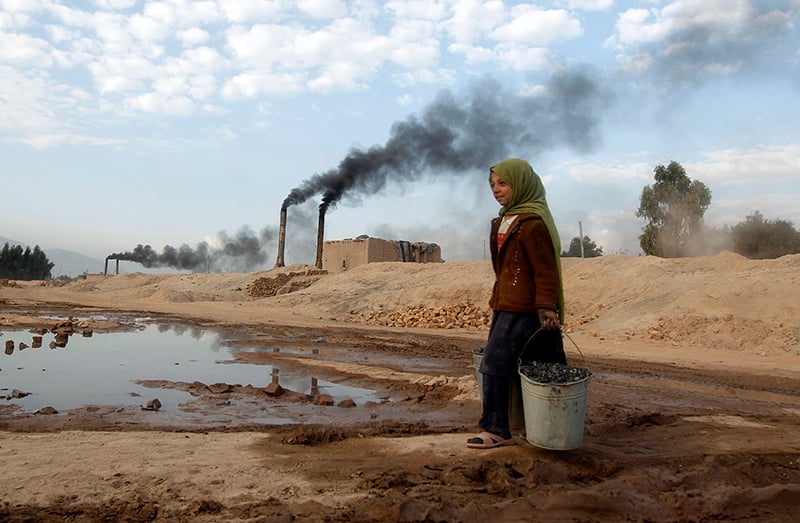 Aisha, 11, carries coal to be used for cooking and heating from a brick-making factory in Jalalabad, Afghanistan, on Dec. 17, 2013. Photo courtesy of REUTERS/Parwiz
*Editors: This photo may only be republished with RNS-CLIMATE-MUSLIMS, originally transmitted on Aug. 18, 2015.

(RNS) Muslim leaders and scholars from 20 countries made a joint declaration Tuesday (Aug. 18) at a conference in Istanbul, calling on Muslims and all nations worldwide to address climate change.

“Our species, though selected to be a caretaker or steward (khalifah) on the earth, has been the cause of such corruption and devastation on it,” the statement says.

Supporters of the Islamic Declaration on Climate Change included the grand muftis (highest authorities in religious law) of Uganda and Lebanon and government representatives from Turkey and Morocco. The conference itself, the International Islamic Climate Change Symposium, was co-sponsored by Islamic Relief Worldwide, the Islamic Foundation for Ecology and Environmental Sciences, and GreenFaith.

The declaration comes at a moment ripe for climate change discussion, in the wake of President Obama’s announcement of a Clean Power Plan on Aug. 3. The plan requires states to reduce carbon emissions from coal power plants starting in 2017. It’s also a timely precursor to the upcoming United Nations Conference on Climate Change in Paris this December.

The declaration cites climate change research, followed by a detailed call to action: Among other things, it puts pressure on those attending the United Nations Conference on Climate Change to set clear goals, calls on wealthy and oil-producing nations to be leaders in curbing greenhouse gas emissions by 2050, and asks that all nations commit to 100 percent renewable energy or a zero emissions strategy.

The statement also quotes Islamic texts, suggesting a religious imperative to care for the environment and calling on the world’s 1.6 billion Muslims to play an active role in these efforts.

The declaration also acknowledges the pivotal role of other religious communities in confronting climate change. Pope Francis’ recent encyclical, “Laudato Si’: On Care for Our Common Home,” highlighted the role of religions in addressing climate change.

“We call on all groups to join us in collaboration, co-operation and friendly competition in this endeavor and we welcome the significant contributions taken by other faiths, as we can all be winners in this race,” the statement says. “If we each offer the best of our respective traditions, we may yet see a way through our difficulties.”