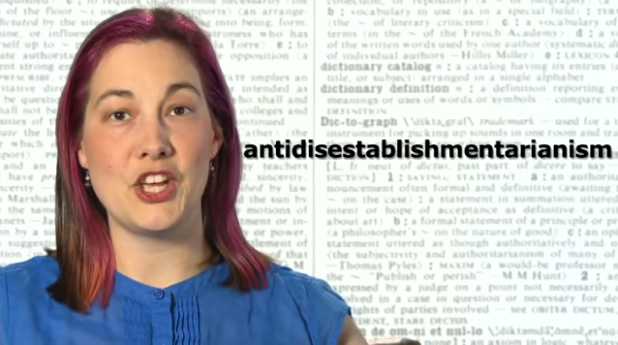 (RNS) "Antidisestablishmentarianism" is often cited as one of the longest words in the English language. It refers to a concept in church-state relations. But it's not actually in the dictionary.

It's a word only a professor could come up with.

Today, the term might mean a movement in favor of the government establishing (due to the double negative) a religion, to create a church-state partnership. It could just mean being in favor of the establishment. Maybe it means something else. There may be no meaning at all.

And that's why it's not in the dictionary. As this video from Merriam-Webster explains, to be in the dictionary a word must be in widespread use and have a meaning. To date, that hasn't happened.

That can change. We sometimes refer to religious political movements as "theocratic," but that's rarely accurate. They don't want churches to control government. They often want a greater partnership between religion and government. This may be moderate antidisestablishmentarianism (e.g., if they want faith-based initiatives and voucher programs for private schools) or extreme antidisestablishmentarianism (e.g., a nationalistic movement moving to establish or keep a state church).

So, consider this the start of the "proantidisestablishmentarianism lexicographic movement," a term only a professor would come up with.

(Tobin Grant is a political science professor at Southern Illinois University and associate editor of the Journal for the Scientific Study of Religion.)