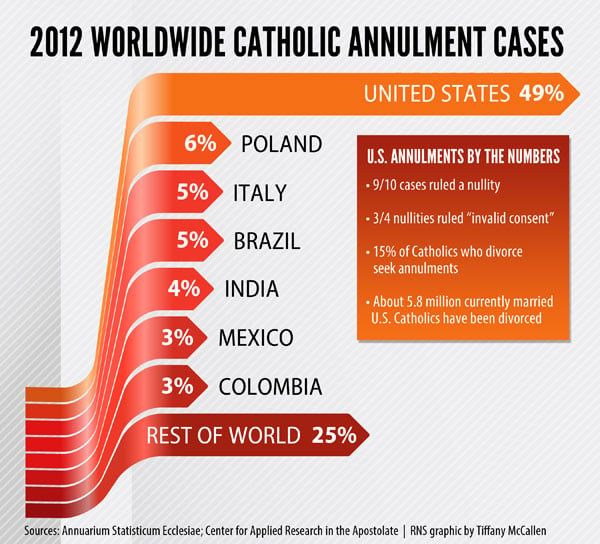 VATICAN CITY (Reuters) - Pope Francis has reformed the Roman Catholic Church's cumbersome procedures for marriage annulments, a decision keenly awaited by many couples around the world who have divorced and remarried outside the Church.

The Vatican said on Monday that the pope had written a document known as a Motu Proprio, Latin for "by his own initiative", that changes the way Catholics get annulments.

The details of the document, which is expected to streamline and simplify the procedure, will be released on Tuesday at a Vatican news conference.

An annulment, formally known as a "decree of nullity," is a ruling that a marriage was not valid according to Church law because certain prerequisites, such as free will, psychological maturity and openness to having children, were lacking.

The 1.2 billion member Church does not recognise divorce. Catholics who divorce and re-marry outside the Church in civil services are considered to be still married to their first spouse and living in a state of sin. This bars them from receiving sacraments such as communion.

The new procedures follow the pope's appointment last September of an 11-member commission of lawyers and theologians to propose reform of the process. The Vatican said at the time that he wanted to "simplify and streamline" the procedure while "safeguarding the principle of the indissolubility of marriage".

Many couples and priests have complained that the current procedures are outdated and too complicated, and discourage even those with legitimate grounds for an annulment from even trying.

Most annulments take place at the local diocesan level. Each decision must be automatically reviewed by a second tribunal even if it is not contested by one of the parties. Reformers argue that step is superfluous and should be eliminated.

Cases in which the two tribunals reach opposing decisions are sent to a Vatican appellate court for a decision.

The situation of divorced and remarried Catholics who want to fully participate in the Church is a topic of great debate, particularly in countries such as the United States and Germany, and will be a main topic at a synod of bishops from around the world at the Vatican next month.

Making it easier for divorced couples to receive annulments would allow them to return to the sacraments.

Progressive bishops want the Church to be more merciful toward Catholics whose first marriages have failed.

One Vatican expert on marriage annulments said the new rules would not change the criteria for getting annulments but make the procedures easier.