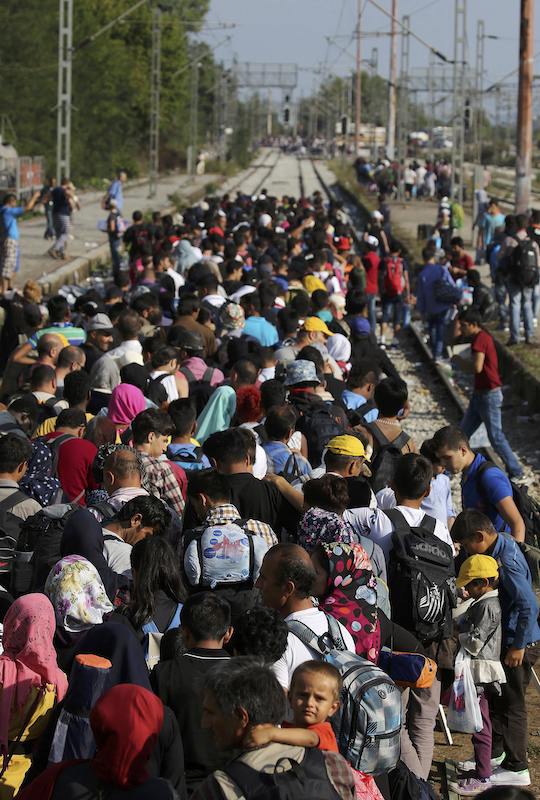 Syrian refugees wait at Idomeni train station at Greece’s border with Macedonia, on September 11, 2015. Pope Francis wants every parish in Europe to take in one family. Photo courtesy of REUTERS/Yannis Behrakis

VATICAN CITY (Reuters) – Responding to a call from Pope Francis for every Church parish to house refugees, the Vatican City said on Friday it had taken in a family that had fled the war in Syria.

The family — a father, mother and their two children — came from Damascus and are Melkite Greek Catholics, a Christian church with close ties to the Roman Catholic Church.

The Vatican said in a statement that the family, which was not named, arrived in Italy on Sept 6, the day Pope Francis made his appeal for European parishes to open their doors to refugees. The four Syrians have since asked for asylum.

“According to the law, for the first six months following the request for asylum those seeking international protection cannot work. During this time, they will be helped and accompanied by the Parish of Santa Anna,” the Vatican said.

The Vatican City, a micro state which sits in the heart of Rome, contains two parishes — Santa Anna and St. Peter’s Basilica. The Vatican said it could not yet provide any information about a second family that is expected to be housed by the St Peter’s administration.

Hundreds of thousands of people, mostly fleeing war and poverty in the Middle East and Africa, have swept into Europe this year in an influx the 28-nation European Union has struggled to absorb.

READ: The global refugee crisis is a moral test for all of us (COMMENTARY)

Looking to help ease the crisis, the pope urged some 120,000 parishes across Europe to take in one family each. His appeal has drawn a mixed response so far.

Some parishioners have been openly hostile to the idea of welcoming in Muslims. Monks in a village in Slovakia had to withdraw an offer to house Christian Syrian refugees after locals balked at the idea.

The vast majority of Syrians are Muslims, but its small Christian community is one of the oldest in the world, making up an estimated 10 percent of the population before the outbreak of the Syrian unrest in 2011.

According to its website, the Melkite Greek Catholic Church had some 150,000 members in Damascus in 2010. It is not clear how many have stayed in the city.