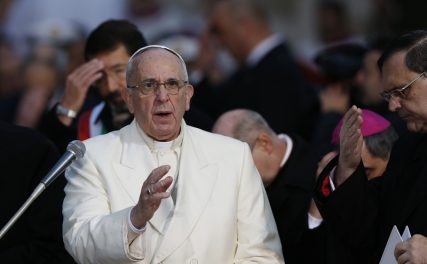 NEW YORK (Reuters) For months, gay Catholics have laid out plans for Pope Francis’ visit to the United States: They will fly rainbow flags, wear rainbow prayer cloths, carry rainbow rosaries. A Tumblr page is being set up, an online petition will circulate.

More telling, perhaps, is what they won’t do.

Gay rights activists say they have no intention of staging protests, sit-ins or large-scale demonstrations during the September 22-27 visit over the treatment of gay Catholics by church leaders, who have lobbied against same-sex marriage and forced the firings of gay workers from their institutions.

It’s an intentionally low-key approach that gay rights leaders hope will improve relations with the Roman Catholic Church, without the risk of offending a pope who is both popular and has offered a more merciful message.

The pontiff’s first-ever visit to the United States comes just months after a seminal moment for gay Americans, when the Supreme Court made same-sex marriage legal across all 50 states.

“We’re not looking for a confrontation opportunity,” said Lisbeth Melendez Rivera, head of Latino and Catholic initiatives at Human Rights Campaign, which works for gay, lesbian, bisexual and transgender, or LGBT, equality. “We’re looking for dialog that leads to the full inclusion of our people in the church.”

Gay Catholics have been energized by comments made by Francis, who famously replied, “Who am I to judge?” when asked about gay men serving in the clergy the first year of his papacy. More recently, the pope encouraged parents to be more accepting of their gay and lesbian children and met privately with a transgender man at the Vatican.

While openly pushing for a more inclusive church, Francis has nevertheless stuck to Catholic doctrine, like when he indicated in January that the church was threatened by same-sex marriage. Change in doctrine, gay activists know, is likely to come slowly, if at all.

READ: Conservatives outraged at gays on White House guest list for Pope Francis! (Vatican, not so much)

With that in mind, organizers did discuss the possibility of a more forceful presence during the papal tour to Washington DC, New York City and Philadelphia, said Ross Murray, director of programs for GLAAD, a gay and lesbian media monitoring group.

“But I think for a lot of these Catholics, especially those who feel a sense of hope with Francis, this is really about how to carefully call the hierarchy into the next relationship phase with LGBT people.”

What that next phase entails is difficult to predict. The church remains a difficult fit for many gays and lesbians, who make up roughly 4 percent of 78 million U.S. members, advocates say. The church counsels abstinence and teaches that homosexuality is an affliction rather than sexual identity, while same-sex marriage is not recognized.

“They don’t hear how their words are not only hurting the LGBT community, but also the LGBT community’s families,” said Nicholas Coppola, a gay Catholic who was removed from a lay ministerial position at his parish after he married.

The church’s position has left it out of step with many American Catholics. A Pew Research study found that 75 percent of U.S. Catholics, ages 18-29, support marriage for same-sex couples, though older Catholics are less supportive.

“We have to remember that the church is not just a hierarchy,” said John Freml of Equally Blessed, a coalition of Catholic groups supporting gay and transgender rights. “The bishops are very vocal and very loud, but they represent a very small portion of the Catholic Church.”

READ: Gay Catholics find a new tone under Pope Francis, and from their own bishops

Even organizing a restrained presence has had challenges. Gay and lesbian groups have been denied official involvement in the numerous booths and forums scheduled for a summit on families organized by the church in Philadelphia before the pope’s visit. The only participant from the community will be a celibate gay man.

Activists hoped to hold supplemental gay and transgender workshops, including one on gender identity, at a Catholic church near the Philadelphia convention center that will play host to the four-day conference.

But the workshops were later canceled after an investigation by Archbishop Charles Chaput, and will instead be hosted by a Methodist church.

At the convention center, however, 14 families with gay and transgender members and other gay people carrying rainbow rosaries will engage where they can.

Other measures include an online petition asking the pope to denounce firings of gay or transgender people who work for the church, and a Tumblr page with images of gay Catholics.

GLAAD and similar groups sent a letter to the pope seeking a meeting, but have yet to receive a response. For now, activists plan to kneel in prayer along with two million others expected to attend a papal Mass in Philadelphia.

“The pope is known to wander,” Rivera said. “We hope that maybe, just maybe, our lively colors will call on him… and that he’ll wander over to us.”