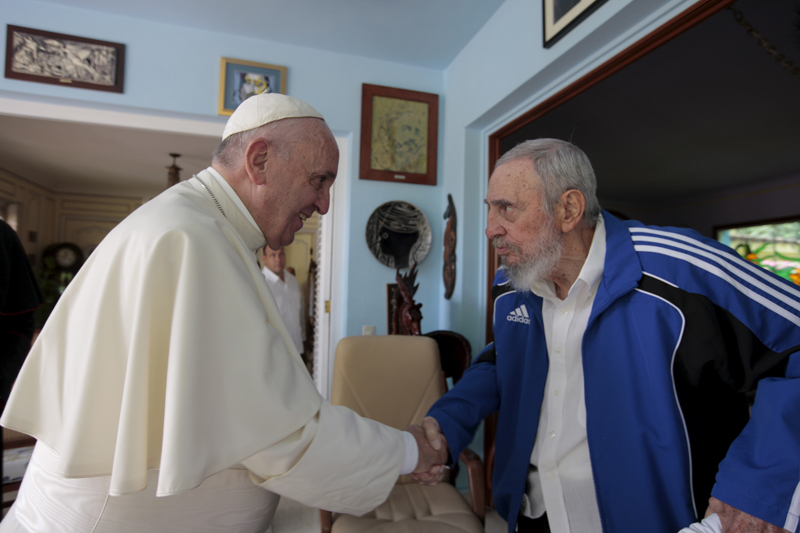 Pope Francis meets with former Cuban President Fidel Castro in Havana, Cuba, on September 20, 2015. Photo courtesy of REUTERS/Alex Castro-Castro Family/Handout via Reuters
*Editors: This photo may only be republished with RNS-POPE-FIDEL, originally transmitted on September 21, 2015.

(RNS) Pope Francis met with aging revolutionary Communist Fidel Castro on Sunday (Sept. 20) in Castro’s Havana home, where they chatted “informally” about “protecting the environment and the great problems of the contemporary world,” according to Vatican Radio.

And Castro had a gift for Francis — a copy of “Fidel and Religion” — a book based on 23 hours of interviews between him and Frei Betto, a Brazilian Dominican friar. The focus of the book is Castro’s views on “two of the most important historic wellsprings of man’s thinking and emotions — Christianity and Marxism.”

A 1988 English edition of the 1985 book, shows that Castro not only knows his former faith, he has practice chatting with popes, having met both St. John Paul ll in 1998 and retired Pope Emeritus Benedict XVI in 2012.

Even a quick scan turns up interesting nuggets:

(Lest anyone get a rosy impression, The Wall Street Journal also reminds us that once Castro came to power and established a No-Catholics-allowed Communist Party, he closed down that prestigious school, declared Cuba to be an atheist state, expelled many priests and nuns, sent Havana Cardinal Jaime Ortega to a work camp and canceled Christmas for three decades.)

READ: Two Cuban dissidents say they were detained on way to see pope

However, he points out later that he never really developed a personal religious faith because he was entirely “devoted to the development of a political faith.”

“Christ didn’t choose the rich to preach the doctrine; he choose 12 poor ignorant workers — that is he chose the proletariat of the times. … At times I’ve referred to Christ’s miracles and have said, ‘Well, Christ multiplied the fish and the loaves to feed the people. That is precisely what we want to do with the Revolution and socialism.'”

Castro’s critique of the historic Catholic Church is that it has been used “as a tool for domination, exploitation and oppression for centuries.” Yet he has kind words for exceptions to this. When U.S. bishops visited in 1985, Castro met with them and praised Christian concepts of sacrifice, austerity and humility.

Said Castro: “I told them that if they organized a state in accord with Christian precepts, they’d create one similar to ours.”

The 353-page book goes year by year through Castro’s life and his philosophy. One final point:

On compatriot in Communist revolution Ernesto “Che” Guevera, whose image loomed over Revolution Square where the pope offered Mass on Sunday, Castro says, “If Che had been a Catholic, if Che had belonged to the Church, he would probably have been made a saint.”

Francis gave Castro several books,  including one by Italian priest Alessandro Pronzato and another by Spanish Jesuit Segundo Llorentea. The pontiff also gave him a book and two CDs of his homilies, as well as his two encyclical letters, “Lumen Fidei” and “Laudato Si’.”