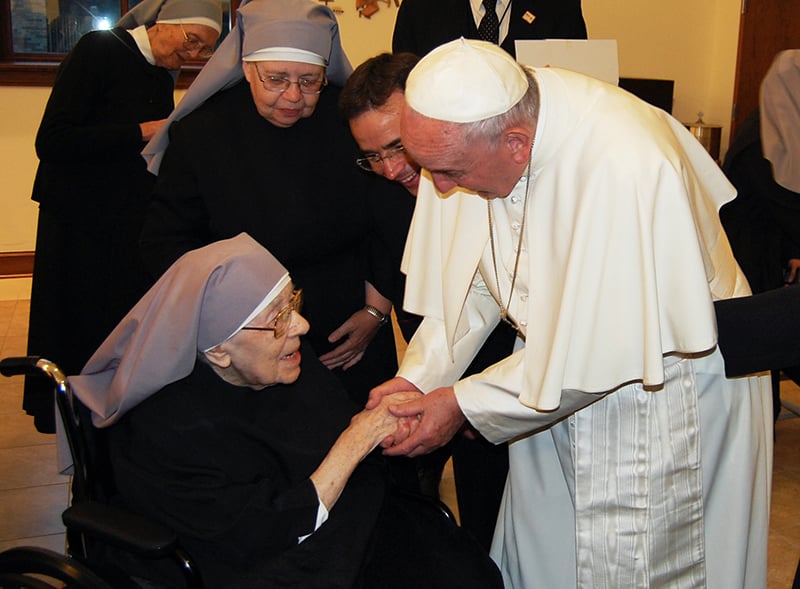 Pope Francis on Sept. 23, 2015, made an unscheduled stop to a convent of nuns to show his support for their lawsuit against President Barack Obama’s health care law. Photo courtesy of the Becket Fund for Religious Liberty

WASHINGTON (Reuters) Pope Francis on Wednesday (Sept. 23) made an unscheduled stop to a convent of nuns to show his support for their lawsuit against President Barack Obama’s health care law.

Vatican spokesman the Rev. Federico Lombardi said the visit to the convent of the Little Sisters of the Poor was a “brief but symbolic visit.”

Last August, a federal appeals court in Denver put on hold its ruling that the order of Roman Catholic nuns must comply with a contraception mandate in the law, giving the group time to petition the U.S. Supreme Court.

The nuns had sued under the Religious Freedom Restoration Act over the birth control provision of the 2010 Affordable Health Care Act, widely known as Obamacare.

The sisters argued that the law forces them to provide insurance coverage for their employees to support contraception and sterilization services in violation of their religious beliefs, or face steep fines.

Under a compromise crafted under the health care law, religious groups can opt out of paying for the services, but a third party or an insurance carrier must foot the bill.

The sisters, who operate more than two dozen nursing homes nationwide, said that still makes them complicit in providing artificial birth-control services even if they did not directly pay for them.

News
Pope Francis talks about Benedict, criticism and life after COVID-19 in new interview
News
After Nice attacks, Pope Francis and French Catholics call for peace with Muslims
Opinion
Pope Francis on civil unions: Another step toward common ground with the LGBTQ movement
News
Taco trucks and voter guides boost political profiles of faith communities at the margins
News
With rising COVID-19 cases inside the Vatican, pressure mounts for Francis to don a mask