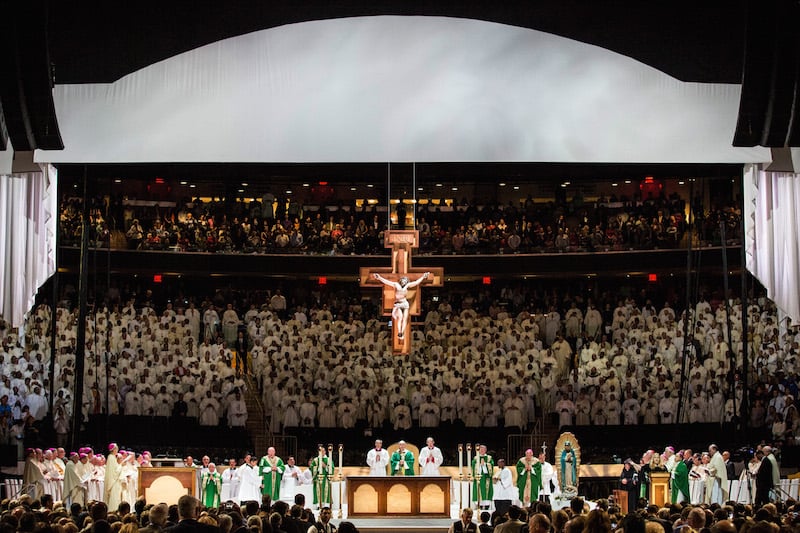 And he spoke softly, in an arena turned into a hushed cathedral.

He spoke about those who are lost amid the din of the great city, about “all those people who don’t appear to belong, or are second-class citizens,” about those abandoned “in deafening anonymity.”

And he exhorted the 20,000 worshippers who filled the stands to go and let the light of Christ “shine on every corner of this city, on our fellow citizens, on every part of our lives.”

Despite the “hidden riches” of diversity in a metropolis like New York, Francis said, speaking in his native Spanish, “living in a big city is not always easy.”

“(B)ig cities,” he said in his homily, “also conceal the faces of all those people who don’t appear to belong, or are second-class citizens.”

“In big cities, beneath the roar of traffic, beneath ‘the rapid pace of change,’ so many faces pass by unnoticed because they have no ‘right’ to be there, no right to be part of the city,” the Argentine-born pope, the first Latin American pontiff in history, continued. Pope Francis bows down as he celebrates Mass at Madison Square Garden in New York on September 25, 2015. REUTERS/Carlo Allegri – RTX1SJ4B

“They are the foreigners, the children who go without schooling, those deprived of medical insurance, the homeless, the forgotten elderly. These people stand at the edges of our great avenues, in our streets, in deafening anonymity. They become part of an urban landscape which is more and more taken for granted, in our eyes, and especially in our hearts.”

The hope of faith, on the other hand, is “a hope which liberates us from the forces pushing us to isolation and lack of concern for the lives of others, for the life of our city. A hope which frees us from empty ‘connections,’ from abstract analyses, or sensationalist routines. A hope which is unafraid of involvement, which acts as a leaven wherever we happen to live and work. A hope which makes us see, even in the midst of smog, the presence of God as he continues to walk the streets of our city.”

Click on the logo to read more Religion News Service coverage of the pope’s visit to the U.S.

Again and again, Francis urged his listeners to do as Jesus instructed his followers 2,000 years ago: “To go out and meet others where they really are, not where we think they should be. Go out, again and again, go out without fear, without hesitation. Go out and proclaim this joy which is for all the people.”

The exhortation to go out, into the streets, into the world, out to the margins, to the peripheries of society — peripheries that can exist even in the midst of a crowded city — is a theme that Francis has repeatedly struck since he arrived in the U.S. on Tuesday afternoon, and it is one that has been at the heart of his ministry since he was elected pope in 2013.

For Francis, faith is empty unless it is put into action, unless it engages others, encounters others, accompanies them, especially in hardship.

READ: Pope Francis to UN: The environment is sacred, like humanity

Dialogue amid disagreement, finding joy through sacrifice — these were notes he hit even in his speeches in Washington, his first stop, where he met President Obama and addressed Congress, and also earlier Friday when he spoke to the United Nations in Manhattan.

But the rest of the day marked a pivot of sorts from high-profile meetings with the politically powerful to the more intimately pastoral events of this visit, his first ever to the U.S.

On Friday afternoon, for example, Francis visited a Catholic school in Harlem that serves mainly children of immigrants, and after driving in the popemobile through Central Park to give tens of thousands who were unable to attend any other events a chance to see him, he came to the Garden to celebrate Mass.

On Saturday morning he was to head to Philadelphia, the last city on his tour, where he was scheduled to meet with thousands of immigrants at Independence Mall.

On Sunday morning he is to visit a prison — a meeting he schedules into every foreign visit — and then later that afternoon he is to celebrate an outdoor Mass on the Benjamin Franklin Parkway in honor of Catholic families, a grand finale that organizers say could draw upwards of a million people.