Viola Davis at the Primetime Emmy Awards Press Room at the Microsoft Theater on September 20, 2015 in Los Angeles, Calif.

This time last week I was bracing myself for the inevitable: multiple LDS websites and blogs writing up the 2015 Emmy awards in terms of which female stars had most stylishly covered the most flesh.

That’s because for the last several major awards shows — the Oscars, the Grammys, the Emmys — the Mormon world has been quick to criticize those stars who showed too much.

Always in a nice way, mind you — singling out the actresses who, for various reasons, chose independently to honor our strange Mormon habits of covering shoulders, backs, and thighs. (In many cases, they did this because they were old, pregnant, or trying to hide a body that Hollywood considered to be “unforgivably” overweight. But whatever.)

But this time, the onslaught never came. I have been watching the news for a week now. It has not happened.

Has the tide shifted in the Mormon modesty wars?

I am cautiously optimistic.

It is a good sign when Dr. Julie de Azevedo Hanks is able to write sensibly and compassionately about modesty and have it carried in the uber-conservative LDS online magazine, Meridian.

“When we reduce the concept of modesty to what females wear, we are reinforcing the very thing that modesty is supposed to help avoid: the sexual objectification of women’s bodies,” Hanks wrote last month. 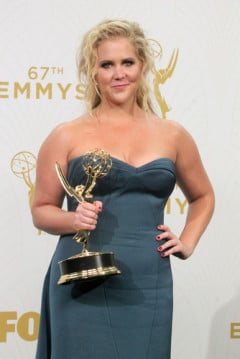 Amy Schumer at the Primetime Emmy Awards Press Room at the Microsoft Theater on September 20, 2015 in Los Angeles, CA

It is a good sign when LDS Living publishes stories like “What We’re Still Missing about Modesty,” which took a careful look at what modesty means in scripture, and “5 Ways to Help Youth See Modesty Differently.” The magazine noted that while those five ways focused on dress, modest principles could also be applied to speech, attitude, and our approach to consumerism.

Amen to that. That’s progress even since last spring, when Elder Tad Callister of the Presidency of the Seventy placed the responsibility for men’s spiritual integrity squarely on the primly cap-sleeved shoulders of the Church’s women:

The dress of a woman has a powerful impact upon the minds and passions of men. If it is too low or too high or too tight, it may prompt improper thoughts, even in the mind of a young man who is striving to be pure.

Men and women can look sharp and be fashionable, yet they can also be modest. Women particularly can dress modestly and in the process contribute to their own self-respect and to the moral purity of men. In the end, most women get the type of man they dress for.

Elder Callister’s cringeworthy comments about female dress standards reflect a malingering LDS focus on women as potential jezebels who need to be restrained lest they corrupt male virtue.

As the Salt Lake Tribune reported in the wake of those comments last spring, Mormonism’s undue fixation with female dress unwittingly reinforces the larger culture’s sexual objectification of women:

“The current discourse on modesty undermines women’s relationship to themselves, to their sexuality, and to men,” LDS sex therapist Jennifer Finlayson-Fife writes in the most recent issue of Exponent II. “Far from protecting females from seeking male approval, the rhetoric on modesty unwittingly reinforces it. At the same time we are taught that pleasing men through sexual availability is not necessary, we are taught to please men and God by covering and suppressing our sexuality.”

Either way, women are sexual objects.

It’s possible that the absence of the once-ubiquitous “modest gowns from last night’s awards” story is just a fluke, and that they’ll be back with a vengeance come Oscar time.

If nothing else, we have seen that the world will continue happily rotating on its axis even if the Mormons don’t take it upon themselves to comment upon what women wear.