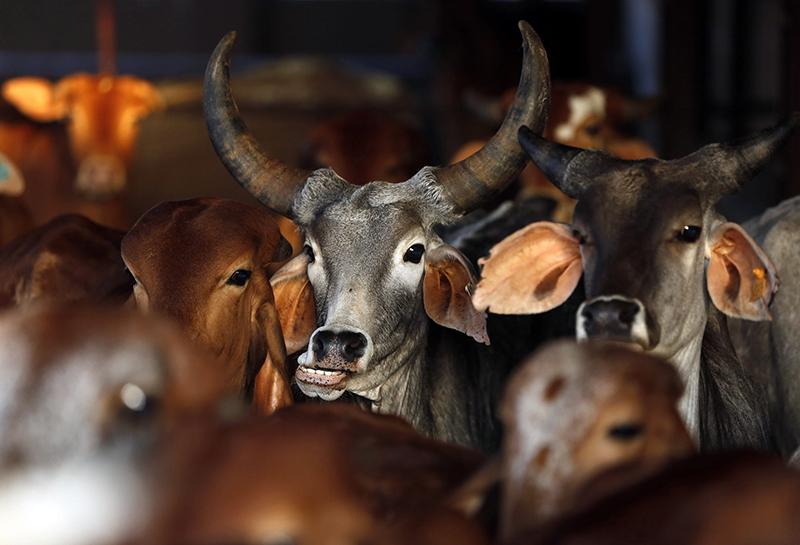 Rescued cattle are seen at a “goushala”, or cow shelter, run by Bharatiya Gou Rakshan Parishad, an arm of the Hindu nationalist group Vishwa Hindu Parishad (VHP), at Aangaon village in the western Indian state of Maharashtra on February 20, 2015. Hindu nationalists in India have stepped up attacks on the country’s beef industry, seizing trucks with cattle bound for abattoirs and blockading meat processing plants in a bid to halt the trade in the world’s second-biggest exporter. Photo courtesy of REUTERS/Shailesh Andrade

NEW DELHI (Reuters) – A Hindu mob killed a Muslim man in India over rumors that he butchered a cow, unleashing violence that police on Wednesday blamed on tension fuelled by politicians who seek strict protection of an animal many Hindus consider sacred.

While many members of India’s majority Hindu community see cows as holy, beef is widely eaten by Hindus in parts of the south, as well as by members of lower castes and minority Muslims and Christians.

Mohammad Akhlaq, a blacksmith, died after being kicked and beaten with stones by at least 10 men in the town of Dadri, 50 km (30 miles) from the capital, New Delhi, on Monday night.

A larger group had earlier gathered outside his home, accusing his family of secretly eating beef.

“I screamed and shouted to tell the mob that we did not eat beef, and they should stop beating my father and my brother, but they pushed me away,” his daughter, Sajida Saifi, who watched the attack helplessly, told Reuters.

Akhlaq’s son was taken to hospital with severe injuries.

The murder triggered clashes between Hindus and Muslims in the town, and extra police were deployed to keep the peace.

The rhetoric about cow protection had emboldened some people to act as vigilantes, said police officer Anurag Kumar, who is investigating the lynching.

“The incident is shocking,” he said. “The Hindu mob felt they had a licence to kill.”

India is the world’s largest exporter of beef and its fifth biggest consumer, but Prime Minister Narendra Modi’s government wants a nationwide ban on cow slaughter and the beef trade, which is run mostly by Muslims.

It has clamped down on the illegal trade of cattle with Muslim-majority neighbour Bangladesh, and two states ruled by Modi’s party have tightened laws to protect cows.

Police arrested six of the 30 people accused in Akhlaq’s murder, and sent a sample of meat from his home for forensic tests to check if it was beef.

Eating beef is not illegal in India’s populous northern state of Uttar Pradesh, where Dadri is located, although the slaughter of cows is banned.

But even if the family had been eating beef, that was no justification for murder, Saifi said.

“I saw my father being killed and no one came to save him,” she said. “How can eating meat or beef become such a big crime?”