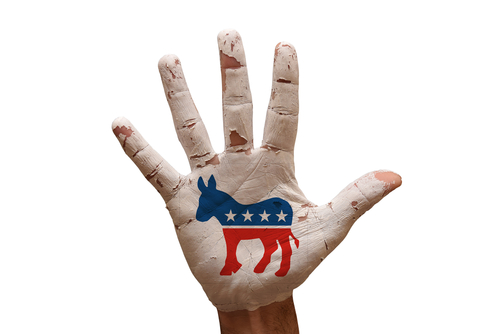 A palm painted with the U.S. democratic party symbol.

As the Democratic presidential candidates gather Tuesday night in Las Vegas, it will be fascinating to hear how their rhetoric and goals contrast with that of the Republican candidates, whom we have heard much more from thus far in this election season.

One thing I will listen for is whether any of the Democratic candidates offer an explicit moral values – or dare we say religious values -- agenda.

One of the recent peculiarities of our politics has been the Republican embrace of religious and moral values language and the Democratic abandonment of it. Of course these are related – in the polarization of our politics, the more Republicans talk God and values, the more Democrats go quiet.

It is easy to see Republicans as the religion and ethics party and Democrats as merely secular pragmatists. But this is far too simple. It’s also bad for our politics. And it’s bad for the Democrats.

The contemporary Republican Party reflects a certain kind of religiosity – largely white, Christian, conservative, and evangelical. The religious and moral vision of that particular tribe has certainly influenced Republican rhetoric and politics. Talk of God flows freely, together with a religiously tinged American exceptionalism, a default economic libertarianism, and a moral vision often focused on sex, family, and bioethical issues.

The contemporary Democratic Party, by contrast, is both more secular and more diverse in its religiosity. Talk of God is perhaps inevitably more muted, belief in American exceptionalism is weaker, and economic libertarianism is rejected.

But this in itself is not a moral vision. Can we find one in Democratic politics?

It depends on which Democrat is talking, for sure. And Democrats are often prone to lapsing into policy-wonk talk and a pragmatic problem-solving mode that obscures any underlying values.

But I do think there is (often) a moral vision underneath. That moral vision has a proud lineage that once was and sometimes still is grounded in religious convictions.

I think the simplest single label for this moral vision is “social justice.” It has at least two major dimensions: economic uplift and leveling, and inclusive participatory democracy.

When they defend progressive taxation, the closing of tax loopholes that benefit the wealthy, and other steps to reduce income inequality, they are standing in that same tradition in its economic leveling dimension.

When Democrats fight to protect and expand voting rights, attack any form of discrimination based on gender, race, or sexual orientation, and welcome comprehensive immigration reform, they reflect a longstanding commitment to broadening participation in American democracy for more and more people.

As a Christian ethicist, I can say with confidence that the agenda of the major voices in our field since the very birth of our discipline in the late 19th century has tracked closely with these priorities. Protestant social ethics has believed that the best witness of biblical faith demands active concern for the weak, the powerless, and the excluded. These same themes have resonated in modern Catholic social teaching as well.

Both contributed to progressive social change efforts all around the western world, notably involving uplift of the poor and restrictions on the enormous power of modern industrial capitalism and its leadership class.

This religious-ethical tradition has left a profound mark on American law, and it remains at least partly visible in Democratic politics. That party should go ahead and claim it, along with its religious roots.

But that will be the topic of another column.