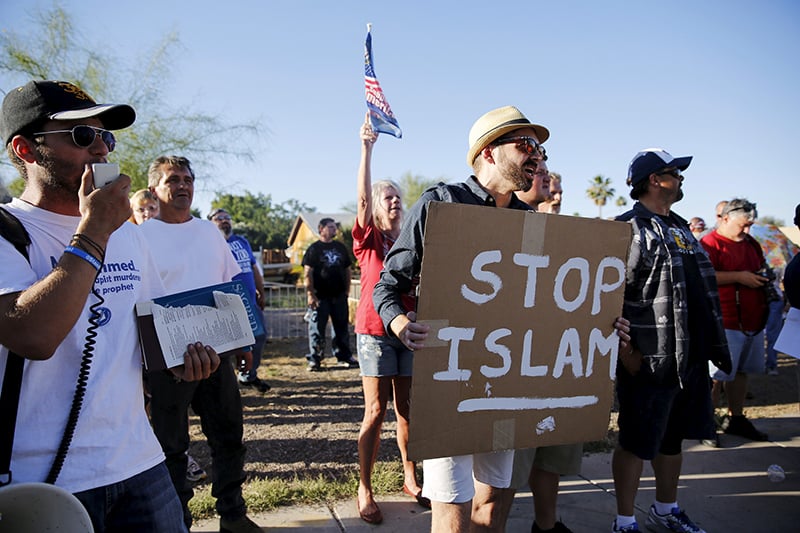 Demonstrators shout during a “Freedom of Speech Rally Round II” outside the Islamic Community Center in Phoenix on May 29, 2015. Photo courtesy of REUTERS/Nancy Wiechec
*Editors: This photo may only be republished with RNS-PALLY-COLUMN, originally transmitted on Nov. 4, 2015.

(RNS) We are very fortunate to have free speech rights. It allows us to say things others find sinful or dangerous — such as, women should have equal access to political, educational and employment opportunities. Ditto for racial and religious minorities.

Though many believe these ideas are biblically condemned, they are protected by law.

Last week, we were assured that bandying about with severed pig heads is also protected expression. It is protected even when accompanied by shouts of “Muslims burn in hell!” in the middle of a Muslim festival.

So ruled the 6th U.S. Circuit Court of Appeals. In 2011, a Christian group, the Bible Believers, heckled and harassed Muslims at the Dearborn, Mich., festival, provoking the festivalgoers. The police warned the hecklers not to come back in 2012. When they did, pig heads and slurs in tow, the police removed the Bible Believers from the area. Two courts held that the police had been justified to prevent escalation into violence.

But the 6th Circuit held that the pig heads stay. “The First Amendment,” the court wrote, “envelops all manner of speech, even when that speech is loathsome in its intolerance, designed to cause offense, and, as a result of such offense, arouses violent retaliation.”

I’m glad the court did. While only a fraction of Americans consider Muslims to be dangerous (29 percent), promoters of violence (26 percent) or “spiritually evil” (19 percent), according to a recent LifeWay Research poll, the belief that Muslims burn in hell has as much a right to the public microphone as any other idea. No one stopped Franklin Graham, Donald Trump or Ben Carson from making anti-Muslim remarks — nor should they have.

It’s not a radical piece of jurisprudence. Our legal defenses of free expression are robust, and courts usually rule in favor.

But now I wonder: Since we have the right to anti-Muslim theatrics, what are we going to do with the rest of our time? We have many more rights than we use, and while I wouldn’t give a single one up, I have to decide which of my legally protected possibilities I am going to spend time on. I have the right to plan elaborate theatrics about people I dislike. But I don’t.

Most of us don’t make life choices based on rights — though they work something like an operating system, as indispensable background support. We make choices according to our abilities, resources, commitments and values.

Mine happen to include the many lessons about treating the stranger and even enemy well. The results, the Bible seems to suggest, are far better than the alternatives. And evolutionary biology, it seems, is catching up to Scripture. Our default wiring is for cooperation, or “reciprocal altruism” as biologist Robert Trivers calls it, because it ensures the greatest likelihood of survival not only among families and clans but also in larger societies.

So instead of spending time organizing constitutionally protected anti-Muslim displays, whose legality I hold dear, here are some other things to do with your day.

Follow Isaiah 11:6 — “And a little child shall lead them” — and start a school in your neighborhood like the preschool in Israel, Yad b’Yad (“Hand in Hand”), that serves Arab and Jewish children. What about Muslim and Christian kids, or children of all three faiths? 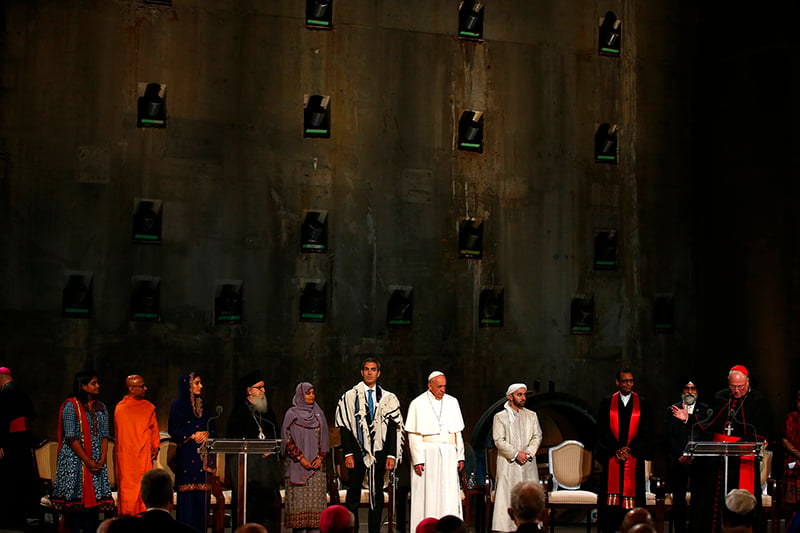 Cardinal Timothy Dolan, far right, speaks as Pope Francis stands with Jewish and Muslim leaders as he visits the museum to the September 11, 2001 attacks in New York, on September 25, 2015. Photo courtesy of REUTERS/Tony Gentile
*Editors: This photo may only be republished with RNS-POPE-INTERFAITH, originally transmitted on Sept. 25, 2015, and with RNS-PALLY-COLUMN, originally transmitted on Nov. 4, 2015.

Start a pledge drive in your community, like the one organized by Texas pastor Bob Roberts and Virginia Imam Mohamed Magid. They got nearly 200 religious leaders together at Washington’s National Cathedral to pray and sign a pledge rejecting religious prejudice. They also asked our presidential candidates and other political leaders to sign on. “I love Muslims as much as I love Christians,” Roberts said. “Jesus, when you get hold of us, there’s nobody we don’t love.”

Or you can join Ronald Lauder, president of the World Jewish Congress, who last week called the 1965 Vatican declaration, Nostra Aetate (“In Our Time”) a “miracle.” Repudiating the belief that Jewish people are responsible for Jesus’ death, Nostra Aetate helped launch the growing trust and cooperation between Catholics and Jews. In the same spirit, one might reject the idea that all Muslims are responsible for terrorism and go from there.

Or you can watch reruns of Pope Francis’ interfaith ceremony at the National September 11 Memorial and Museum.

Marcia Pally teaches multilingual multicultural studies at New York University and in the theology department at Humboldt University, Berlin. Her book “Commonwealth and Covenant: Economics, Politics and Theologies of Relationality” will be out in early 2016. Photo courtesy of R.S.

Then you’ll be able to compare the results for yourself: What brings more security and trust? Pigheadedness? Or Deuteronomy 10:19: “You are to love those who are foreigners, for you yourselves were foreigners in Egypt”?

(Marcia Pally teaches multilingual multicultural studies at New York University and in the theology department at Humboldt University, Berlin. Her book “Commonwealth and Covenant: Economics, Politics and Theologies of Relationality” will be out in early 2016.) 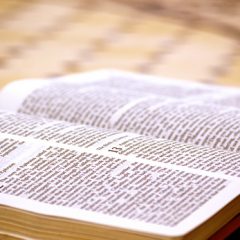