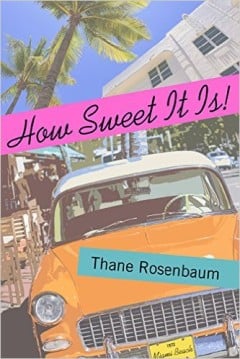 The “love affair” started years ago, when I was the assistant rabbi at Temple Israel in Miami. As part of my job, I visited the sick at Mount Sinai Hospital, which was located on the other side of Biscayne Bay in Miami Beach.

Every time I crossed the causeway into Miami Beach, it felt like a journey back in time to the 1940s. Miami Beach had a “noir” feeling to it, something old-fashioned, and even slightly forbidding.

Grandma and Grandpa (the last generation who would be called bubbe and zeyde) were still rocking in their chairs on the porches of South Beach’s art deco hotels. Those hotels would not become hot and hip for a few more years.

I am living in south Florida again, serving Temple Solel in Hollywood. I am back in the seductive orbit of Miami Beach.

This great American city is the subject of a new novel, How Sweet It Is, by Thane Rosenbaum. Thane is the author of several works of fiction and non-fiction. He is one of American Jewry’s most profound public intellectuals, and a professor of law at New York University.

He is also a native of Miami Beach, and the child of Holocaust survivors.

How Sweet It Is brings the reader back to Miami Beach in 1972. It was the time of the Republican convention. Celebrities like Frank Sinatra, Jackie Gleason (hence, the book’s title, derived from his famous catch phrase), Isaac Bashevis Singer, Muhammad Ali, Meyer Lansky — all were present in Miami Beach in those days. Rosenbaum imagines a dysfunctional family of Holocaust survivors having imaginary encounters with those characters.

Thane Rosenbaum and I chatted about his new book.

What did you like, or dislike, about growing up in Miami Beach? What of that experience continues to stay with you?

Miami Beach seemed separated from the rest of the United States, a coastal peninsula cut off from the continent, with sleepy and strange inhabitants, and even stranger bedfellows: Holocaust survivors and Castro’s exiles, snow birds and deeply tanned, deep-sea fishing locals, retirees and swinging singles, old-line Floridians and Jewish gangsters.

We were separated from Miami by long causeways, which created the illusion that we were castaways — in the truest sense of the word, as in having been cast away.

The counterculture, the antiwar movement, Watergate, the race riots, women’s lib, the burning of draft cards, and the Bronx, all up north, was very distant in our minds. We felt almost impervious to all of that upheaval and tumult. We had found a paradise, surrounded by our own gang of misfits, and a presumption that the rules and conventions of American culture simply did not apply to us.

You write about a number of historical figures who happened to be in Miami Beach at the same time. Is there any evidence that any of them interacted with each other, as they do in the book?

Jackie Gleason and Frank Sinatra actually did pal around together at the hotels and restaurants on Miami Beach. Isaac Singer was surely taking notes for future stories about Jewish refugees and survivors by watching them in lobbies and restaurants, scribbling notes into a pad. There is no evidence that any of the other characters even knew each other — Gleason and Meyer Lansky, for instance. And, surely, Muhammad Ali had not befriended a rabbi as part of his entourage.

As the child of survivors, how has that experience shaped your world view?

My fiction would lead you to think that I’m a Shoah “addict,” but I’m pretty sober about it in my “non-writerly” life. I see anti-Semitism everywhere. I am stunned at the complacency around me. But, I have also devoted a good portion of my life to teaching human rights and moral justice, and serving as a human rights activist — all apart from my more parochial Jewish sensibilities. No doubt the Holocaust backdrop to my life has led to the two competing ideals —  rescue and repair– that are found in my writing, teaching and activism.

For me, the character of the nihilistic, vulgar and profane rabbi is the most chilling and disturbing in the book. Where did that character come from? How do you account for his way of viewing the world and Judaism?

After the Holocaust, Jews were entitled to their own heart of darkness. I imagined a renegade rabbi leading Holocaust survivors away from conventional Judaism and God. I have always found that storyline very intriguing, and I have introduced it several times in some of my other works of fiction, where Rabbi Vered makes cameo appearances. Rabbi Vered is not based on any rabbi that I know of — in Miami Beach or elsewhere — although a religion professor once remarked that he shares some of the world view of the Jewish “death of God” theologian, Richard L. Rubenstein.

How Sweet It Is is a postcard of a pre-hip Miami Beach. How appropriate that Miami Beach has chosen the book for its “one book, one city” program. Come and hear Thane talk about his book, and the city that he so obviously loves.

Miami Beach is, in itself, a Jewish text. It still has much to teach us.