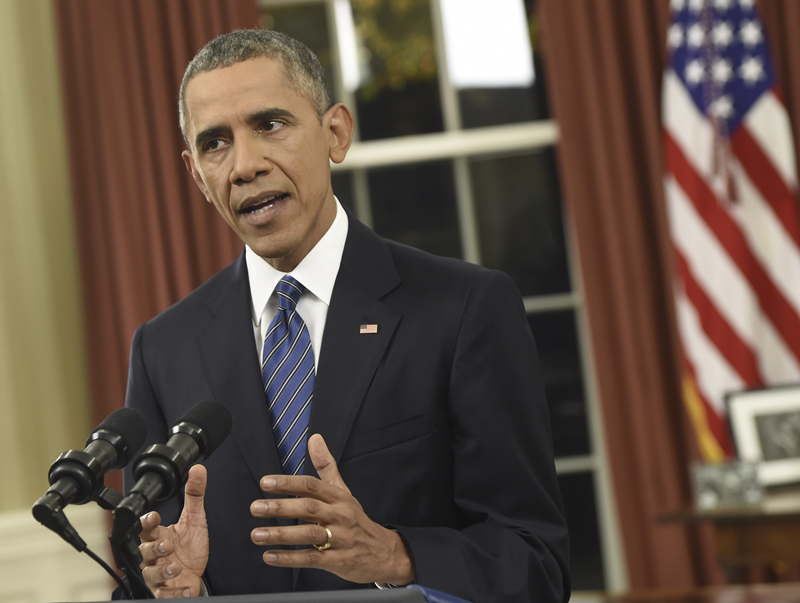 U.S. President Barack Obama speaks about counter-terrorism and the United States fight against Islamic State during an address to the nation from the Oval Office of the White House in Washington, on December 6, 2015. Photo courtesy of REUTERS/Saul Loeb/Pool
*Editors: This photo may only be republished with RNS-OBAMA-TERRORISM, originally transmitted on Dec. 7, 2015.

WASHINGTON (USA Today) President Obama sought to reassure the nation amid renewed fears of terrorism Sunday night, saying the terrorist threat has “evolved into a new phase” of attacks hatched at home by extremists “poisoning the minds” of killers already on American soil.

“I know how real the danger is,” said Obama.

“The threat from terrorism is real, but we will overcome it. We will destroy ISIL and any other organization that tries to harm us,” Obama said. “We will prevail by being strong and smart, resilient and relentless.”

In a 13-minute prime-time televised address, Obama called on Americans not to allow fear to dictate the response to the San Bernardino shootings last week — or the broader fight against terrorism. He said the FBI has no evidence that the killers were directed by terrorist organizations overseas or were part of a broader conspiracy.

But he said the terrorist threat had evolved since 2001, with the lone-wolf Fort Hood shooters, brother Boston Marathon bombers and husband-and-wife San Bernardino killers inspired — but not directed — by the extremist ideology of the Islamic State and similar groups.

He laid the blame on people he said had “embraced a perverted interpretation of Islam.”

The address was the just the third Oval Office address in Obama’s presidency, and comes three weeks after a terrorist attack in Paris killed 130 people and four days after husband-and-wife shooters — apparently inspired by a similar ideology — killed 14 at a California holiday party.

Obama did not announce any new policies or strategies, and he continued to oppose any large-scale ground troop presence in Syria or Iraq, where the Islamic State militant group has its stronghold.

But he said the United States has been ramping up its campaign against the Islamic State over the past few weeks, with more special forces troops being dispatched to advise and assist Syrian opposition forces and Iraqi forces. Since the San Bernardino attacks, Obama has also put an emphasis on combating the extremist ideology that has inspired terrorist attacks by enlisting the help of the Muslim-American community to provide an alternative.

“We must enlist Muslim communities as some of our strongest allies, rather than pushing them away through suspicion and hate,” Obama said.

Obama has also asked Congress to approve a new use-of-force authorization that would update the global war-on-terror resolution Congress first approved in 2001. He’s proposed specific changes in the visa waiver program, and he’s also floated a measure that would prohibit anyone on the “no-fly” terrorist watch list from purchasing a firearm — a measure already rejected by the Republican-controlled Senate.

“What could possibly be the argument for allowing a terrorist suspect to buy a semiautomatic weapon?” Obama said. While law enforcement cannot identify every possible terrorist, he said, “What we can do and must do is make it harder for them to kill.”

After listing what the U.S. must do, Obama went on to list what Americans “must not do.”

First, he said, the nation must avoid “a long and costly ground war.” Then, he cautioned Americans “we cannot turn against each other” by allowing the fight to be defined as America versus Islam. Instead, he said we are at war with a tiny minority of “thugs and killers,” not with Muslims who are our friends and neighbors and who are “willing to die for this country” in military service.

He also called on Muslims in America to confront the hateful ideology espoused by that minority and speak out for religious tolerance, mutual respect and human dignity.” And non-Muslim Americans must reject religious tests for refugees or for elective office. Obama said, “When we travel down that road, we lose.”

“That does not mean denying the fact that an extremist ideology has spread within some Muslim communities.” he said. Obama called on Muslims worldwide to “decisively and unequivocally reject the hateful ideology that groups like ISIL and al Qaeda promote; to speak out against not just acts of violence, but also those interpretations of Islam that are incompatible with the values of religious tolerance, mutual respect, and human dignity.”

He concluded: “Freedom is more powerful than fear.”

News
What four strangers of different faiths learned while living together during a pandemic
News
Each year 1,000 Pakistani girls forcibly converted to Islam
Islam Beyond Phobia
What Jesus means to me as a Muslim
News
Concern among Muslims over halal status of COVID-19 vaccine
News
Christmas holiday bus attacks in Kenya bring condemnation from Christian and Muslim leaders