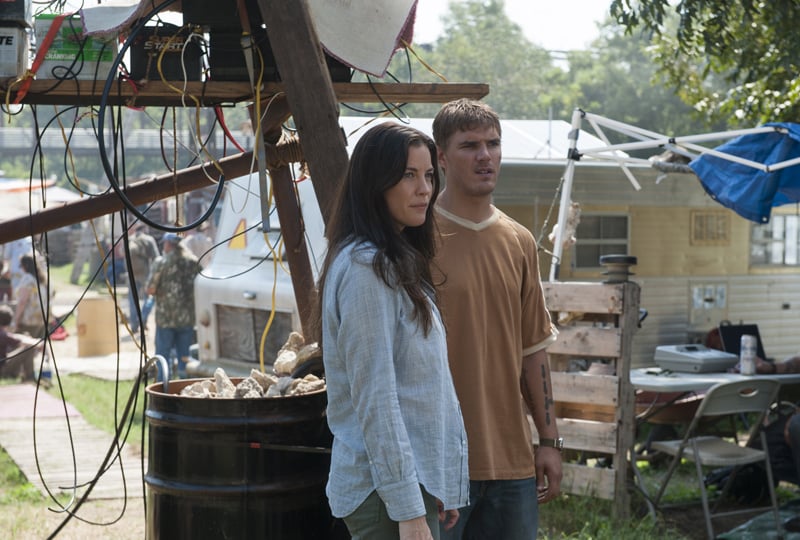 A scene from Episode 20 (season 2, episode 10/season finale) of “The Leftovers” with Liv Tyler and Chris Zylka. Photo by Van Redin, courtesy of HBO

(RNS) With season two of HBO’s “The Leftovers” now over after last weekend’s finale, it’s worth looking back at how much it differed from the first season.

The premise of the series is that several years ago, on October 14, a day just like any other, 2 percent of the world’s population simply disappeared. Left in their wake were the families and loved ones struggling to come to terms with their grief.

Throughout the show’s first season, many fans and critics — including myself — spent countless hours studying the show in the hopes of finding some way to getting to the bottom of the central mystery: Where did the departed go?

This season, however, many viewers stopped caring about that question — and for good reason, considering the show’s creators, Tom Perrotta (who wrote the novel) and Damon Lindelof, said they had no intention of ever revealing an answer. That’s because, they explained, for the characters on “The Leftovers,” that question is irrelevant. What’s relevant is their grief, and how they are responding to it.

Lindelof’s answer no doubt surprised many people. Lindelof was one of the masterminds behind ABC’s “Lost,” a series that, for six seasons, invited viewers to try and figure out the show’s central mystery: What the hell is this island and why were these people brought to it? When the finale failed to give fans all the answers they wanted, they got angry. To this day, many faithful “Lost” viewers have visceral reactions to how the show ended.

The common complaint goes something like: We followed the trail of clues you left us, and they ended up leading nowhere! There were references to “The Wizard of Oz” and “The Chronicles of Narnia” and famous philosophers and cult songs — surely, we thought, if we put all these Easter eggs together, we’ll solve the mystery of the show! 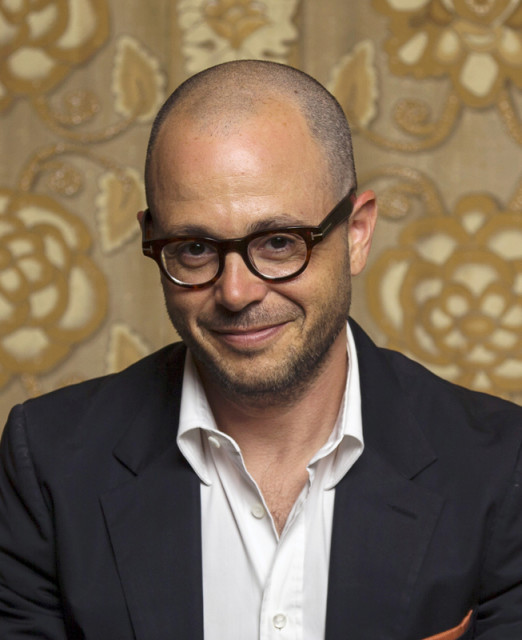 Screenwriter Damon Lindelof poses for a portrait while promoting his upcoming movie “Tomorrowland” in Beverly Hills, Calif., on May 8, 2015. Photo courtesy of REUTERS/Mario Anzuoni
*Editors: This photo may only be republished with RNS-LEFTOVERS-FINALE, originally transmitted on Dec. 7, 2015.

Many longtime Lindelof fans took a similar approach to the first season of “The Leftovers.” Here’s an example: In episode seven of the first season, Kevin Garvey’s (Justin Theroux) father began to lose his mind over the May 1972 issue of National Geographic magazine. As with many of the references on the series, this magazine issue was completely real. You can hold it in your hands, and read it.

READ:  ‘You call that a Christmas tree?’

The issue featured a story on a national park (season two centers on a national park) and one on Cairo (the New York town where Kevin killed Patti, his mysterious cosmic rival) and another about the Minoans (whose population quickly disappeared, kind of like the departed). There’s also an article titled “The Spider that Lives Underwater,” which seemed particularly relevant because one of the first season characters whispered the words “spider” and “underwater” in her sleep. So you’d read the magazine, then go back and watch the episodes again in order to figure out how everything was connected.

Lindelof told me that while he and the other writers have a habit of “going down the rabbit hole” with viewers, he suggested I look at these references in a different way. The allusions in “The Leftovers,” he said, aren’t meant to be unlocked, and that’s not why the writers include them. Instead, he said, he’s fascinated by the question, “What happens to these cultural references when I put them in the context of ‘The Leftovers’?”

That changed everything about how I watched the series: All of a sudden, the hints I thought the writers were tossing out weren’t hints at all; there was no answer to the show’s central question; every seemingly magical element of the show was painfully ordinary.

Last year, Perrotta, who also wrote the book the show is based on, gave an interview to The Atlantic about how Thornton Wilder’s play “Our Town” influenced his novel. The play, he said, reminded him that even the most ordinary details of our lives are charged with meaning when we look at them in a different way: in the case of “Our Town,” that different way is by looking at life from the other side of it — death. 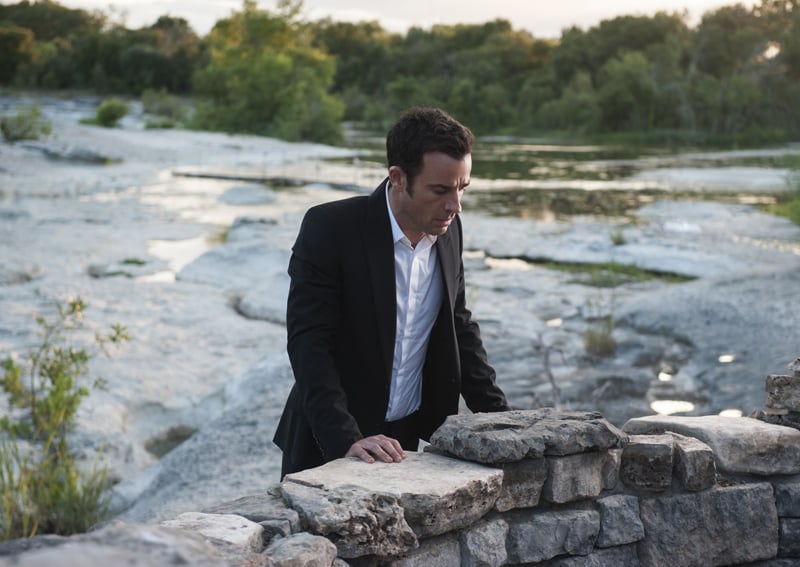 A scene from episode 18 (season 2, episode 8) of “The Leftovers” with Justin Theroux. Photo by Van Redin, courtesy of HBO

In the play, Emily, who died delivering her second child, gets to relive one day of her life. One of her fellow dead suggests she choose an unimportant day to revisit. “It will be important enough,” the character warns. And so Emily goes back to view her 12th birthday, and she’s overwhelmed with everything — every ordinary detail she took for granted when she experienced that moment alive is too much for her to bear now that she’s dead. “I can’t look at everything hard enough,” she says. Perrotta summed up the tragedy of the play like this: “While we’re alive, we don’t view our days in the knowledge that all things must pass.”

When I put that together with what Lindelof told me, I suddenly realized the genius of the show: It wasn’t that nothing was magical; it’s that everything was. Every reference to a song or book, every passing allusion to literature, every lingering shot on some trivial paper towel rack — every single tiny detail was exploding with significance.

“Don’t get trapped obsessing over the big mysteries,” I found the series to be cautioning. “Learn to find the sacred in the most trivial of moments.”

To be sure, there certainly does seem to be inexplicable magic in the universe of “The Leftovers.” Kevin has died and resurrected twice this season, not counting the time his suicide failed when the lake he jumped into dried up. There also do seem to be elements of the show (Mary’s healing, the weirdness with dogs) that require supernatural explanations.

Take, for instance, this season’s much-discussed 10-minute opening: a mythical cavewoman escapes an earthquake, rescues a baby, climbs a tree to eat some fruit, protects the baby from a giant snake, which bites and kills her. The transition from this mythical time-before-time to contemporary Texas was jarring, and the writers made no effort to explicitly harmonize the two stories. In fact, after that opening sequence, the show never returned to the cavewoman, leaving viewers and critics struggling to figure out what it might mean within the context of the greater story “The Leftovers” is telling.

In an interview with Variety, Lindelof said the cavewoman opening was born from a discussion with Reza Aslan, a consultant for the show, on the origins of religion. Presumably, the sequence is meant to evoke various world myths that try to “get at” the bigger point of life. There are obvious echoes of the biblical story of Eve and the serpent: If you eat from a certain tree, you will surely die, and the snake will make sure of it. But any interpretation beyond that is anyone’s guess. When it comes to the cavewoman, it’s probably best to take a cue from the show’s title song and “just let the mystery be.”

Here’s what we can say, and it’s true about “The Leftovers” and it’s true about us: At some point in our history, something went cosmically wrong. Someone did (perhaps metaphorically?) take a bite of forbidden fruit; and now we are all, as a result, living east of Eden, groping in the darkness of hate and misunderstanding, struggling to find our way back home. In the process of that return, some of us find God, and some of us name him Jesus; some of us join cults; some of us try to please the spirits with sacrifices, whether of goats or greed; some of us go off the rails and hear voices; and some of us decide none of that’s worth it, so we stab ourselves in the neck.

I realized I don’t have to figure out the mystery of October 14 because every single day on this beautiful, too-quickly-vanishing earth is, in a sense, October 14. Something extraordinary is happening right now but we’ll only realize that when it’s too late. Everyone we love is in the process of leaving us, and one day they will be gone. We, too, will be gone.

The secret is to learn to look at everything in this world — and the fictitious ones created by our favorite writers — as if the magic of eternity was dancing all over it.

The moral of “The Leftovers” isn’t that nothing is holy. It’s that everything is.

(Brandon Ambrosino is a contributor to RNS)