The sun is seen through the steam and other emissions coming from funnels of the brown coal Loy Yang Power Station in the Latrobe Valley near Melbourne in this December 15, 2008 file photo. Photo courtesy of REUTERS/Mick Tsikas/Files

(RNS) As the United Nations’ 2015 Paris Climate Conference moves into its final days, faith voices have pushed to be sure their moral perspective has been heard at the summit, where officials of 195 nations are wrestling with plans to slow the ticking clock of global warming and other environmental crises.

For months — indeed, years — clergy and activists from every major religion have lifted concern about the health of the Earth to the heavens — and, this year, to the landmark Paris summit, also known as COP21. (That’s short for the 21st Conference of the Parties to the United Nations Framework Convention on Climate Change.)

This year’s conference, which ends Friday (Dec. 11), is crucial because the expected outcome is a new international agreement on climate change, to keep global warming below 2°C.

Religious activists’ efforts are powered by deep belief that a just society requires such a limit, that purely scientific facts alone will not be enough to inspire critical action.

Pope Francis may have the greatest global platform and he has not minced words.

This summer he issued his powerful encyclical, “Laudato Si’.” Timed to build up momentum for Paris, Francis’ teaching document branded climate change as “a global problem with grave implications” and one that requires a “bold cultural revolution” in mankind’s thinking.

During his U.S. visit in September, he told the United Nations, “Any harm done to the environment, therefore, is harm done to humanity.”

In his November Africa tour, he linked climate change to forced migration, human trafficking and slave labor. Then, on his return flight to Rome, he told media on the papal plane just how urgent the issue was: “We are at the limits. If I may use a strong word I would say that we are at the limits of suicide.”

With the talks underway now, Francis tried another attention-getting tactic — beauty. Tuesday night in Rome, St. Peter’s Basilica was illuminated by nature photographs in a mesmerizing slide projection show. It was shown on the Vatican Radio web site with the title “Our Common Home,” the subtitle of his encyclical.

Ecumenical Patriarch of the Orthodox Church Bartholomew, whom The Economist called “a veteran campaigner for the planet,” has worked closely with Francis.

Bartholomew’s representative at the launch of the encyclical, Metropolitan John (Zizioulas) of Pergamon, said its intent was to have a “worldwide effect on people’s consciousness.”

He later told RNS that disrespecting creation is disobeying God: “Therefore we must realize that it is a sin and we must add to the list of sins the ecological sin.”

A rundown of some of the other religious voices speaking out:

In the United States, mainline Protestants and evangelical Christians alike have been outspoken on the dangers of global warming and the disproportionate impact that climate change — with the threat of drought, floods, disease and hunger — has on the world’s poor.

Richard Cizik, former head of government affairs for the National Association of Evangelicals, turned to environmental activism in 2002, when he participated in an international climate forum in Oxford, England. Cizik also stresses concern for the poor.

“I’m always looking for ways to reframe issues, give the biblical point of view a different slant,” he once told NPR. “As a Christian, we can’t claim to love the Creator and abuse the world in which we live.” 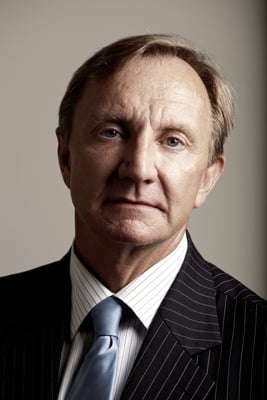 The Rev. Richard Cizik is president of the New Evangelical Partnership for the Common Good, one of many religious voices that have been speaking up in advance of the Paris climate conference. Photo courtesy NRCAT

Cizik’s current platform is the New Evangelical Partnership for the Common Good. It set out to mobilize “more than 1 million evangelicals and Catholics after making the case for climate change as an election issue.”

More than 70 evangelical, Protestant and Catholic leaders, including Cizik, met in August to call on 2016 presidential candidates to address climate change action during their campaigns. The group Faith in Public Life organized the event.

Cizik says he was brought to the cause by the Rev. Jim Ball. Ball, an American Baptist, was hot on global warming before the topic was cool with most Christians.

He founded “Creation Care, A Christian Environmental Quarterly,” and he also came up with a catchy gimmick. In 2002, Ball launched a “What Would Jesus Drive?” campaign, spinning off the “What would Jesus do?” slogans appearing on trinkets in Christian stores.

With Ball, a coalition of clergy from the National Council of Churches, the American Jewish Committee, the Serbian Orthodox Church and the Evangelical Lutheran Church in America, among others, put the pedal to the metal in Detroit. They personally called on major automakers to shift to “substantially greater fuel economy.”

In Ball’s view, “Pollution resulting in ill health and/or harm to the rest of creation is counter to Christ’s reconciliation of all things, and dependence on foreign oil from unstable regions heightens the prospect for armed conflict.”

Ball is now executive vice president for policy and the climate campaign for the Evangelical Environmental Network, which posts occasional updates from Paris. The network stresses “the Bible’s teaching on the responsibility of God’s people to ‘tend the garden’ through a faithful walk with our Lord Jesus Christ.”

Not every religious activist focused on the Paris talks has a famous name — yet. 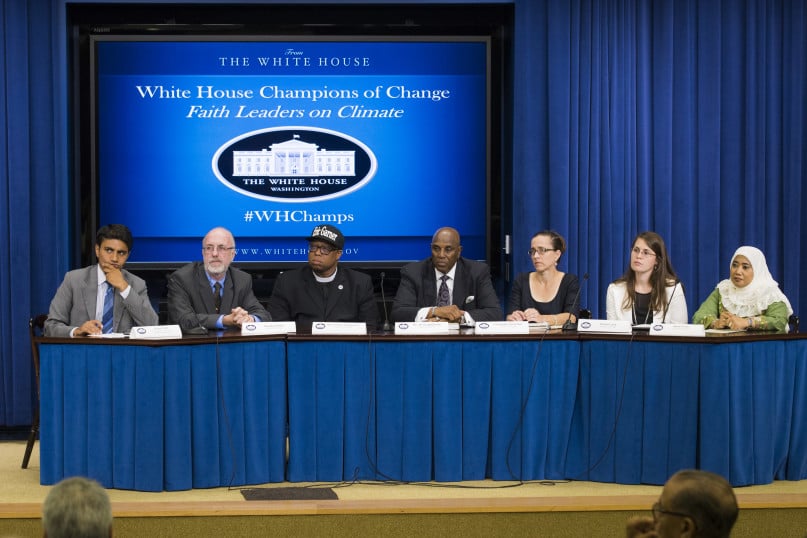 A panel at the White House Champions of Change event on July 20, 2015 featured,
left to right, Rohan Patel, special assistant to President Obama and panel moderator; Patrick Carolan of the Franciscan Action Network; the Rev. Lennox Yearwood Jr. of the Hip Hop Caucus; the Rev. Gerald Durley of Atlanta; Cassandra Carmichael of the National Religious Partnership for the Environment; Rachel Lamb of Young Evangelicals for Climate Action; Nana Firman of Our Voices. Photo by Eric Vance, EPA.

Environmental activist and Wheaton College graduate Rachel Lamb, national organizer and spokesperson for the Young Evangelicals for Climate Action, was named a White House Champion of Change in 2015.

YECA activists went to Paris this week to push for “a just and equitable climate agreement in Paris that will protect the earth, the poor, and future generations.”

And not every voice lifted for the Earth’s sake is Christian.

The council also sent representatives to Paris as part of a Religions for Peace USA interfaith delegation. Their plank calls for attention to stewardship, justice, sustainability and human dignity. “As Jews,” the council posits, they have “a moral obligation to champion the needs of the poor and vulnerable around the world.”

Rabbi Fred Scherlinder Dobb of the council ties it to the Jewish religious imperative “tikkun olam” — to heal the world.

In August, Muslim imams, scholars and scientists gathered for an international symposium that concluded by issuing an “Islamic Declaration on Global Climate Change.”

It directed specific recommendations to elected officials, clergy, corporations, financial agencies and the business sector to phase out greenhouse gases, commit to renewable energy, invest in a “green economy” and refocus their concerns from unethical profit from the environment, to that of preserving it and elevating the condition of the world’s poor.

The declaration also reminded Muslims of environmental messages in the Quran, such as “Do not strut arrogantly on the earth.”

While Mormons are not directly campaigning for action at the Paris talks, the Church of Jesus Christ of Latter-day Saints does address the environment as a matter of spiritual concern.

As the church’s website says: “The earth and all life upon it are much more than items to be consumed or conserved. God intends His creations to be aesthetically pleasing to enliven the mind and spirit, and some portions are to be preserved. Making the earth ugly offends Him.”