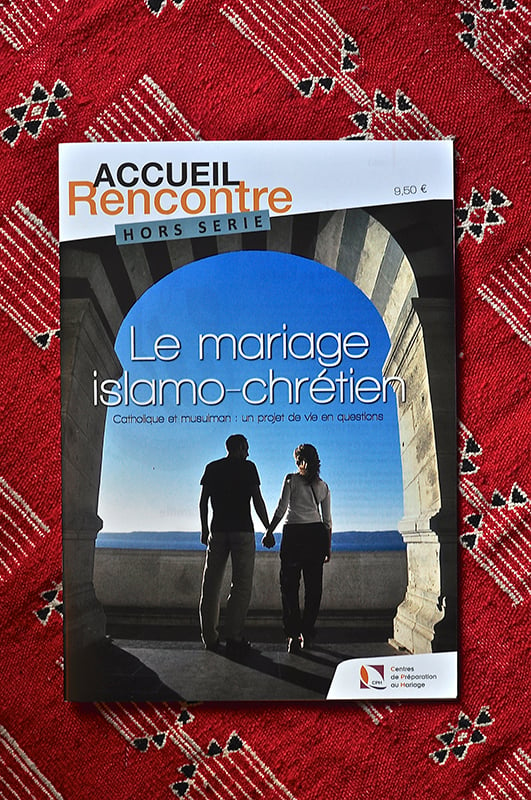 The cover of a French Catholic handbook for volunteers who prepare young couples for marriage. The headline says: “Islamic-Christian Marriage — Catholic and Muslim: questions about a project for life.” Religion News Service photo by Tom Heneghan

PARIS (RNS) A day after Islamic extremists massacred 130 people in Paris last month, a Muslim-Catholic couple married in Lyon. It had to be a civil ceremony because the Muslim family refused to enter a church. Shocked by the attacks, some relatives even asked whether they should go ahead with the ceremony at all.

But they did — and the two families cautiously made contact with each other. By the end of the reception, the ice was broken and the first of many hurdles cleared.

“I told the couple their love had made this possible,” said the Rev. Vincent Feroldi, the Catholic priest who helped prepare the marriage. “This is the best testimony one can give the day after these attacks. They showed this horror will not win.”

It wasn’t only the couple’s love that made this possible. Behind them was a loose network of Catholic and Muslim volunteer counselors who meet regularly to help young interfaith couples prepare for marriage problems most other French their age can hardly imagine.

The issues start with where to hold the wedding — in a church, a mosque, both or neither? — and who might not show up. Couples often imagine the priest and imam can co-celebrate, but the two faiths have very different concepts of marriage.

It gets even more complicated when the children come. Should they be brought up in one or both religions? Should boys be circumcised? What about giving first names like Mohammad or Christine?

The volunteer counselors have now published a 48-page handbook for other marriage counselors helping prepare young Muslims and Catholics not only for their wedding day, but also the predictable and unexpected problems they may face as they try to live together and raise a family while respecting both religious traditions.

“Our aim was to respond as closely as possible to the questions we get on our website and in our counseling sessions,” said Agathe Henniart, editor of the guidebook “Islamic-Christian Marriage — Catholic and Muslim: questions about a project for life.”

Henniart is general delegate for the Marriage Preparation Centers, a service of the Roman Catholic Church, which requires couples to take a class before marrying in a church. The centers network produced the guidebook in cooperation with the Group of Islamic-Christian Homes (GFIC), an association of mixed couples who meet to discuss issues their unusual marriages bring up.

READ: After attacks, Muslims in Paris fear being targeted anew

“GFIC started in 1977 and back then it was mostly binational couples who met as students or development aid workers abroad,” said Dominique Fonlupt, a Catholic journalist married to a Moroccan for the past 25 years. “Now both spouses are mostly French and that changes things. Now religious differences are more important than cultural ones.”

France’s 5 million-strong Muslim minority, made up mostly of families from Algeria, Morocco and Tunisia, is the largest in Europe. About two-thirds are French citizens, born, raised and educated in the traditionally Catholic country.

Nobody knows how many mixed couples there are in France because religion is not registered in official documents. There are probably a number of unions of secularized Catholics and Muslim that go unnoticed, as well as some where a Christian man goes through the motions of converting to Islam in order to marry a Muslim woman.

GFIC only deals with couples who contact it for advice on living with both religions; it is currently advising about 15 couples. Feroldi said there were 10 Muslim-Catholic marriages in Lyon last year.

READ: ‘Hands off my church’ petition plays on French worries about Islam

“Our society is mostly secularized, but deep down, France remains the ‘eldest daughter of the Church,’” wrote Bordeaux imam Tareq Oubrou in the guidebook. “Theology separates us, but our hope, our values and our morals unite us.”

Since Muslims sometimes refuse to attend a Christian ceremony, this legal necessity provides a neutral ground for both families to come together, the guidebook advises. Sounding out relatives in advance is crucial if the couple plans a religious ceremony in a church or a mosque.

“Many Muslim women want an imam to be there to assure their family they are not leaving the Muslim community,” Fonlupt said. Sometimes, it’s the imam who persuades the Muslim family to attend a ceremony in a church.

At the presentation of the guidebook this week in Paris, a mixed couple in their mid-30s, Lucie and Adel, told about the problems they faced.

“We didn’t talk about religion much at first. We’re both French,” said Adel, who was born in France to Algerian immigrants. “It wasn’t an issue until our first child came.”

Their child was a boy, Lucie said, so the first question was whether he would be circumcised according to Muslim custom, baptized as a Catholic or both. They chose both.

Then came the question of a name, which they wanted to work in Arabic, French and Spanish, since Lucie’s family is part Spanish. “It’s very hard, especially for boys. We finally chose names of prophets,” she said. They now have three boys: Daniel, Elias and Zachary.

They celebrate Christmas and Easter as well as both Eid holidays. Adel observes Ramadan. “You can belong to two religions. You can be religiously bilingual,” Lucie said, reflecting the fact they speak French and Arabic at home.

The Rev. Christian Delorme, a Lyon priest long active in Catholic-Muslim dialogue, said Vatican teaching said mixed couples should educate their children as Catholics, but in real life, raising them as both seemed to work out.

“The Catholic-Muslim couples who deal best with their religious differences are those who openly profess their religious adherence and have open and not rigorous approaches to their respective faiths,” he wrote in the guidebook.