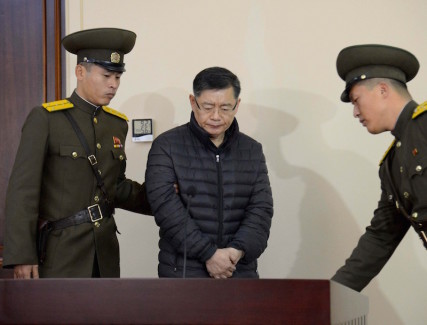 Hyeon Soo Lim, the head pastor at a Toronto church that is one of Canada’s largest, has been held by North Korea since February. He had appeared on North Korean state media earlier this year confessing to crimes against the state.

Lim admitted during the trial to “not only viciously defaming the highest dignity of Korea and its system but also possessing the wicked intention of trying to topple the Republic by staging an anti-state conspiracy,” KCNA said.

The court said Lim had attempted to overthrow the North Korean government and undermine its social system with “religious activities” for the past 18 years, China’s official Xinhua news agency reported.

The prosecution sought the death penalty, but the defence asked for leniency despite the gravity of his crimes “so that he can witness for himself the reality of the nation of the Sun as it grows in power and prosperity,” KCNA said.

The court sentenced him to hard labour for life, it said.

KCNA did not mention what specific activities Lim engaged in, but Xinhua reported that Lim confessed to helping people defect from North Korea, and had met the U.S. ambassador to Mongolia regarding the plans.

Most defectors fleeing isolated, repressive North Korea travel to South Korea via China and Southeast Asia. It is also possible to defect via Mongolia.

The court held that he fabricated anti-North Korean propaganda as part of a U.S. and South Korean-led “human rights racket” against the country, Xinhua said.

A church spokeswoman did not immediately respond to an emailed request for comment late on Tuesday in Canada.

The Associated Press showed images of Lim, wearing a padded winter jacket with his hands clasped together, being led to sentencing in Pyongyang on Wednesday by two security personnel.

North Korea has previously sentenced a Korean-American missionary Kenneth Bae to 15 years of hard labour but released him last year after holding him for two years.

In July, Lim appeared at a news conference in North Korea and confessed that he had travelled there on the pretext of humanitarian work and gathered information that he used in sermons outside the country to drive the regime to a collapse “with the love of God”.

His church, the 3,000-member Light Korean Presbyterian Church, has said Lim had visited the North more than 100 times since 1997 and had helped establish an orphanage and a nursing home there.

Lim has lived in Canada since 1986 and is a Canadian citizen.

His church said in March that Lim, who was 60 at the time, has “a very serious health problem, very high blood pressure, he’s on a prescription, and his family is anxious to send medicine”.

He is the only Western citizen known to be held currently in North Korea.

Both North Korea and neighbouring China have clamped down on Christian groups in recent years.

Last year, Pyongyang released three detained Americans, including Bae and another man who had left a copy of the Bible at a club. It freed a South Korean national with a U.S. green card in October this year after holding him for six months.

In June, the North’s highest court sentenced two South Koreans accused of spying for Seoul to hard labour for life. The pair are among three South Koreans known to held by the North.