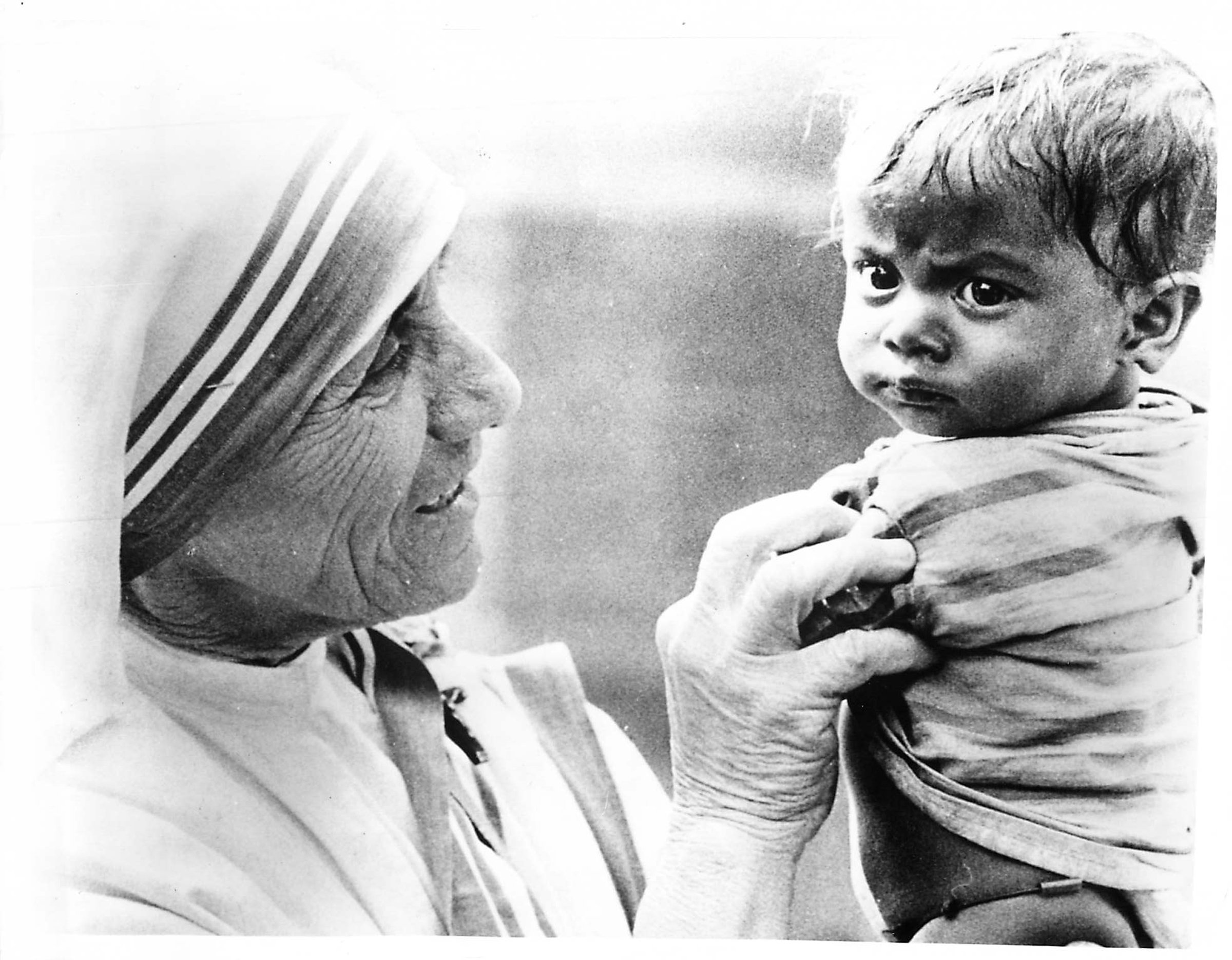 Mother Teresa of Calcutta, shown with an Indian child in 1977, worked to help sick and homeless victims in the cyclone-ravaged Indian state of Andhra Pradesh. She said her Missionaries of Charity nuns have "all the experience necessary to work in this disaster area because of previous efforts during floods." "In all these human tragedies, God is trying to teach us something. We are not able to understand Him," she said as she went about supervising the rescue operation. Religion News Service file photo
December 17, 2015
David Gibson 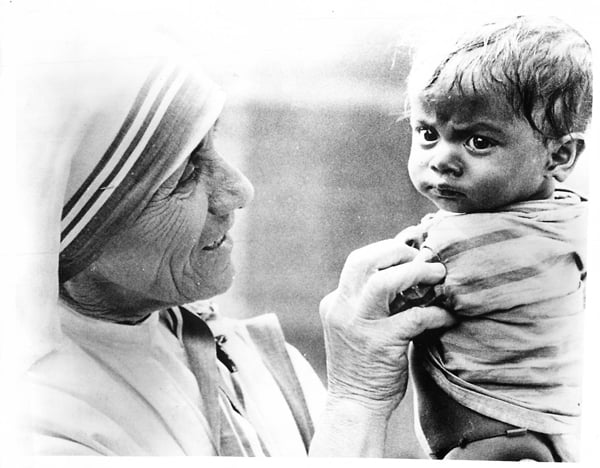 Mother Teresa of Calcutta, shown with an Indian child in 1977, worked to help sick and homeless victims in the cyclone-ravaged Indian state of Andhra Pradesh. She said her Missionaries of Charity nuns have "all the experience necessary to work in this disaster area because of previous efforts during floods." "In all these human tragedies, God is trying to teach us something. We are not able to understand Him," she said as she went about supervising the rescue operation. Religion News Service file photo

VATICAN CITY (RNS) Pope Francis has given final clearance for Mother Teresa -- called "the saint of the gutters" for her work with the poor in India -- to become an official saint, a move welcomed by the archbishop of Calcutta as “a real Christmas gift” from the pontiff.

Francis took the step by signing a decree declaring that the inexplicable 2008 recovery of a Brazilian man who suddenly woke from a coma caused by a viral brain infection was due to the intercession of the Albanian nun, who died in 1997.

The Rev. Brian Kolodiejchuk, the postulator spearheading Mother Teresa's canonization case, said in a statement Friday (Dec. 18) that the man fully recovered following his wife’s prayers and he has since returned to work as a mechanical engineer. The couple also have had two children.

News of the pope's approval, confirmed Friday by the Vatican, was first reported late Thursday by the newspaper of the Italian bishops' conference, Avvenire.

It noted that the pontiff's action came three days after a Vatican panel of cardinals and bishops affirmed the judgment of medical experts and theologians who concluded that there was no medical explanation for the apparent cure.

Church observers said the pope would probably canonize Mother Teresa next year on Sunday, Sept. 4, the day before the anniversary of her death. The official feast day for Mother Teresa is Sept. 5.

Archbishop Thomas D’Souza of Calcutta, where Mother Teresa's ministry and order, the Missionaries of Charity, are based, described the approval of the miracle as “a real Christmas gift that the Holy Father has given.”

“We were waiting for this moment, since many years really, and now that it has come we are very happy, overjoyed,” he told Vatican Radio.

Mother Teresa, a Nobel Peace Prize laureate who was famous for her work with the poorest of the poor in India, had been beatified -- the penultimate step before sainthood -- in 2003 by St. John Paul II after the attribution of another miracle healing to her intercession.

Catholic Church protocols for sainthood generally require evidence that a person lived a virtuous and holy life and that two miracles can be attributed to the sainthood candidate's intercession with God. Catholics who were martyred for the faith can be declared saints with evidence of just one miracle.

Francis has often bypassed the usual norms to declare someone a saint, which means that the church officially declares that someone is in heaven and worthy of veneration as a model of sanctity by the faithful on Earth.

Francis has made outreach to the poor a priority for the Catholic Church, and years ago when he was a bishop in Argentina he met Mother Teresa and admired her ministry but also her fearlessness in speaking out on behalf of society's outcasts.

"I would have been afraid to have had her as my superior, since she was so tough," he once joked.

Mother Teresa was born Agnes Gonxha Bojaxhiu on Aug. 26, 1910, into an ethnic Albanian family in what is today the Republic of Macedonia.

She joined the Loreto order of nuns in 1928 and in 1946, while traveling by train from Calcutta to Darjeeling, was inspired to found the Missionaries of Charity order.

The order was established four years later and has since opened more than 130 houses worldwide to provide comfort and care for the needy.

Mother Teresa was awarded the Nobel Peace Prize in 1979.

But despite global acclaim she was the frequent target of criticism from the left and from atheists who ridiculed her for working with the poor while also supporting Catholic teaching against abortion and contraception, which they said fostered poverty by encouraging population growth.

Controversy of a different sort erupted in 2007 when a book revealed letters in which Mother Teresa confessed to a long struggle over a loss of the sense of God's presence.

Writing in The New York Times, the Rev. James Martin, a Jesuit priest and expert on sainthood, said that Mother Teresa's experience was almost "unparalleled" in the lives of the saints. But he said that the way she used her struggle -- connecting it to the abandonment that Jesus felt on the cross and that the poor feel in society -- was central to her legacy:

"Mother Teresa’s ministry with the poor won her the Nobel Prize and the admiration of a believing world," Martin wrote. "Her ministry to a doubting modern world may have just begun."