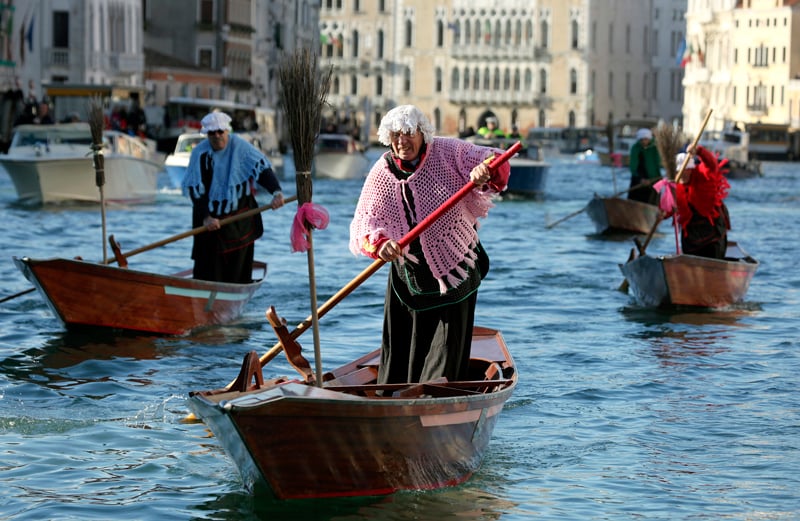 Men dressed as “La Befana,” an imaginary old woman who is thought to bring gifts to children during the festival of Epiphany, row boats down the Grand Canal in Venice on Jan. 6, 2012. The orthodox Christian holiday of Epiphany is observed as the date when the Magi visited the baby Jesus. Photo courtesy of Reuters/Manuel Silvestri
*Editors: This photo may only be republished with RNS-EPIPHANY-BEFANA, originally transmitted on Jan. 5, 2016.

ROME (RNS) Pope Francis and Catholics around the world will celebrate the Feast of the Epiphany on Wednesday (Jan. 6), marking the date the three kings are believed to have visited the baby Jesus.

But across Italy on Tuesday, children will search their shoes for gifts from the good witch.

While the Western church focuses on the gospel story of the three kings or Magi bringing gold, frankincense and myrrh to the baby Jesus, and Orthodox churches celebrate his baptism in the River Jordan, a different tradition is marked outside the Vatican walls.

Italian children will rush to see if “La Befana,” the good witch, has visited and filled their shoes with candy and presents. According to the Italian tradition, the benevolent old woman, riding a broomstick, leaves gifts for well-behaved children on the night of Jan. 5.

Naughty children can expect a lump of coal, though “these days it’s a sweet,” said Mario Ramelli, a flower seller in Rome, describing the dark-colored candies.

Perhaps due to a corruption investigation of its traditional stalls, La Befana was nowhere to be seen Tuesday in the city’s famous Piazza Navona market.

Across Europe, Epiphany traditions vary. In Spain, “Dia de los Reyes Magos” (“Three Kings’ Day”) is marked by parades across the country and — in a custom akin to the one in Italy — children leave shoes out for gifts from the Magi.

In Poland, parades led by the three kings also see the appearance of Herod and the devil, while Poles bless a piece of chalk and mark the year and “K+M+B” over their door. The letters are based on Latin and stand for “May Christ bless this house.”

Comparable traditions are enjoyed across the Catholic world, with Epiphany festivities as far and wide as Latin America and the Philippines.

The tradition of La Befana may predate Christianity, though it has adapted to Christian culture. The name may be a derivative of Bastrina, after the Sabine/Roman goddess named Strina. But others maintain it derives from the word “epiphany,” and they hold that the Magi stopped by La Befana’s home on their way to visit Jesus.

According to legend, the Magi invited her to come along on their journey, but she declined, saying she had too much housework to do. After they left she changed her mind. But it was too late. She couldn’t find them, and she never found her way to the baby Jesus.