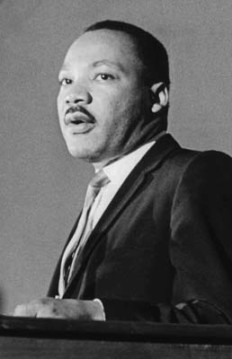 So it’s MLK Day, and all over the country it’s a “day of service.” Which, after all, is what Martin Luther King, Jr. was all about. Right?

Well, actually, no. The murdered black Baptist minister who is honored with a national holiday on the third Monday of each year did not give up his life for “service.”

He gave up his life for God.

He gave up his life for the liberation of his people.

And he gave up his life for a kingdom-of-God vision of social transformation, focused especially on ending what he called the “triple evils” of racism, poverty, and militarism.

Martin Luther KIng, Jr., was the primary leader of a deeply countercultural and deeply unpopular movement of nonviolent social change in 1950s-1960s America. His roots were sunk deep in the black Christian tradition — that part of it, anyway, in which the church and its leaders stood as the primary political representatives of the legitimate demands of African-Americans for human dignity and full citizenship rights in racist and discriminatory America.

He joined in midstream the many other currents of black activism that ever since Reconstruction had pressed this nation to move from a society of separate-but-unequal to integrated-and-equal. He decided, along with others, that an in-your-face nonviolent civil disobedience strategy was needed, to complement legal advocacy and defense efforts. White Americans were not going to give up their position of privilege without pressure. Their comfortable lives were going to have to be disrupted by black people protesting in the streets.

But because Dr. King was committed both in principle and strategically to a completely nonviolent campaign, he and those he led were physically defenseless when they went into the streets of white-dominated America. They knew this. They drew inspiration from Jesus, whose ministry can also be viewed as a prophetic nonviolent campaign in the teeth of the violent powers and authorities of his own day.

What happens to people who go into the streets to challenge injustice aggressively, publicly, and nonviolently? They get beat up. They get arrested. They get killed. It has happened over and over again in history.

At the time Dr. King was murdered on April 4, 1968, he was a deeply polarizing and unpopular figure. A minority lauded him as a hero, but to others he was a troublemaker and a rabble-rouser. People actually did cheer in many places in the US when the news broke that Dr. King was dead.

But people who are about service, dreams, and a color-blind America don’t get beat up, arrested, and murdered.

People who directly and aggressively challenge white America’s racism, and while they are at it challenge our complacency about poverty, and (in 1967!) challenge the morality of the Vietnam War, such people might just get beat up, arrested, and murdered.

Jesus noted that we honor our prophets only after we kill them. It salves our guilty consciences to at least build nice tombs for those we murder.

But it is kind of a cruel trick to “honor” these prophets through a selective memory of what they actually said and did. Making Dr. King a safe hero, kind to children and small animals, a nice man who teaches us about service and having a dream, does not honor him at all.