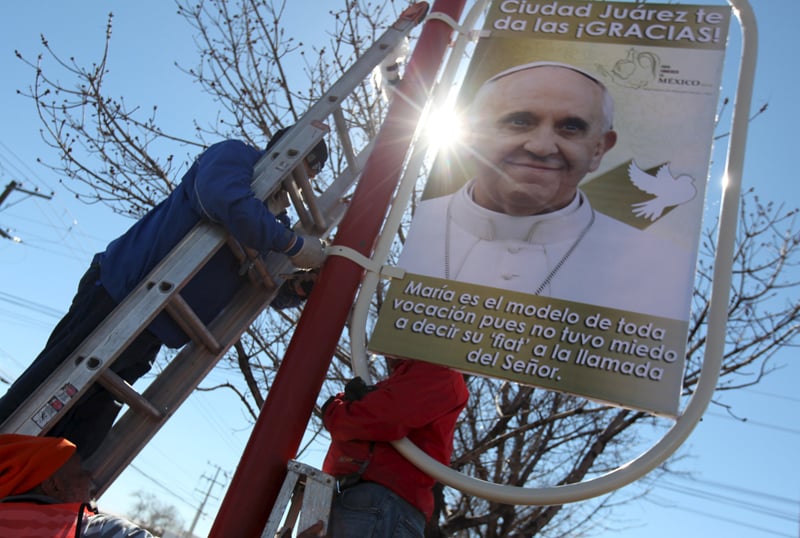 Workers put up a poster with an image of Pope Francis along a street at the border with the U.S. in Ciudad Juarez, Mexico, on Feb. 6, 2016. Photo courtesy of REUTERS/Jose Luis Gonzalez
*Editors: This photo may only be republished with RNS-POPE-MEXICO, originally transmitted on Feb. 10, 2016.

VATICAN CITY (RNS) Pope Francis’ nearly weeklong tour of Mexico will see the pontiff raise key themes of his papacy as well as issues related to tense national politics in Mexico and even the U.S. presidential race.

The papal plane is set to depart Rome shortly after sunrise on Friday (Feb. 12), earlier than expected because of the surprise stopover in Cuba announced last week.

The touchdown in Havana is for a meeting with Patriarch Kirill, head of the Russian Orthodox Church, a potentially groundbreaking step toward healing ties between Eastern and Western Christianity that were broken nearly 1,000 years ago.

After little more than three hours in Cuba for the historic talks, Francis will continue his journey to Mexico City for a whistle-stop tour that will include celebrating Mass at the U.S. border.

One of the highlights will be a visit on Saturday to the Basilica of Our Lady of Guadalupe, the shrine to the Virgin Mary in the Mexican capital and arguably the beating heart of Mexican Catholicism.

Francis had first thought of visiting Mexico en route to the U.S. in September but told reporters last year it would have been a “slap (in the face)” to arrange a brief visit without going to the basilica in Mexico City.

Otherwise, the pope’s carefully crafted itinerary follows his wish to speak first to those on the margins. That’s why he will fly to the southern state of Chiapas to meet with the indigenous community and will also meet with young people in Morelia, in central Mexico, as well as patients at a children’s hospital in the capital. 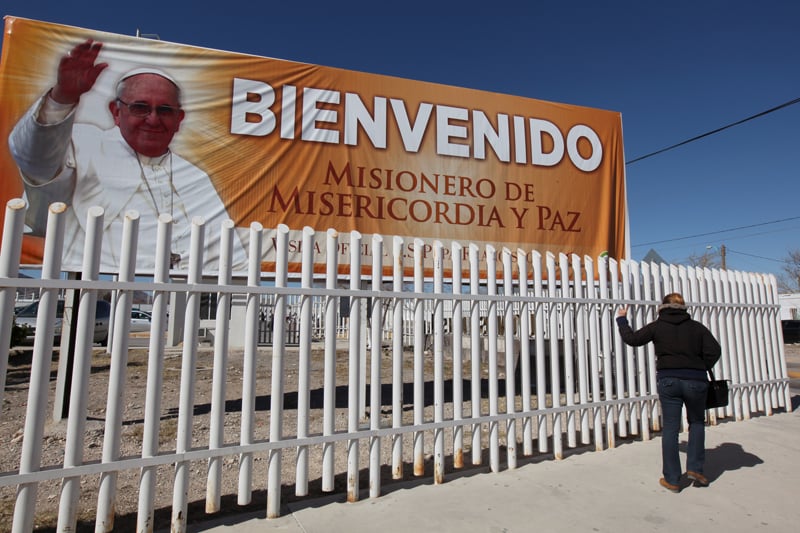 A woman gestures as she walks by a billboard promoting the upcoming visit of Pope Francis, outside the Cereso 3 prison in Ciudad Juarez, Mexico, on Feb. 5, 2016. Photo courtesy of REUTERS/Jose Luis Gonzalez
*Editors: This photo may only be republished with RNS-POPE-MEXICO, originally transmitted on Feb. 10, 2016.

As is customary on papal tours, a courtesy meeting with the president is also on the agenda. The pope’s appointment with President Enrique Peña Nieto will come just days after claims were made that the Catholic Church in Mexico allegedly fast-tracked a marriage annulment for Angelica Rivera, the politician’s partner, so that the two could wed.

But the pontiff’s impact on the political scene will more likely come with his visit to Ciudad Juarez on the border with Texas, a regular crossing point for immigrants.

“His Mass at the border is for me the highlight of the trip, because his concern for migrants, refugees and undocumented persons has marked his papacy from the beginning,” said the Rev. Kevin O’Brien, vice president for mission and ministry at Georgetown University.

Yet many candidates in the U.S. presidential campaign, especially on the Republican side, take a much different view of immigrants than does the pope, with some candidates proposing sharp restrictions or the building of a more extensive border wall.

Leading GOP candidate Donald Trump has been one of the most outspoken opponents of immigration, and late Thursday in an interview on Fox News he blasted Francis as a “very political person” for visiting the border area.

“I think that he doesn’t understand the problems our country has. I don’t think he understands the danger of the open border that we have with Mexico,” Trump said in a telephone interview. “Mexico got him to do it because Mexico wants to keep the border just the way it is because they’re making a fortune and we’re losing.”

The pope’s Mass in the border city, where he will also meet workers and visit a prison, “will be extremely powerful” and could affect American politics, according to O’Brien.

“There are Catholics (in the U.S.) who are voting and I hope they listen to what the pope says in Juarez,” he said.

Although the Juarez visit will be hugely significant, Andrew Chesnut, a professor of religion studies at Virginia Commonwealth University, said other parts of the trip should not be overlooked.

“The linchpin (of the tour is) in the southernmost bit of Chiapas,” he said, which will draw attention to the plight of people in Mexico’s poorest state.

Francis’ journey to Morelia, Chesnut noted, will come a year after he named Archbishop Alberto Suárez Inda a cardinal. The prelate is known for working for peace in a diocese hit by Mexico’s brutal drug war, which has claimed an estimated 100,000 lives nationwide in the past decade.

In a reminder of how violence reaches every corner of Mexican society, a battle between rival drug cartels in a prison near Monterrey left 52 people dead on Thursday, a day before the pope arrived.

Wherever the political fallout from the papal trip lies, Sister Norma Pimentel, executive director of Catholic Charities of the Rio Grande Valley, said all of Mexico is eagerly awaiting the pope’s arrival.

“His presence will bring out the best of us; Mexico’s excited and all people in Mexico are rejoicing for his presence,” said Pimentel, who will be on the border for the papal Mass. “I think that it’s a great moment of love and excitement, just by the fact that he’s coming.”