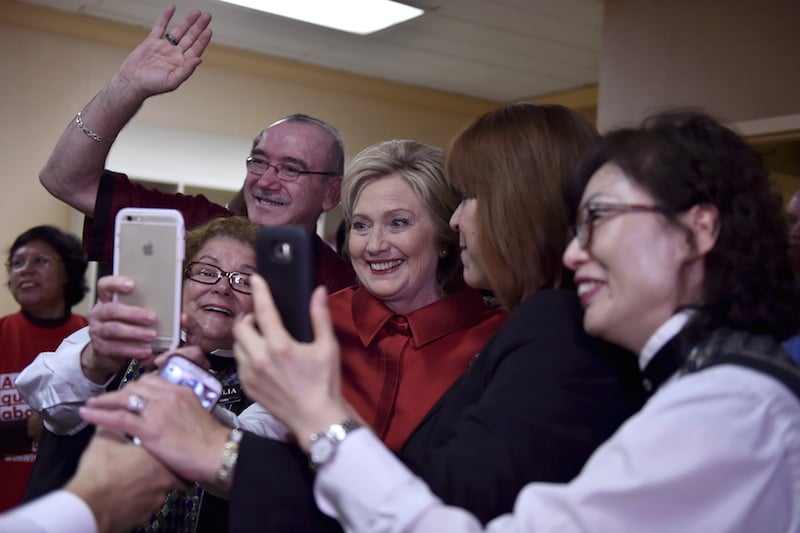 (RNS) The South Carolina GOP primary, where Donald Trump was quickly projected as the winner less than 30 minutes after the polls closed,  and the Nevada caucus, where Hillary Clinton was victorious, could signal another shake up the 2016 presidential race.

And the mix of candidates' religious beliefs -- or lack of them -- in these states may well have been a factor in the results, along with age, race, gender and ethnicity. Exit polls cited by MSNBC said that three in four S.C. voters are evangelical but they did not vote in a bloc for the most overtly evangelical candidate. Many preferred Trump's tough talk on terrorism, top issue in the primary according an Associated Press poll.

In the days leading up to the South Carolina vote on Saturday (Feb. 20) there was a go-round between Donald Trump and Pope Francis over whether Trumps' views of migrants are "Christian." (Both soft-peddled the exchange within 24 hours).

And while Sen.Ted Cruz and Sen. Marco Rubio brawled to a virtual tie for second place in South Carolina, former Fla. governor Jeb Bush lowered the flag. Bush came to the podium Saturday night and conceded not only the election but the race as well "to my competitors who remain on the island."

Here are 5 faith facts about the two states where there are still votes to come later this week. Democrats in South Carolina vote on Saturday, Feb. 27. Republicans in Nevada choose their candidate on Feb. 23.  (Follow the 5 Faith Facts series as the race runs through this contentious primary season.)

Although the religious mix in the state is changing, the faith vote is significant. Even Vermont Sen. Bernie Sanders, an irreligious Jew, bowed his head while attending a prayer breakfast organized by African-American faith leaders in Columbia, S.C., on Tuesday (Feb. 16).

The share of South Carolinians who identify as white and Christian dropped 16 percentage points, to 50 percent, between 2007 and 2015, according to Public Religion Research Institute.

White evangelical Protestants -- the group that was expected to favor son-of-a-pastor Sen. Ted Cruz -- took the strongest hit, declining 10 percentage points. Still, at 26 percent in 2015, this remains the largest single grouping based on religious self-identification.

White mainline Protestants (like Donald Trump, Ohio Gov. John Kasich and former Secretary of State Hillary Clinton) are now at 16 percent, down from 22 percent in 2007.

Two groups that have traditionally been sources of strength for Democrats have shown increases.

Black Protestants (Ben Carson, a Seventh-day Adventist, may be an exception to the leaning-left majority) are now the state’s second-largest religious group at 19 percent, up slightly from 17 percent in 2007. And South Carolina has a significant number of "nones" -- people who claim no religious identity. They're now 17 percent, up from 10 percent in 2007, according to PRRI.

People with no religious identity, the so-called nones, make up a whopping 30 percent of Nevada residents, up from 22 percent in 2007, according to PRRI. And many in this group, including many Millennials, warmed to Sanders. He also drew well among Hispanic voters. However, Clinton's appeal to women, African-Americans, and older voters, all known to be more religious, nudged her to the winners column.

White mainline Protestants are only 13 percent in Nevada.

Meanwhile, evangelicals remain at 10 percent, unchanged in eight years. Catholics also held steady, at 12 percent, between the 2007 race and the 2015 start of the 2016 campaign.

The two groups showing the biggest declines in religious market share were Mormons (down to 6 percent from 11 percent) and Hispanic Catholics (down to 9 percent from 13 percent.)

3. Religion continues to impact issues in the news.

Consider the hubbub over whether President Obama should nominate a replacement for Supreme Court Justice Antonin Scalia, who died suddenly on Feb. 13. It was a hot topic at the GOP debate hours after Scalia's death was announced.

Obama says he'll put forward a name. Both Democrats say he should do so, but the GOP candidates uniformly say they don't want anyone nominated or confirmed until after a new president is sworn in.

The candidates' response to any prospective justice may be shaped by the nominee's religion as well as his or her political ideology and legal views. And candidates' own religious beliefs might influence their preferences -- or objections -- to a nominee. Evangelical Christians, for example, may favor a justice who interprets the Constitution strictly by its word-for-word meaning, just as they take the Bible literally rather than viewing the text in the context of contemporary times.

There are no Protestants on the high court now. Scalia was Catholic, as are five other justices (the remaining three are Jewish). How important is it to reflect the nation where Protestants, while shrinking in numbers, are still a dominant force in the culture? Look for the issue to begin shaping the dynamics of the presidential primaries.

Expect victory -- or concession -- speeches in South Carolina and Nevada to have tweet-able mentions of the Almighty. After New Hampshire, Trump said this:

.@realDonaldTrump on #NHPrimary win:
“I am going to be the greatest jobs president that God ever created -- remember that.”

Clinton, in her New Hampshire concession speech, went with a more traditional reaction:

.@HillaryClinton #NHPrimary: Faith, family taught me credo: "Do all the good you can in all the ways you can for all the people you can.”

But not all references after the Granite State primary were overtly religious. Sanders left out God but still made a moral plea in his victory speech:

.@BernieSanders: “We have a moral responsibility” to work with countries to move away from fossil fuels to sustainable energy. #NHPrimary

READ: Who would Jesus vote for? Maybe Bernie (COMMENTARY)

5. Super Tuesday could change it all. 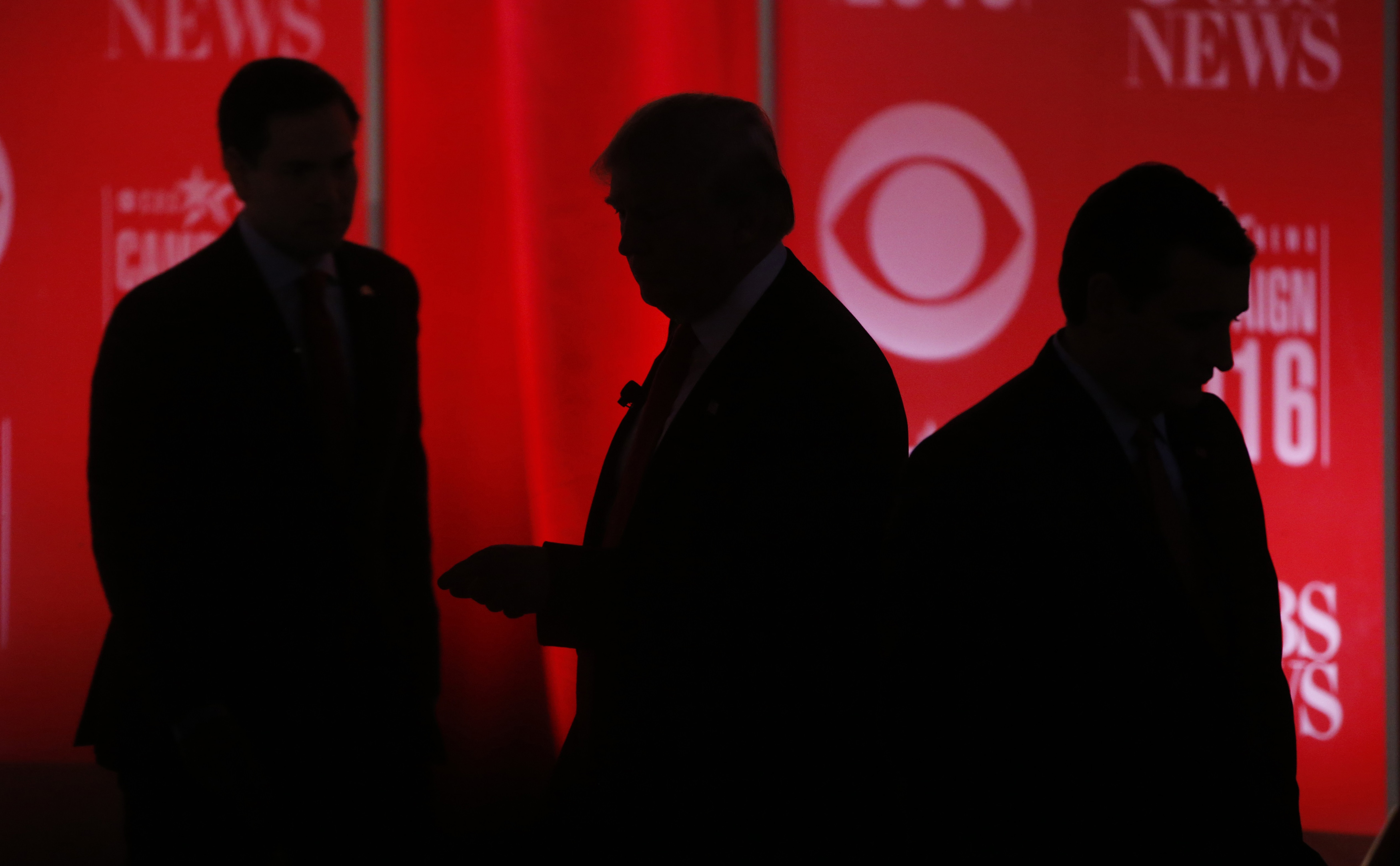 National religious trends will matter more when 14 primaries or caucuses are held March 1 for one or both parties.

Folks will choose their candidates in states from the Bible Belt to one of the nation's least religious states, Sanders' home base of Vermont. (Voting opens March 1 through 8 for Democrats living abroad.)

And this is just the start of America's political version of basketball's March Madness -- there will be more than two dozen more primaries and caucuses before April.

This is when the relative clout of conservative Christians -- evangelical or Catholic -- will be matched up with the rising power of the nones, whose values are not tethered to any particular theology or religious institutions.

Related Posts
By Emily McFarlan Miller, Jack Jenkins
Jerry Falwell Jr. taking indefinite leave of absence from Liberty University amid calls to step down
By Thomas Reese
Catholic bishops reprimand Trump as often as they praise him
By Jim Wallis
Reopening schools for all the wrong reasons
By Julie Ingersoll
Behind Trump's push to reopen schools, a gift for Bible-based education
By Adelle M. Banks
Promise Keepers stages a comeback on screens instead of in a stadium