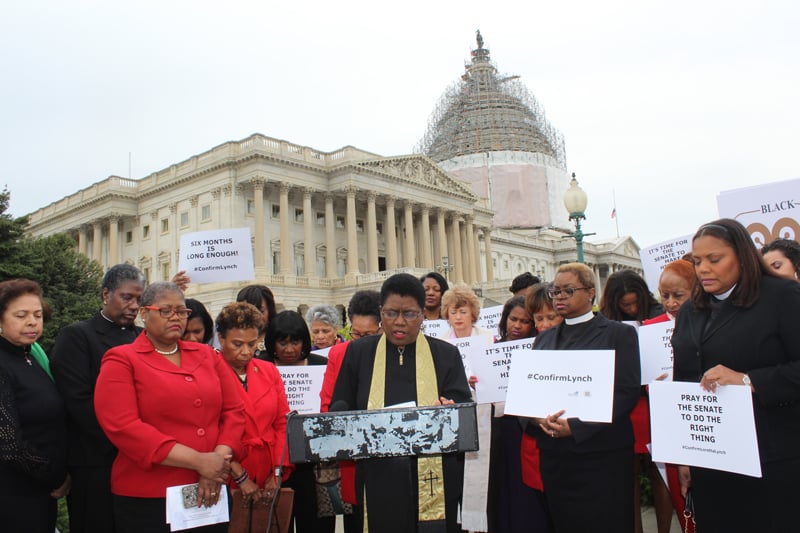 The Rev. Barbara Williams-Skinner, co-chair of the National African-American Clergy Network, leads a “pray-in” on April 15, 2015 of women urging the Senate to confirm U.S. Attorney Loretta Lynch as the next attorney general. The Rev. Leah Daughtry, immediately to the right of Williams-Skinner, offered one of the prayers. Religion News Service photo by Adelle M. Banks
March 4, 2016
Adelle M. Banks

The Rev. Barbara Williams-Skinner, co-chair of the National African-American Clergy Network, leads a “pray-in” on April 15, 2015 of women urging the Senate to confirm U.S. Attorney Loretta Lynch as the next attorney general. The Rev. Leah Daughtry, immediately to the right of Williams-Skinner, offered one of the prayers. Religion News Service photo by Adelle M. Banks

(RNS) Black clergy from across the country are expressing outrage about the Republican-led Senate’s vow to block any nominee President Obama picks to fill a vacancy on the Supreme Court, saying it reflects racism and disrespect.

The Rev. Freddy Haynes of Dallas said on Friday (March 4) that Senate Republicans have condemned statements about racism by the leading GOP presidential candidate Donald Trump but he said they need to act on those words.

“I’m saying to the Senate: before you denounce the splinter of racism blatantly espoused by a certain candidate, I need you to check the log of obstruction and racism that is in your eye,” the megachurch pastor said. “We declare the president’s right and responsibility, constitutionally, to appoint a Supreme Court nominee that goes through a just and fair practice.”

The National African American Clergy Network held the Friday conference call to express its outrage about the nomination process. On Feb. 22, coalition members issued a letter and video urging the GOP-controlled Senate to consider Obama’s nominee. They said they received no response.

The Rev. Barbara Williams-Skinner, the network’s co-chair, said the group is asking the Senate “to do nothing special for President Obama. Just do your job. Just do what the Constitution says and that is to hear the nominee and to vote on the nominee.”

Obama is reportedly considering a number of potential candidates for the vacancy and says he plans to name one of them despite Republican demands that he wait until a new president is in office after the November election.

The clergy leaders hope African-American voters will contact their senators and consider their treatment of the nomination process when they vote in upcoming primaries and the general election.

Some of the 300 pastors who prayed at Supreme Court today! #power300 pic.twitter.com/2FsxjKRpsF