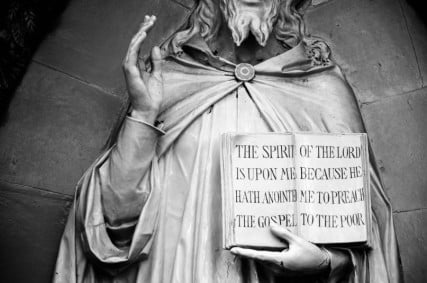 A statue of Jesus holding the message, “The spirit of the Lord is upon me because he hath anointed me to preach the gospel to the poor.

Governor Nathan Deal, a reliably conservative Republican, cited Jesus last week to cast doubt on the wisdom of broadly worded “religious liberty” legislation that has passed Georgia’s legislature and awaits his action. His stunning words might signal that the anti-gay fever that has swept conservative Christian America, especially in the wake of the 2015 Supreme Court gay marriage decision, could be about to break.

Let that sink in for a minute while I tell you about our sad plight here in the Southland.

It is not easy being a progressive evangelical Christian in the Deep South. Most days it seems like the ultimate lost cause. All around us are Christians who think that their faith in Jesus quite obviously yields a politics that is pro-gun, pro-death penalty, and anti-gay. Our co-religionists mainly support either Ted Cruz because he’s a down-the-line conservative or Donald Trump because…well, let’s not go there this time.

Georgia is one such state. I live here, traveling back and forth between Mercer University’s Atlanta campus in the north and Macon campus in the south.

Georgia is one of the reddest of red states. All branches of our government, at least outside urban Atlanta, are dominated by conservative white Republicans. Gun legislation is advancing aggressively here. Our governor rejected Medicaid expansion under Obamacare. We have been accelerating executions in a time when most states are backing away from the death penalty. Any conservative policy guru seems to have a direct line from his laptop to the state legislature.

Georgia’s HB 757 fits the package. It has been described as “religious freedom on steroids.” As drafted, it permits not just religious institutions but “any organization whose governing documents or mission statement expressly acknowledges a religious belief or purpose” the right to discriminate on the basis of religious convictions. Of course the bill’s defenders say it is narrowly drawn to protect the legitimate religious liberties of Georgians. Its critics have argued that it is a blatant license for just about any individual or business to discriminate on any number of religious grounds, and that it will do damage to the business interests of the state.

Governor Deal, a Baptist who studied at Mercer, appears to have sided with the critics. And what’s interesting is that in his apparently off-the-cuff remarks last week, he went right at the religious motivations that dominate the legislation. It wasn’t just about business losses. It was about Jesus. This is what the governor said:

What the New Testament teaches us is that Jesus reached out to those who were considered the outcasts, the ones who did not conform to the religious societies’ view of the world…We do not have a belief, in my way of looking at religion, that says we have to discriminate against anybody. If you were to apply those standards to the teachings of Jesus, I don’t think they fit.

Governor Deal went on to cite the famous story of the woman caught in adultery (John 8), grounding an emphasis on forgiveness and non-discrimination on that text in which Jesus protects a woman about to be stoned to death by a crowd of men inflamed by religious self-righteousness. The governor concluded by saying that he needed to see legislation that would “protect fundamental religious beliefs” but not “discriminate against other people.” He indicated that he felt no pressing need for any such legislation in the first place.

Jesus showed up in Georgia, his words and his spirit reflected for a moment by the words of our governor.

Jesus is dangerous that way. He can show up in the most untimely ways, throwing up roadblocks in front of those who claim his name but do not reflect his spirit.

It makes perfect sense to discriminate against all kinds of people in the name of God; that is, from a certain narrow kind of religious perspective inflamed by readings of certain biblical texts. It makes far less sense if the texts held central are the ones about Jesus himself, the ultimate antidote for Christian self-righteousness, the one who said “He who is without sin among you may cast the first stone.” That kind of Christianity becomes a force that opens one up to the humanity of others and the grace of God to all.