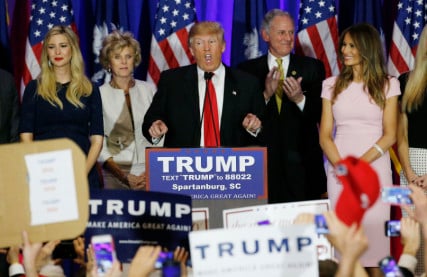 Many observers are wondering how exactly Donald Trump is winning so much “evangelical” Christian support. Leaving aside definitional quibbles about the meaning of the term “evangelical,” why is this uber-worldly candidate doing so well among these and so many other Christians?

I found my answer while watching Mr. Trump’s bizarre QVC/Trump Steak/Trump Vodka/Trump Doral news conference after his victories Tuesday night. I caught a glimpse of why so many Christians like Trump. My thesis: They like him just as they like the “evangelical” Protestant preachers that in some ways he resembles. They like him because he connects with the religious and cultural trends that these preachers represent.

Intending no comprehensive comparison between Mr. Trump and the preachers I shall now name, here are a few points of resemblance:

(1) Donald Trump resembles health-and-wealth, prosperity gospel preachers like Creflo Dollar. This version of the Christian Gospel proclaims that Jesus intends his true followers to be healthy, wealthy, and successful. The preacher in such churches models the message by personally overflowing with health, wealth, and success. “You too can be like me if you believe like me — and if you support me.” Mr. Trump offers a kind of national prosperity gospel to a people he diagnoses as hungry for such a message.

(2) Donald Trump resembles those who create and lead branded, multi-site, personality-driven megachurches or church networks, like Andy Stanley, Rick Warren, and Bill Hybels. Trump reminds me of these pastors in their independence, fearlessness, and enormous skill at creating and marketing a brand around themselves and their vision. Trump is himself a brand creator who does not answer to anyone else and has been cultivating and advancing his brand for decades.

(3) Donald Trump resembles preacher-evangelist-showmen of various eras, like Billy Sunday and Billy Graham. His rallies are more like football games than lectures or policy talks. In this he resembles every evangelist or pastor who has managed to create a worship experience that by the standards of the time is dazzling, inspiring, and fun, a great show with the coolest music and a thrilling central personality.

(4) Donald Trump resembles evangelical pastor Mark Driscoll and other leaders like him, in that he is an authoritative hyper-macho guy who just might say something off-color or “politically incorrect” — and who is fun (from a certain perspective) precisely because of that possibility. The authentic, uncensored, swearing Christian leader is in right now, and they are not all male — consider the popularity of Nadia Bolz-Weber in Denver. This may help explain why someone like Donald Trump can outmuscle the more puritanical and pious Ted Cruz for many evangelical voters. The younger crowd is especially receptive, and maybe even attracted by a few obscenities.

Without naming names any further, I can say that Donald Trump resembles many preachers in appealing to to an anti-intellectual and anti-elite strand of American (Christian) life. He seems to be a straight talker who doesn’t even bother to write speeches. In this way he resembles many preachers who do not write sermons but simply “speak from the heart.” I notice, by the way, that a higher and higher percentage of books on religion that one finds at the major bookstores are written by people who do not have significant academic training. Celebrity authors now trump scholars of religion — maybe like celebrity candidates now trump experienced government leaders.

It may be precisely because Donald Trump hasn’t gone to Harvard Law School — and doesn’t know what the nuclear triad is — and hasn’t been a governor — and doesn’t speak in modulated NPR voice — that he appeals to those who are tired of being told what to think by college professors and experts. Every time he smashes one of these elite figures into smithereens he wins points.

Donald Trump also connects with a very heterosexual/male kind of authoritarianism in American Christianity. The dominating, take-charge, charismatic male pastor figure (usually accompanied by the requisite beautiful wife) is a staple in many Christian traditions, and there is no question that Trump connects to many at that level.

Strength. Charisma. Manliness. Independence. Toughness. Celebrity. Prosperity. Power. Success. Personality. Showmanship. Like many of today’s most successful preachers, this is what Donald Trump is presenting to voters. It looks like he will win the Republican nomination with it.

The fact that he has demonstrated a kind of temperament, and said a number of particular things, that should have immediately disqualified him from consideration for the presidency is, of course, not a small problem.

Posted in
Beliefs Culture David Gushee: Christians, Conflict and Change Ethics Institutions Opinion Politics
Support RNS and get your donation doubled
Get the RNS spiritual guide to the 2020 election

News
‘Well known pastor’ arrested on flight not a pastor, says Charlotte church
Opinion
Our church suspended in-person worship until 2021. This one question sealed the deal
News
New book links the decline of religious authority to the end of empathy
News
In Oregon, churches and anti-fascists unite to provide mutual aid to fire evacuees and others in need
News
John MacArthur believes the Bible trumps COVID-19 public health orders. Legal scholars say no