(RNS) The end is nigh! The apocalypse is coming, riding on the four elephants of the false Republican god, Donald Trump.

Indeed, to hear the anti-Trump choir, you’d think the end days will arrive amid beasts and fire should he get elected. And the clamor will only grow, with Trump’s primary and caucus victories Tuesday (March 8) in Michigan, Mississippi and Hawaii.

Does it not say in the Book of Daniel, Chapter 2, that a sign of Armageddon will be one whose “head was of fine gold, his breast and his arms of silver”? Not for nothing has there been so much attention to Trump’s hair and money.

Repent, cry out Mitt Romney and other prophets of the old Republican guard/god. Abandon your idolatrous ways! 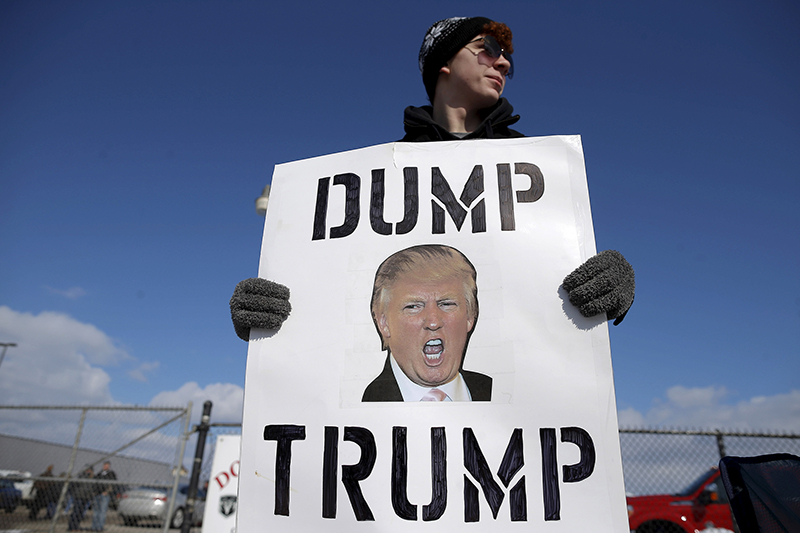 A protester demonstrates outside a campaign rally for Republican presidential candidate Donald Trump in Cadillac, Mich., on March 4, 2016. Photo courtesy of REUTERS/Jim Young
*Editors: This photo may only be republished with RNS-PALLY-COLUMN, originally transmitted on March 9, 2016.

“What fault did your ancestors find in me, that they strayed so far from me? They followed worthless idols.” Hard to tell if that’s Jeremiah 2:5 or the Republican National Committee.

The opinion pages of USA Today warn about the “perils a Trump presidency would bring.”  Romney called Trump a phony, a fraud, a business failure, greedy and a misogynist.

Jeb Bush called him a bigot, a fraud, a false conservative, a loser and worse than Obama, Ba’al to the Republican faith.

Cruz called him a Hillary supporter — now that’s chasing after false gods if there ever was such a thing.

Rubio accused him of “dirty tricks.”

The political satirist John Oliver — on the other side of the aisle — compared Trump to a cancerous mole and a chimp that tears your limbs off. He then added that Trump was a serial liar, an advocate of war crimes and defrauder of the public.

So a vote for Trump would not be just a poor political choice. It is The End. It would, as Romney said, give the election to Hillary, which is something like inviting the Babylonians, Greeks and Romans to desecrate the Holy Land.

Funny thing is, Trump sounds pretty much the same. His jeremiad is that all the other candidates are not just poor choices on policy but false gods who are leading we, the chosen people of America, to ruin.

READ: The danger and ego of Donald Trump, all in one gesture

He is the one true God, valuing himself at $3 billion, giving it the mysterious power of the Tetragrammaton. Echoing Genesis, he declares that which has his name on it will “be good.”

As Amos castigates the Israelites for following the sins of Damascus, Gaza, Tyre, Edom, Ammon and Moab, so Trump taunts those who follow Romney, Bush and Rubio.

The only way to salvation is to banish the altars of false gods and “return to me … put your detestable idols out of my sight and no longer go astray” (Jeremiah 4:1).

Political opponents lambaste each other, but this is not standard political fare. It’s politics through the narratives of America. And that, since Plymouth Rock, has been one of temptation by false gods, fallenness unto apocalypse, repentance and redemption.

In early American writings, comparisons between crossing the Red Sea and the Atlantic to enter the Promised Land were frequent and explicit.

This was the ground for New England, the first and second Great Awakenings, the holiness movements and the last half-century of Christian and evangelical renewal. 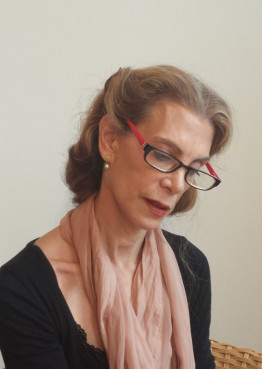 Marcia Pally teaches at New York University and is a regular guest professor at Humboldt University’s theology department in Berlin. Her latest book is “Commonwealth and Covenant: Economics, Politics, and Theologies of Relationality.” Photo courtesy of Marcia Pally

But, woven into our foundational self-understanding, it is also in the DNA of (secular) America, in our expectations, symbols and rhythms. It’s why we’re a country of optimism and fresh starts but also of apocalyptic scenarios.

We the (chosen) people follow false idols and bring the end times near. But if we return and embrace God’s ways we will build the New Jerusalem and make God’s nation, America, great again.

(Marcia Pally teaches multilingual multicultural studies at New York University and is a regular guest professor at Humboldt University’s theology department in Berlin. Her latest book is “Commonwealth and Covenant: Economics, Politics, and Theologies of Relationality”)