Donald Trump is slated to speak at the AIPAC Policy Conference Monday (March 21).

AIPAC is the American Israel Public Affairs Committee. Its mission: to strengthen the relationship between the United States and Israel. It works across all political, ethnic and religious lines. All the 2016 presidential candidates were invited to speak.

But, for many of the rabbis who will be attending AIPAC, Trump’s appearance poses political, moral, and even spiritual quandaries.

It is quite simple. Trump’s hateful rhetoric is abhorrent to a great many rabbis, for a variety of reasons. In particular, the Reform movement has eloquently spoken out on Trump.

So, since Trump is speaking at AIPAC, what should AIPAC-supporting rabbis “do” about that? Their responses run the gamut of political and ideological expression. And each of those responses has an interesting Jewish pedigree.

The first approach is what I would call the “Hoffman-Rubin” method — as in Abbie Hoffman and Jerry Rubin, the founders of the 1960s Yippies, entrepreneurs of ideologically-based mayhem. 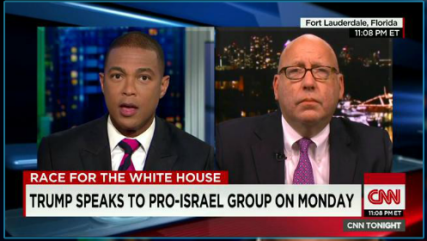 Because the AIPAC Conference is arguably the most-attended “Jewish” gathering of any given year (approximately 20,000 people — of whom a respectable number are not, in fact, Jewish), there are major concerns that Trump’s appearance reflects poorly on both Jews and Israel.

I hope that there will be no aggressive responses to Trump’s appearance. Such actions would violate AIPAC’s hospitality; guarantee that the protesters will be forcibly ejected from the hall, and would give Donald Trump extra ammunition. This is someone who has no qualms speaking crudely about women, Mexicans, Muslims, the handicapped, and immigrants; does anyone really want to add “rabbis” to his verbal hit list?

The second approach is what I would call the “Esther-Mordecai method,” which is appropriate because of the connection to Purim.

The Jew Mordecai relished his relationship with the Persian court, going so far as to tell Queen Esther that providence had put her in the palace precisely so that she could save her people from destruction at the hands of Haman.

Some rabbis say that Jews have to face the political facts. In all likelihood, Trump will become the Republican nominee for President. He could beat Hillary Clinton, and become the next president of the United States.

Therefore, Jews in general, and AIPAC in particular, must cultivate a good working relationship with this president, as they would with any occupant of the White House.

In some ways, the true Jewish archetype of this approach is the shtadlan, who in medieval Europe was the official intercessor for the Jews with the authorities. He would work as a “lobbyist,” negotiating for the safety and benefit of the Jews. The shtadlan’s role ultimately evolved into its modern-day equivalent — the alphabet soup of Jewish defense organizations (ADL, AJC, AIPAC, etc).

Implicit in this dynamic is the notion that the Jews are always vulnerable; they need friends in high places; relationships with power must always be negotiated afresh, lest Jewish vulnerabilities be exposed.

The third approach is what I would call the “Abraham Joshua Heschel” approach. This is the approach that I, and many of my colleagues, are taking.

We have been urging rabbis to simply not attend the Trump speech — to let our absence be felt and noted.

Heschel, the great theologian and social activist, was engaged with many mainstream Jewish organizations in the 1960s and 1970s. Even when he disagreed with them, he never walked away from any of them. He stuck by them and with them, speaking truth to power.

There is a second reason why we would call this the “Heschel approach.”

When Heschel marched with Dr. Martin Luther King, he quipped that he was “praying with his feet.” His most sacred principles compelled him to march.

The rabbis who absent themselves from Trump’s speech will pray with their feet.

America finds itself in a very difficult time. We have to do something.

A story: a righteous man came to the wicked city of Sodom, and pleaded with the people to change their ways. No one listened. Finally, he sat in the middle of the city and simply screamed.

Someone asked him: “Do you think that will change anyone?’ ‘

Sometimes, you just have to scream — even silently.