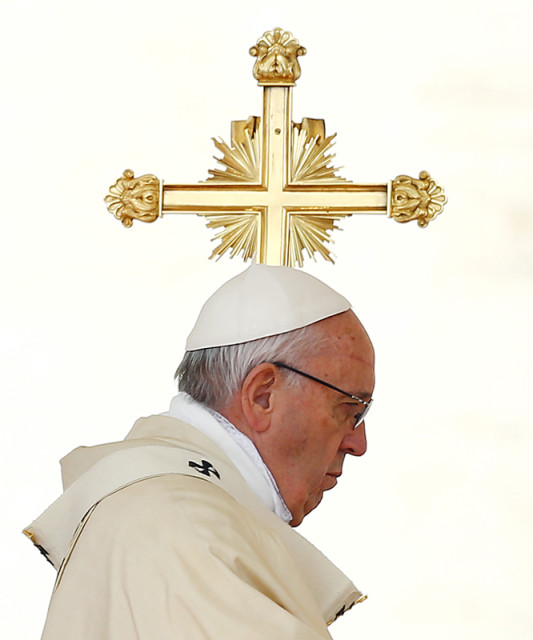 Pope Francis celebrates a Jubilee Mass in St. Peter’s Square at the Vatican on April 3, 2016. Photo courtesy of REUTERS/Tony Gentile *Editors: This photo may only be republished with RNS-FRANCIS-LEGALISM, originally transmitted on April 11, 2016.

VATICAN CITY (RNS) Pope Francis has criticized those who care more about the letter of the law than people’s individual situations, continuing to assert the overarching theme of the landmark apostolic exhortation on the family he issued last week.

Speaking during his homily at Mass on Monday (April 11), Francis warned Catholics against such behavior by recalling the day’s Scripture reading from the Book of Acts in which Stephen is accused of blasphemy by religious leaders of the day.

“Their hearts, closed to God’s truth, clutch only at the truth of the Law, taking it by ‘the letter,’ and do not find outlets other than in lies, false witness and death,” Francis said, according to the report by Vatican Radio.

Francis cited as examples of such a merciless stance the victims of witch hunts of past centuries and St. Joan of Arc, who was burned at the stake in 15th-century France.

The pope’s homily came days after he published his exhortation on the family, “Amoris Laetitia,” or “The Joy of Love,” in which he called for priests to take a more pastoral approach to people in “irregular” situations.

The book-length text included passages on how the Catholic Church should approach gay family members and remarried divorcees, among a host of other situations.

Key points from the document have been condensed into phrases published on the pope’s Twitter accounts in recent days, such as: “The welfare of the family is decisive for the future of the world.”